Sharbat Gula became the face of the struggles of Afghan refugees in Pakistan when she and her piercing green eyes landed on the cover of National Geographic in 1985. Now, Gula is once again a symbol of the ongoing problems of many Afghan refugees.

Pakistani authorities found Gula, who became known as "Afghan girl" after her National Geographic cover, living in the country under fraudulent identification, according to Agence France-Presse. Pakistani authorities accuse her of bypassing Pakistan's Computerized National Identity Cards system and applying for an ID last April in Peshawar using the name "Sharbat Bibi." 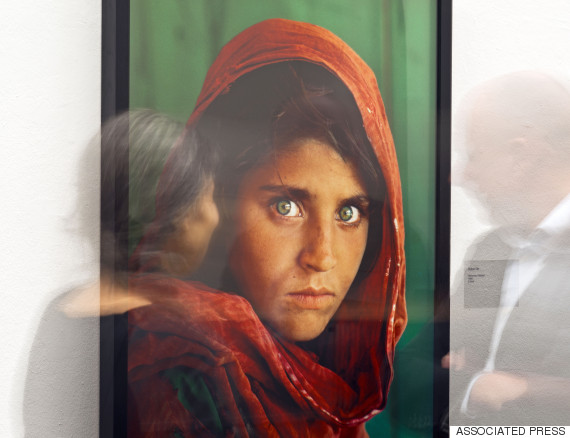 IDs were also issued to two men listed as Gula's sons, Rauf Khan and Wali Khan, according to Pakistan's Dawn newspaper. A source told the publication that it is unclear however if these men are her biological children, as refugees are known to sometimes "list names of non-relatives as their children to obtain documents." Officials at the National Database and Registration Authority are under fire for issuing the three IDs.

Almost 3 million Afghan refugees are currently living in Pakistan, The Guardian notes. About 1.5 million of them are officially registered as refugees. Afghan refugees living in Pakistan who are registered can obtain Proof of Registration documentation, according to Dawn, but they cannot get CNICs without going through a regimented process. However, CNICs are essential for completing transactions like buying property and opening bank accounts.

The photo of Gula taken in a refugee camp in 1984 ran on National Geographic's June 1985 cover. At the time, no one knew her name. In 2002, photographer Steve McCurry and a National Geographic team went to Pakistan to find her. Although she and her family left Afghanistan to escape war, she still did not feel safe when they found her 17 years later.

Had she ever felt safe, they asked?

”No," she told National Geographic. "But life under the Taliban was better. At least there was peace and order.”