By Ahmad Nadem and Ahmad Haroon

KANDAHAR, Afghanistan, March 12 (Reuters) - The killing of 16 villagers by an American soldier in Afghanistan's south could hurt Washington's efforts to reach a strategic pact with Kabul to allow a long-term U.S. presence in the country, a government official told Reuters on Monday.

Sunday's attack on the civilians, the latest American public relations disaster in Afghanistan, could be a turning point for the United States, which wants to maintain advisers there as it tries to wind down the increasingly unpopular war.

The Strategic Partnership Agreement currently being negotiated is a key part of that strategy.

"This could delay the signing of the Strategic Partnership Agreement," the Afghan government official.

Simmering anti-American anger has boiled over since copies of the Muslim holy book, the Koran, were inadvertently burned at a NATO base last month, with many Afghans insisting it is time for the Americans and their NATO allies to leave.

Those calls are likely to grow after the shooting spree in villages in Kandahar province, the heartland of the Taliban.

The civilian deaths, mostly children and women, may also force Afghan President Hamid Karzai to harden his stand in the partnership talks to appease a public already critical of his government's performance.

The partnership agreement, which Washington and Kabul have been discussing for more than a year, will be the framework for U.S. involvement in Afghanistan after foreign combat troops leave at the end of 2014.

The Kandahar violence came just days after the United States and Afghanistan signed a deal on the gradual transfer of a major U.S.-run detention centre to Afghan authorities, overcoming one of the main sticking points in the partnership negotiations.

Afghanistan wants a timeline to take over detention centres and for the United States and NATO to agree to end night raids on Afghan homes as preconditions for signing the pact.

Civilian deaths are one of the main sources of tension between Kabul and Washington, with the war in its eleventh year.

U.S. officials warned on Monday of possible reprisal attacks after the villagers were killed in a likely "rogue" shooting by a U.S. soldier that weakens the West's tenuous grip on the war.

Washington has rushed to distance the shootings from the efforts of the 90,000-strong U.S. force but faces growing criticism at home and abroad about its conduct of the war.

"The U.S. Embassy in Kabul alerts U.S. citizens in Afghanistan that as a result of a tragic shooting incident in Kandahar province involving a U.S. service member, there is a risk of anti-American feelings and protests in coming days, especially in the eastern and southern provinces," the embassy said in an emergency statement on its website.

Kandahar is the birthplace of the Taliban, toppled by U.S.-backed Afghan forces in late 2001. Southern and eastern provinces have seen some of the fiercest fighting of the war.

The U.S. embassy said on its Twitter feed restrictions had been placed on the movements of its personnel in the south.

A sharp increase in attacks on U.S. troops by Afghan forces followed the Koran burning. Sunday's incident in Kandahar was one of the worst of its kind, witnesses describing it as a "night-time massacre" that killed nine children and three women.

Villagers in three houses were attacked and many civilians were wounded, a spokesman for the NATO-led International Security Assistance Force (ISAF) said.

Deeply saddened, U.S. President Barack Obama called Karzai, promising a quick investigation and to hold accountable anyone responsible for an incident he called "tragic and shocking".

Such incidents are often quickly exploited by insurgents and the Afghan Taliban said it would take revenge.

Incidents such as the Koran burning at Bagram air base and the Kandahar shooting show the challenges that remain as foreign forces gradually transfer security responsibility to Afghans.

Sunday's attack may also harden a growing consensus in Washington about what can be accomplished in Afghanistan.

The bill for the war has already exceeded $500 billion and more than 1,900 U.S. troops have been killed, with the total number of foreign troops killed approaching 3,000.

"These killings only serve to reinforce the mindset that the whole war is broken and that there's little we can do about it beyond trying to cut our losses and leave," said Joshua Foust, a security expert with the American Security Project.

Karzai, whose relationship with his Western backers is fraught at the best of times, condemned the rampage as "intentional murders" and demanded an explanation. Karzai's office released a statement quoting a villager as saying "American soldiers woke my family up and shot them in the face".

There were conflicting accounts of how many U.S. soldiers were involved, with witness accounts saying there were several.

Officials from the U.S. Embassy, ISAF and from Washington said it appeared there was only one. An ISAF spokesman said the lone U.S. soldier "walked back to the base and turned himself in to U.S. forces this morning".

The detained soldier was described by U.S. officials as a staff sergeant who was married with three children. He had served three Iraq tours but was on his first Afghan deployment. (Additional reporting by Hamid Shalizi in Kabul, and Missy Ryan and Alister Bull in Washington; Writing by Michael Georgy; Editing by Paul Tait) 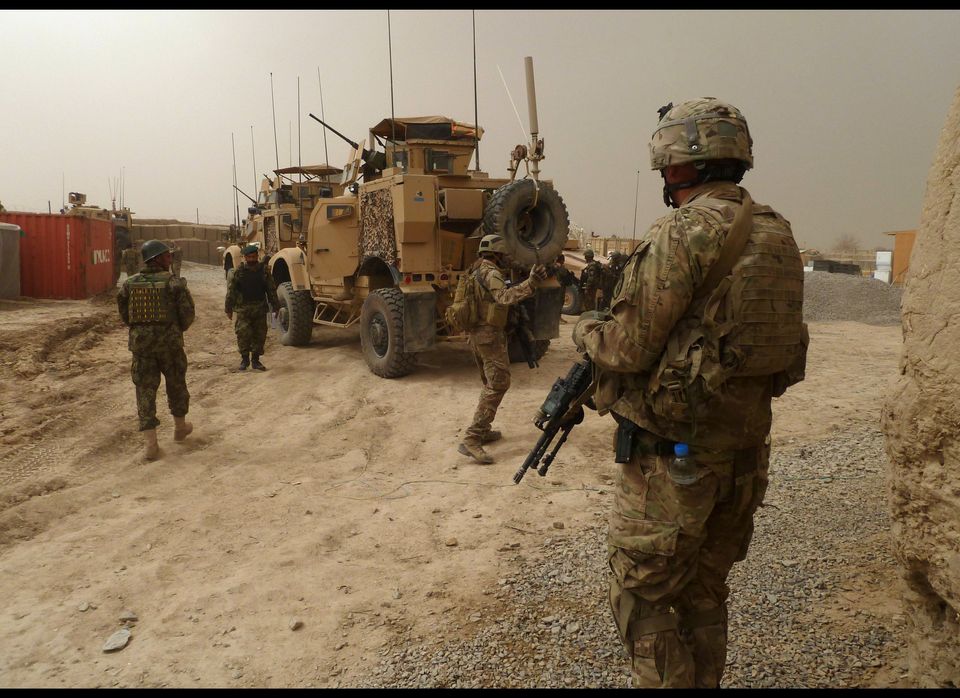 1 / 6
US soldiers keep watch at the entrance of a military base near Alkozai village following the shooting of Afghan civilians allegedly committed by a rogue US soldier in Panjwayi district, Kandahar province on March 11, 2012. An AFP reporter counted 16 bodies -- including women and children -- in three Afghan houses after a rogue US soldier walked out of his base and began shooting civilians early Sunday. NATO's International Security Assistance Force said it had arrested a soldier 'in connection to an incident that resulted in Afghan casualties in Kandahar province', without giving a figure for the dead or wounded. (JANGIR/AFP/Getty Images)
Getty