* Kabul acts on evidence or suspicion of links to militants

KABUL, Sept 5 (Reuters) - The Afghan army has detained or sacked hundreds of soldiers for having links to insurgents, the Defence Ministry said on Wednesday as it tries to stem the rising number of so-called insider attacks.

It made the announcement as NATO chief Anders Fogh Rasmussen called Afghan President Hamid Karzai to express his concern over the attacks, in which Afghan servicemen have killed at least 45 NATO-led troops this year, including 15 in August, compared with 35 for all of last year.

"Hundreds were sacked or detained after showing links with insurgents. In some cases we had evidence against them, in others we were simply suspicious," Defence Ministry spokesman Zahir Azimi told reporters in Kabul.

"Using an army uniform against foreign forces is a serious point of concern not only for the Defence Ministry but for the whole Afghan government," Azimi said, adding that Karzai had ordered Afghan forces to devise ways to stop insider attacks.

Azimi declined to say whether the detained and fired soldiers were from Taliban strongholds in the south and east, saying they were from all over the country.

He said his ministry started an investigation into the attacks, called green-on-blue attacks, within the 195,000-strong Afghan army six months ago.

In his call to Karzai, Rasmussen outlined measures taken by NATO-led forces to stop the insider attacks and he urged Karzai to join the efforts, according to a NATO spokeswoman.

NO LACK OF COMMITMENT

The commander of foreign troops in Afghanistan, U.S. General John Allen, said his troops were constantly taking new measures to counter the threat from rogue Afghan soldiers, which have been trained and armed by U.S. and other foreign forces.

Allen said he detected "no absence of commitment" by the Afghan government to counter rogue attacks.

"I believe the Afghan government is committed to doing this, again remembering it's a government that is still building its capacity," he told reporters during a visit to NATO headquarters in Brussels where he briefed ambassadors on the Afghan campaign and on the rogue attacks.

Field commanders in Afghanistan have been given discretion to post more "guardian angel" sentries, who oversee foreign soldiers in crowded areas such as gyms and food halls, to respond to any rogue shootings, officials say.

"We will seek to create ... the opportunity for us if we see something going wrong, in terms of an insider beginning to reveal himself, that we are postured ... to be able to take immediate action as necessary to defend the force," Allen said.

He denied rogue attacks had shattered trust between Afghan and foreign forces but hinted at deep-seated problems.

"It's not at a tactical level that I fear for the relationship, it is at a higher level," he said, without elaborating.

In an interview with Reuters this week, Rasmussen dismissed any suggestion that the attacks would lead to more members of the NATO-led force pulling out early from an increasingly unpopular and costly war that has dragged on with few obvious signs of success since the Taliban were ousted in 2001.

But tension is simmering. The killing of three Australian troops by an Afghan army sergeant in the south last week prompted a deadly raid to find the rogue soldier and led to a war of words between Canberra and Kabul.

U.S. forces said on Sunday they had suspended training new recruits to the 16,000-strong Afghan local police, a militia separate from the Afghan national police, following the spike in insider attacks. (Additional reporting by Adrian Croft in Brussels; Writing by Amie Ferris-Rotman; Editing by Robin Pomeroy) 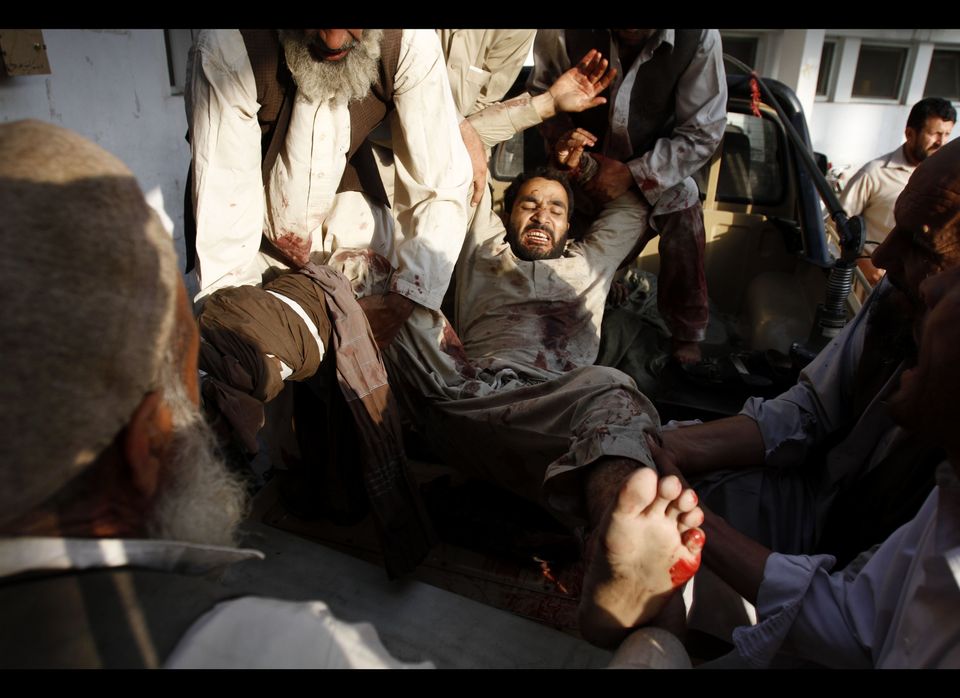 1 / 6
An injured Afghan man is carried into a hospital after a suicide attack on a funeral in the Durbaba district of Jalalabad, east of Kabul, Afghanistan, on Tuesday, Sept. 4, 2012. (AP Photo/Rahmat Gul)
AP