Over the weekend an article titled "Afghan Women Fear Loss of Modest Gains" appeared in the New York Times. The writer, Alissa J. Rubin, repeated a theme that has been popping up all over the media these days: That while we have made progress, albeit tentative, if the U.S. pulls out of Afghanistan, we will condemn the Afghan women to a dark and terrifying fate.

The Times' article, like others, highlighted that there is no doubt that the Taliban threat is real and constant. While it is true that they have hindered progress, and created an environment of fear, instability and violence, that is not the entire picture.

In the aftermath of 9/11 there were numerous articles about the daily horrors of how life was for Afghan women and how they lived in constant terror. But we also learned that even during the darkest days of the Taliban, women operated salons in back rooms, which provided them with an income and a place where they could gather, let their hair down and just be girls.

So I was shocked to read theTimes' article and learn that its symbol of the "progress" that has been made is a beauty salon/school that isn't much different than what was there nine years ago. Back then, the beauty salons were equipped with very few tools of the trade and provided limited training. As any hairdresser worth her salt will tell you, giving someone a few products and showing them how to cut split ends against a dingy and depressing backdrop does not a hairdresser make...

Their greatest fear then was, as is now, as the recent Times' article recognizes, "No one seems to be listening to them."

Almost nine years ago we set out to change that -- and for a brief moment we did.

Inspired by the plight of Afghan women, I, along with a friend, Terri Grauel, decided to create "The Beauty School of Kabul." 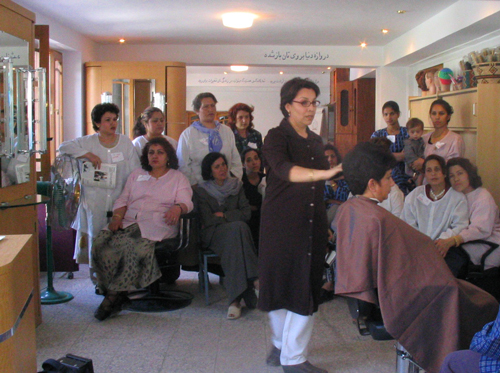 Once the idea was in motion, we decided that we wanted to develop a school that was on par with anything in the West. A school where the women could benefit from all our years of learning, a "modern" place where they could obtain a real professional education -- not some backroom, hole-in-the-wall with a few tools and products. What we built amid the rubble of Kabul was an oasis in the middle of hell.

At first the women were closed off, suffering from low self-esteem, and probably depression. Laughter was rare, and in the early days we worried that we had set the bar too high. Slowly but surely many of the students began to grasp the concepts we were teaching, and they would help teach the other students. With each breakthrough you could taste the joy in the air, and the invisible barriers that made the women seem like strangers to us began to fade.

One day a student asked me how long women in the West had been free and independent. I told her a 100 years or so, but real changes had only happened in the last fifty years. She was shocked. As she revealed this to her classmates, the room became alive with excited chatter. Knowing that Western women had achieved this in such little time, and not over 500+ years as they had thought, gave them hope that they too could be free and independent. 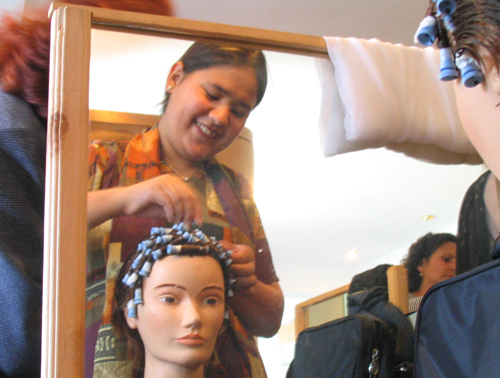 During that time, Kabul was chock-a-block with white jeeps ferrying key personal around town from USAID, UNDP, UNIFEM and other government-funded organizations as they set about to implement programs to give Afghan -- and especially Afghan women -- a shot at a better future.

Our program ran on fumes and a vision. But we challenge anyone who was in Kabul at that time to name any NGO or UN-funded offshoot that came close in terms of delivering a first-world professional education in a modern environment.

The night the women graduated we threw them a party. Some would say it was reckless, as we were completely broke. But anyone who witnessed their excitement and joy in the days leading up to the party, as they discussed what they were going to wear and who was coming, would lack humanity to deny these brave women the chance to show of their accomplishments.

That evening we watched as men and women from different families laughed and talked together -- a mingling of the sexes, something I was told could never happen in Afghanistan. As the graduation came to a close the men -- husbands, fathers and grandfathers -- thanked us for helping their families. Because of us their wives, daughters or granddaughters were earning money, putting food on the table and helping them survive.

So what has really changed since then? Sadly, it seems not much. Here we are nine years later, countless lives lost, a trillion dollars spent and what do we have to show for it?

The Times' article quotes an Afghan woman named Habiba Shamim, one of the beauty school instructors.

"Please," she pleaded. "Carry our words to people."

So, Secretary Clinton, are you really listening?

If you really want to improve the plight of Afghan women, perhaps you should start with taking a long hard look at the decision makers and purse-string holders at the UN, its offshoot organizations, USAID, and various US government oversight committees who have received billions of taxpayer dollars.

While there are numerous front-line people at these organizations who are dedicated and committed to solving a multitude of problems around the world, it seems that for our investment, particularly in regard to Afghan women, we have barely moved the needle.

For a brief and fleeting post-9/11 moment, all of us living in the West thought that we could make it right. Unfortunately, for Afghan women, it didn't happen. But heck, you already knew that.