Here in Kabul, Voices co-coordinator Buddy Bell and I are guests at the home of the Afghan Peace Volunteers (APV), where we've gotten to know four young boys who are being tutored by the Volunteers in the afternoons, having "retired" from their former work as street vendors in exchange for a chance to enter a public school. Five afternoons a week, Murtaza, Rahim, Hamid and Sajad wheel their antiquated bicycles into the APV "yard." They quickly shake the hand of each person present and then wash their feet outside the back door before settling into a classroom to study language, math and art, tutored in each subject by a different Volunteer. They've cycled here from school through heavy traffic, which worries their mothers, but the families cannot afford for the boys to take a public bus. Today, their mothers were here to observe the class, quietly sipping tea as they watched the two youngest boys practice writing the Dari alphabet (Dari is an official Afghan language), while the older boys, age 12 and 13, took turns reading, in Dari, a chapter about the respiratory system from an elementary school science book. The APVs hope to help the mothers learn tailoring, so they can become tailors in the community and earn a modest income. 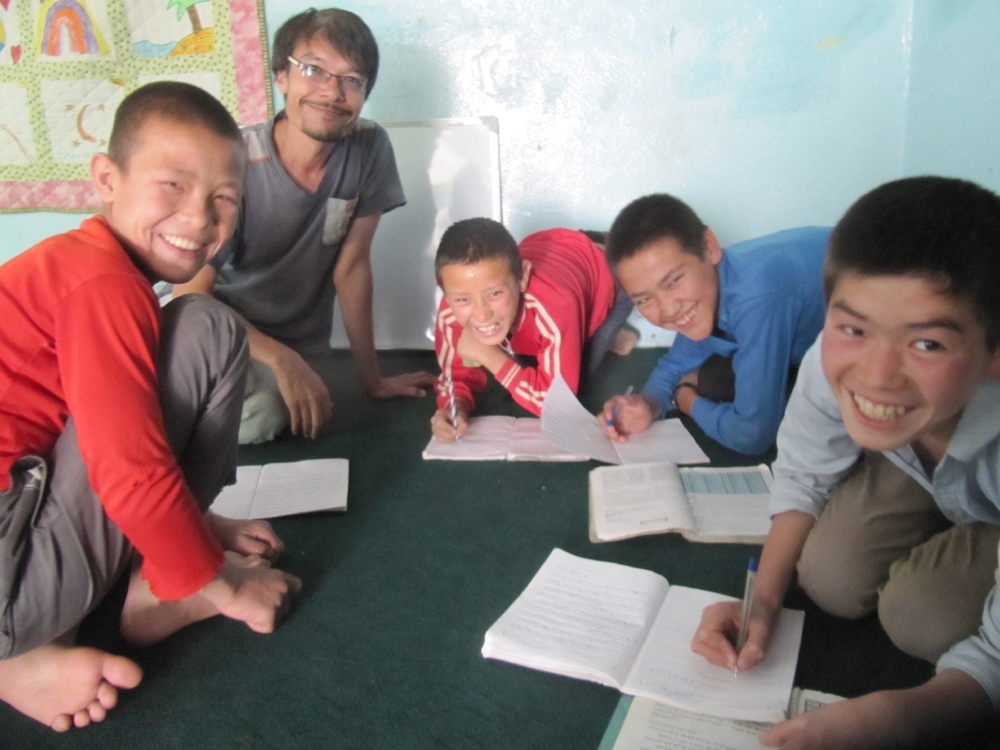 Later, the boys played volleyball, and when the ball went over the wall as it often does, the three of them switched to a makeshift game of ping-pong using their plastic sandals as paddles, while Rahim climbed to the top of a tree, walked confidently on the ledge of the wall and then jumped about fifteen feet to the ground below to retrieve the volleyball. The mothers, Fatima, Nuria and Nekbat, are overjoyed to see their children getting an education, and smiled as they expressed their thanks for a few hours of quiet, in their homes each morning, with the young and sometimes mischievous boys away at school.Nuria, the youngest, is mother of Rahim and Hamid. She hopes they can escape the tragedy that has befallen her husband, who has become addicted to opium. By washing clothes, she earns a small income to support the family. Murtaza's mother, Fatima, takes care of Murtaza's father at home -- an earlier illness left her husband paralyzed from the waist down. Most of her right hand is scarred from where she scalded it while baking bread in a tandoor oven. Sajad's mother, Nekbat, appears to be in her late forties. Recalling her own years growing up in Kabul during earlier Afghan wars, she spoke about family members being without work. There was little food and children couldn't go to school. Eventually, her parents, displaced by war, would take the family and seek refuge in Iran. Nuria remembers fleeing as a child from one area of Kabul to another, running from killings and attacks waged by Massoud, Gulbuddin and others. The women still hear stories of people who are fleeing attacks in the Hazarajat area, where Kuchi and Hazara groups are fighting, and they know many people who have recently arrived in Kabul as refugees from areas gripped by war. The fighting has increased in the past few years. Previously, borders were more porous and people could flee. Now the borders appear to be closing down. The mothers teach their children that war is always wrong, that it brings sorrow, and that the children should find productive work rather than enlist, as so many do on all sides of this conflict, often because they want to help feed their families. In Afghanistan, "women have a bad situation," said Fatima. "We are illiterate, and we can't find work that will help us meet expenses." They pay one to two thousand Afghanis a month for rent. Their homes are compounds where several families share one kitchen. Bread, potatoes, and tea without sugar constitute their normal daily meals. Fatima recalls the past winter which was particularly harsh. They couldn't afford fuel and had to find other ways to keep warm. But Nuria adds that all the seasons present constant problems, and it is always difficult for the family to make ends meet. Asked whether they could recall ever getting a day off from work, the women answered in unison, "No." Asked about the notion that the U.S. is protecting Afghan women, Nekbat said that whatever officials claim in this regard, they are bringing no help. These women have seen no improvement in Afghanistan, and neither, they claim, has anyone they know. They don't travel in the circles of those most likely to meet and speak with Western journalists, and poverty and the uncertainties of war seem to dictate their lives more surely than any government. They tell me all foreign money is lost to corruption -- no one in their communities sees it going to the people. Although no government official or journalist ever asks them about the conditions they are facing, they know the West is curious; the mothers are aware of the drone aircraft -- planes without pilots, some of them armed with missiles, with cameras trained on their neighborhoods. The drone cameras miss a lot. Nekbat adds that even when people come through to witness firsthand the suffering of common Afghans, she is sure this news never reaches the ears of Karzai and his government. "They don't care," she said. "You may perish from lack of food, and still they don't care. No one hears the poor." One hospital in Kabul, the
Emergency Surgical Center for Civilian War Victims
, serves people free of charge. Emanuele Nannini, the chief logistician for the hospital, reminded us, the previous day, that the U.S. spends one million dollars per year for each soldier it deploys in Afghanistan. "Just let six of them go home," he said, "and with that six million we could meet our total annual operating budget for the 33 existing clinics and hospitals we have in Afghanistan. With 60 less soldiers, the money saved could mean running 330 clinics." Just before leaving Chicago, while the NATO summit was convening, Amnesty International announced its intention to campaign for NATO to protect the rights of Afghan women and children. Amnesty International should talk with the Afghan Peace Volunteers and the Emergency hospital network about caring, practically and wisely, for women and children in Afghanistan. Surrounded by fierce warlords, cunning war profiteers, and foreign armies with menacing arsenals and wild spending habits, it's hard for the mothers who visited us today to imagine that the situation can ever change. And yet, before leaving us, they smiled broadly. "For us," said Nuria, "the possibility of a bright future is over, but at least for our children there is a chance."
Kathy Kelly (Kathy@vcnv.org) co-coordinates Voices for Creative Nonviolence (www.vcnv.org) which works closely with the Afghan Peace Volunteers (ourjourneytosmile.com).