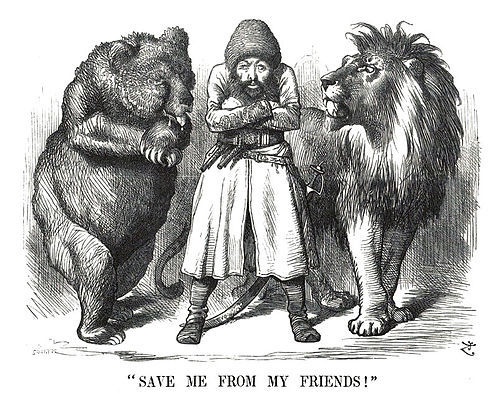 The "Great Game" refers to a period when the British Empire and Czarist Russia competed politically and economically for influence in central and south central Asia. Russia's advances in central Asia in the 19th century were regarded by Britain as a threat to their "Crown Jewel" (India). Britain thought that Russia would use Afghanistan as a launching platform to attack India and undermine their hold on the country. Thus began a great competition when Britain decided to preempt Russia by sending an expeditionary force to Afghanistan in 1838, dubbed the 1st Anglo Afghan war. The British forces installed a puppet king, Shah Shuja, but his reign was short lived and disastrous for British forces. This Great Game continued until the first part of the 20th century when Britain recognized Afghanistan's independence at the conclusion of the 3rd Anglo Afghan War in 1919.

The Cold War brought another deadly game to south central Asia when the communist Kremlin Czars decided to install another puppet regime in 1978, the People's Democratic Party of Afghanistan (PDPA). PDPA was headed by Taraki, who like Shah Shuja did not last very long. The Red Army then directly invaded Afghanistan in 1979 to keep their PDPA puppets in power, as they were on the verge of collapse. The United States entered the foray in the early 1980s by supporting the various groups fighting the occupying Red Army. The US support to the Mujahedeen factions who had sanctuaries in Pakistan continued until the defeat of the Soviet troops. The Red Army withdrew from Afghanistan on February 15, 1989. Soon thereafter the Soviet Union itself collapsed, ushering in the end of the Cold War and the subsequent US disengagement from Afghanistan. 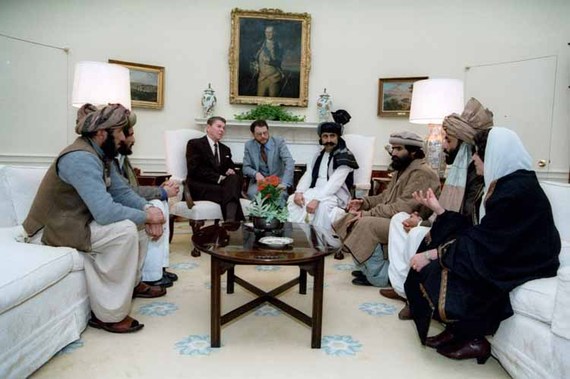 Mujahedeen Commanders with President Reagan in 1985

Although the US and its coalition partners went to war in Afghanistan again in 2001 in response to the attacks on US soil in September of that year, this involvement was not in response to a regional superpower competition. It therefore could not be characterized as a "great game" in which Afghanistan was a pawn. However, 15 years later, with US troops still in the country, Afghanistan may again find itself in a new great game. This new great game is the result of an assertive Russia under Vladimir Putin with an eye on central and south central Asia. Putin also challenges US involvement in the Syrian conflict and in Eastern Europe in hope of recreating the glory days of Czarist Russia or the former USSR.

In January of this year the Quadrilateral Talks aimed at relaunching peace talks between the Taliban and the Afghan government were initiated. The participants are Afghanistan, Pakistan, China and the US. The Taliban have thus far been absent, but the group has come up with a road map for future negotiations with the Taliban. Russia has been dismissive of the talks, indicating that the efforts will not lead to a political settlement. While Russia and the US had a common goal of favoring Afghan stability, this is no longer the case. Russia in competition with the US wants to go it alone in combating terrorism, a route that serves its own interests.

To this end there have been reports of a certain rapprochement between Russia and the Taliban. Russia thinks that two U.S. allies, Saudi Arabia and Turkey, are behind the emergence of the ISIS branch in eastern Afghanistan. The "classic" Taliban see ISIS in Afghanistan as competition, encroaching on their turf. So while historically there is no love lost between the Taliban and Russia, the enemy of my enemy is my friend creates the atmosphere for this rapprochement. There are thousands of radical Muslims from the Russian controlled Caucuses who have joined ISIS in Syria. Russia, with its history of suppressing the Chechen separatists, fears that ISIS will cause problems for Russia. 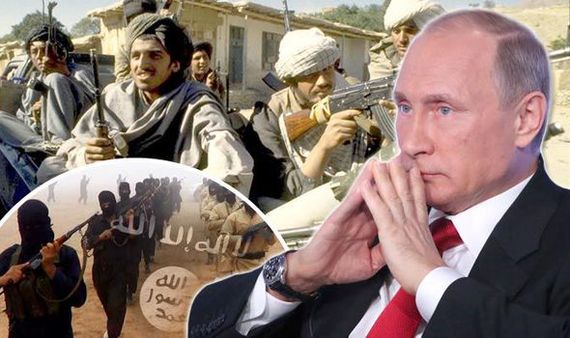 Although the current Taliban leadership has stated that they have no desire to expand beyond Afghanistan, in theory they are not very different from ISIS in terms of their ambitions to create a theocratic state transcending all borders. This means that a victory by the Taliban in Afghanistan could be a threat to Russia's interests in the mostly Islam dominated countries of central Asia. But for the Kremlin a short term gain outweighs a longer term potential problem.

Unfortunately for Afghanistan, which has suffered from decades of strife, the new great game imposed by Russia and Pakistan (harboring the Taliban) does not bode well. The Afghan leadership, for the past 15 years, has squandered the tremendous opportunity given to it by the US and other countries to build a viable nation state. Politically, the current government of unity is anything but united and militarily it is not up to the task of defending itself. Afghanistan is, therefore, ever more dependent on the U.S. and its allies for security and an economic lifeline, making it a very weak pawn in any game!