For the last three or four days, I have been asked a question nearly a hundred times: 'what are the election results?' From my neighbors next door to the taxi drivers, colleagues and local and foreign journalists, everyone is impatient to know the outcome of the much-discussed, controversial Afghan elections that were held on August 20, but two months passed and no one has a clue about the real situation. One day it seems that a runoff will be the result but the next day there is a strong possibility that President Hamid Karzai is going to be declared as the winner. On the third day it appears there is a possibility for 'negotiations' and a 'coalition government.'

At first, it was expected that the UN-backed Election Complaints Commission (ECC) will announce its findings of the fraudulent votes on Monday afternoon and the final results will be announced after many delays. But, instead of a public announcement, the ECC submitted its findings only to the Independent Election Commission (IEC) today and the mystery remains lingering. The IEC officials are allegedly 'Karzai supporters' and many doubt if it will accept the findings. Now the only answer we have is that: 'this is an election without results.'

The ECC findings, according to The New York Times, 'could force a runoff vote with Mr. Karzai's top challenger' because 'a Western official familiar with them [the findings] said they appeared likely to show that President Hamid Karzai had won about 48 percent' (A candidate needs 50% plus 1 vote to win). If the IEC accepts and announces the final results and decides a runoff, there are chances that President Karzai's supporters refuse to accept the decision. 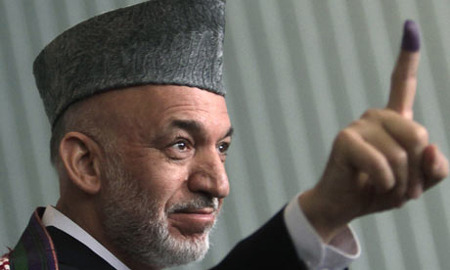 'Mr. Karzai's campaign officials have complained about the work of the five-member panel [ECC], saying that foreigners were unfairly influencing its outcome. And Mr. Karzai himself indicated this weekend that he might oppose the results,' added the Time's report.

The 'unfair influence of the foreigners' and the possibility of a runoff election have already provoked protests in some parts of the country. On Sunday, hundreds of President Karzai's supporters held a demonstration against the possible runoff in the Spin Boldak district of Kandahar province, President Karzai's hometown and Taliban stronghold. A similar protest was reported from Ghazni province where the protesters said they would not accept a second round of the election because they had voted for President Karzai and they wanted only him as their leader.

'I would never have voted if I knew it was just a drama, not an election,' said Bashir, a 36 year old shopkeeper, showing his vote finger, the indelible ink still on it. Before the election, he traveled to his village in Logar province every two weeks to see his family. But after the election he could not go because he feared his finger might be cut off by the Taliban fighters who have strong presence in his village, at least during the night time. Majority of the Afghans now share the same view as Bashir's. They think that the international interference in the election process was too much, and it was the United States who decided the country's new leadership, not the Afghan voters.

Answering the question about the massive frauds in the election process, Bashir said: 'Why did the US and the UN let the Presidential candidates to use the warlords and manipulate the results in the first place? Why did they hail the election process as a "success" on the first day? And why did they force Karzai and Abdullah for a power-sharing deal?' While we were talking about this, a local radio, which Bashir listened to regularly in his shop, announced that the United States might not send the additional troops before there is a 'credible Afghan partner' in place.

The American officials, including Senator John Kerry, who recently visited Kabul, 'pressed President Hamid Karzai to accept a runoff vote or share power with his main rival, Abdullah Abdullah.' These remained the only choices after the reports of massive vote frauds were out, which the UN's special representative, Kai Eide, acknowledged only after a row with his deputy, Peter Galbraith, about 54 days later.

Undoubtedly, the acknowledgment undermined the already controversial election process in many ways. People got skeptical about UN's role, but many thought it was crucial to find a way to avoid tension and conflict between the supporters of the two main rivals. If President Karzai was declared as a winner, the Abdullah camp would not accept it because of the now plenty evidence of rigging. There are many problems with a runoff too. First, President Karzai would not accept it. Second, the Afghan Constitution says it must be done within two weeks which seems impossible in the present circumstances. And third, many people don't want to vote again. So now the only option is a coalition government, which is of course the desire of the world powers involved in Afghanistan. But forming a coalition government is also not easy. For Afghans it means a weak government which can be dissolved any time.

For President Karzai, it means giving the ministries to his rival which he had promised to his supporters (influential commanders and tribal leaders) during his election campaign. If he resists against this option too, it will make the situation more complicated and difficult. At the end, the result might be 'no results for this election.'

us kabulWarTerrorismkandahar
Go To Homepage