A pair of sacred statues that the Taliban destroyed in Afghanistan have been recreated by enormous 3-D light projections.

The Sunni Muslim Taliban forces blew up the Buddha statues in March 2001 as an act of religious terror. Leader Mullah Omar declared that they were false idols and forced local workers to blow them up. The statues were carved into cliffs in Afghanistan's Bamiyan Valley, a World Heritage Site, about 1,500 years ago, and have lay in rubble for more than a decade.

Chinese documentarians Janson Yu and Liyan Hu created huge projections of the statues over the weekend, according to The Atlantic. They journeyed to the Bamiyan Valley after UNESCO and the Afghan government gave them permission to debut their work. 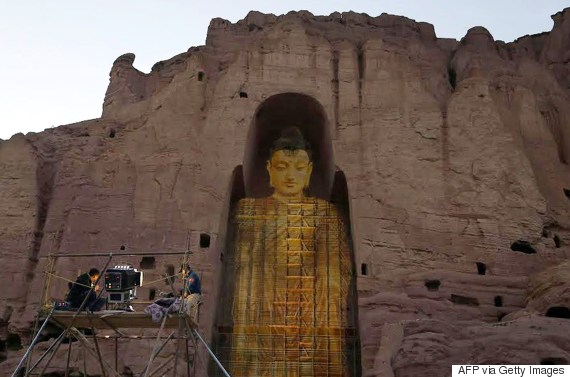 The ghostly 3-D light projections filled the immense cutouts in the mountains where the original stone statues once stood. Over 150 people watched the spectacle, The Atlantic reported.

There was an international outcry after the Buddha statues were demolished, but UNESCO, archaeologists and the Afghan government haven't been able to agree on whether the statues should be restored.