A few years ago, during a presentation at my alma mater, Muhlenberg College, I met a young woman who was in her first year at the college. We quickly learned that we had more in common than our college. Mahsheed Mahjor and I share another bond: Vital Voices, an international non-profit, which identifies, trains and empowers emerging women leaders and social entrepreneurs around the globe, enabling them to transform lives, and to accelerate peace and prosperity in their communities. Mahsheed was an ANNpower Fellow at Vital Voices and I am a Global Ambassador. Mahsheed created The Afghan Youth Reading Association, now known as The Book Cottage, a library and reading/discussion group in Kabul. As Mahsheed said, "Many Afghans don't read for pleasure and for its own sake. I want to create a reading culture." For Mahsheed, reading is fundamental to education, which, in her view, is one sure way to lift Afghanistan and the Afghan people to a brighter future.

We share something else that transcends places, institutions, organizations, and generations. We're deeply committed to social justice for everyone and we're focused on doing all we can to reduce and prevent conflict. We know that for our world to change, women must be full participants and leaders in the process. This is not today's reality, but it can be and it will be. Partnerships, honest and respectful dialogue, and a deep abiding belief in the power, and imperative, of diversity are core principles for us. What began as a brief meeting on a college campus evolved into a mentoring relationship, but more importantly, a deep friendship. Mahsheed has returned to Kabul to run The Book Cottage each summer, but this year, she remained in the U.S. for an internship. Mahsheed shares her perspectives on her nation, her government, and her fellow Afghan citizens, in the wake of the horrific July 23rd suicide bombings in Kabul:

When united educated Afghans rise against injustice, inequality and discrimination, hope for peaceful and democratic Afghanistan rises as well.

I am a Hazara girl from Afghanistan. Currently, I am a college student in the United States and that is why I am not able to be physically present in the protests in Afghanistan. However, I have always felt the pain that my people have experienced, and continue to experience. Thus, I have chosen writing, as many of my fellow Afghans have done as well, as a tool to advocate for my people who have faced discrimination and injustice throughout our country's history. The Enlightenment Movement pushback is but one unjust behavior by a disappointingly corrupt Afghan government.

The Enlightenment Movement was started by the Hazaras, the minority Shia Muslim ethnic group of Afghanistan. The movement was sparked when the government made changes to the planned Uzbekistan-Tajikistan-Afghanistan-Pakistan (TUTAP) electricity project, which was intended to help coalesce Afghanistan's disparate electrical grids. Originally, the line was to pass through Bamiyan, a predominately Hazara ethnic province in north-central Afghanistan. However, the government changed the route and now intends it to pass through Salang. This project will have tremendous economic development benefits, especially for the region that the route will transverse. This change has negative repercussions for the Hazara people, who have routinely been excluded from the development process. Despite the fact that Bamiyan is one of the most historic and touristy provinces of Afghanistan, and is known to much of the world as the site of the ancient Buddhas, destroyed by the Taliban in March of 2001, it is one of Afghanistan's poorest provinces which our government has often neglected. Our government has failed, consistently, to implement projects which would improve the living situation of all people in the province. 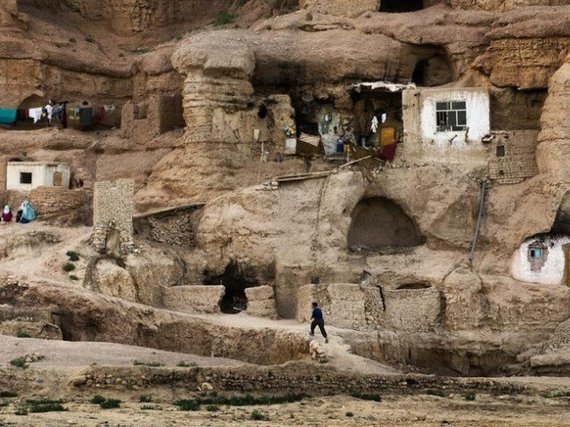 Many people in Bamiyan live in these manmade caves in the mountains without any basic living needs such as water and electricity. Source

However, the movement and the protests have gone beyond Bamiyan and the electricity project. In the recent protests, participants raised their voices against the systematic discrimination that Hazaras have faced in Afghanistan throughout history. On Saturday, July 23rd, suicide bombers created death and destruction during a peaceful protest, which killed more than 80 people and injured over 200, some of whom are dying due to lack of medical attention. The pain and sorrow of their families, friends, and those of us who share the same ideals for equality, are absolutely indescribable. Although ISIS claimed responsibility, there are those, such as the organizers of the protest, those who participated, the family and friends of the victims, and Afghan justice advocates, who remain skeptical and are demanding that an "impartial international committee" investigate the explosions.

After the bombings, it was not just the Hazara people, but people from other ethnic groups, who joined the Enlightenment Movement by giving blood to those who were injured and by spreading the movement's goals of, and demands for, justice and equality. Some non-Hazara, ethnic groups spoke of their admiration for the civil and peaceful protests by Hazaras on social media platforms. And many Afghans from different ethnic groups participated in the Enlightenment movement on Twitter through the hashtag Roshnayee (light).

Movements such as the Enlightenment Movement are setting an example for Afghans to exercise their civic rights. And that is why these uprisings must be taken seriously because we believe that, in the long term, they will have effective results. This "young unity" among educated Afghans is a spark of hope in today's Afghanistan, where each ethnic group's corrupt leaders clash with each other over authority. This unity among the new generation is one of the greatest factors that makes Afghanistan hopeful for a better and brighter democratic future, a future in which all ethnic groups rise together against discrimination, injustice and inequality, and one which does not allow the people in government and those with power to treat a fellow Afghan as a second class citizen. With this unity we can ensure that all provinces like Bamiyan are treated fairly and afforded equal development opportunities. 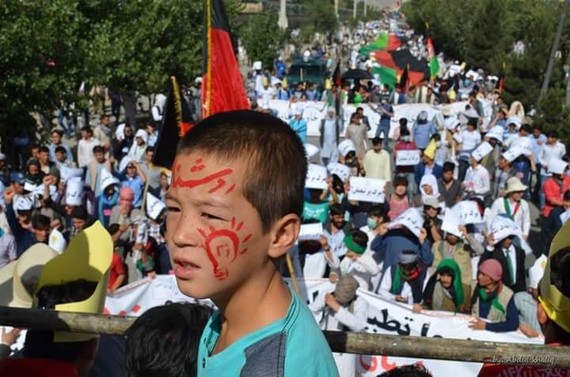 The protesters that are moving forward and the little boy that a lamb has been drawn on his cheek symbolically and on his forehead in Farsi it is written 'Enlightenment' Source: Social Media.

Afghanistan's history, from brutal monarchies to the invasion of the British and the Soviet Union to Civil War to the Taliban regime and to the current unstable and insecure situation, has made life exceptionally difficult for its citizens. Throughout history, the avaricious ethnic leaders played dirty political and social games for entitlement, money, and power. The victims of these games are consistently innocent Afghan civilians. Now it is up to us, the young and new generation, to stop them from going further down this road. Our generation, with our knowledge and our educated judgment, must get behind the wheel and drive Afghanistan in a direction that gives our generation, and the generations after us, prosperous lives; lives in which all ethnic groups will live beside one another, respecting and rejoicing in each other's similarities and differences, and creating a government that will work towards developing every province fairly and treating every citizen equally. We, the educated Afghan generation, must not be trapped in the footsteps of the corrupt traditionalist ethnic leaders. For a democratic Afghanistan, Afghans need to put their prejudices behind and move forward with unity, education and consciousness!

The Enlightenment Movement is a beacon of hope, an example of the new generation of Afghanistan's vision and determination, a generation that has invested in education and forward thinking and action. It is our responsibility, as Afghans, along with the international community, to not allow the blood of those who were killed and injured on July 23rd to be wasted. As a member of the Enlightenment Movement, I call upon my government to talk with, and listen to, us. It is time to negotiate and reason, not to use guns and bullets. We know the way forward is together and we demand that our generation have its fair share in the government based on our merit. Together, we will ensure a secure and democratic Afghanistan. Our Enlightenment Movement is just the magnificent beginning.

Mahsheed Mahjor, an Afghan citizen, is attending Muhlenberg College in the United States. She writes for two Afghan publications, Etilaat-e-Roz and Jamea-Baz on women's rights, politics and social issues. 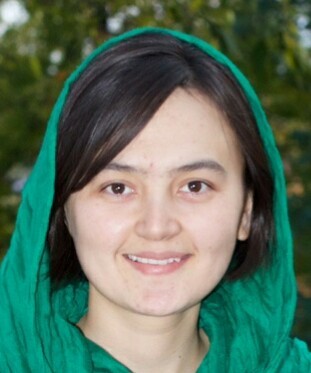