In Kabul, police station number 1 rises like a castle from the glittering, stinky chaos of Mandavi Bazaar, protected by a high wall and armored jeeps parked in its yard. Police officers rest with their Kalashnikovs in a small, overgrown garden, while on the top floor of the building an overweight, mustachioed man in uniform sits on a chair guarding an office door. Suddenly, the door bursts open, and the policeman springs to his feet as the sound of his clattering assault rifle fills the air.

When Brig. Gen. Jamila Bayaz appears, people move. Flanked by four bodyguards running behind her, Bayaz doesn’t wait — for anyone — as she descends a staircase and one of her guards shouts instructions into a walkie-talkie. When she enters the yard, her resting officers leap up. Here, this brigadier general is the boss. And she’s the only woman in Afghanistan who has managed to become chief of police. How? “Simply because I’ve been in the job for a very long time,” Bayaz says dryly, after grinding her strong jaw back and forth above the knot of her headscarf.

Bayaz has been in the police force for 30 years — just not consecutively, of course — for five years, under the Taliban’s rule, Bayaz and all women weren’t permitted to work, unless they became a nurse or doctor, and girls older than 8 weren’t allowed to attend school. Women were permitted to leave the house, but only if a male relative accompanied them and they wore a burka. Even at home the ground-floor windows had to be blacked out so no one caught a glimpse of an unveiled woman. “I can still remember how women were lashed in public here in Kabul back then,” says Bayaz, a mother of five children.

Now Bayaz has an ambitious plan: to help change Afghanistan by recruiting more women into the country’s police academy. “More women also means more security,” says the 50-year-old. Since her appointment in January, girls have repeatedly asked how they can join the force. Her response: education. “The same applies to them as to everyone who wants to be successful in this country,” she says. 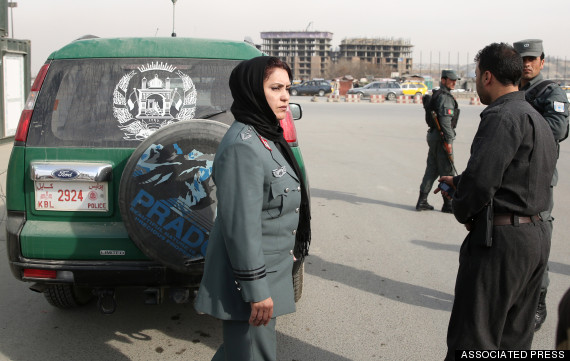 But there’s still a chasm between Bayaz’ vision and Afghanistan’s current reality. “You do see an increasing number of women stepping out,” says Gayle Lemmon, a senior fellow for women and foreign policy, with expertise on women in Afghanistan, at the Council on Foreign Relations. But, she adds, “A lot of these women face challenges.” Today, up to 37 percent of children attending Afghani schools are girls. Yet only 2 percent of police officers working in the Hindu Kush region are female, or around 2,000 in total. As their highest-ranking officer, Bayaz faces a particular challenge when the final sections of the International Security Assistance Force (ISAF) withdraw from Afghanistan at the end of this year. That’s when the self-proclaimed holy warriors will likely regain strength. And while the Afghan armed forces have taken over responsibility for security in most parts of the country, the fighting moved dangerously close to Kabul this past summer. Indeed, Bayaz sees a real threat looming in the near future, having depended on the forces. “The Taliban will definitely destroy many things in Afghanistan when the international troops withdraw.”

Meanwhile, government officials in Kabul and Washington have repeatedly failed at brokering peace with their enemy — and they’re still scrambling. Immediately after his inauguration, President Ashraf Ghani of Afghanistan called on the Taliban to negotiate peace. If he’s unable to broker peace, the Taliban will likely refuse to recognize the Afghan constitution because it calls for the equality of men and women. Even without the Taliban in power, there have been signs that Afghani politics are becoming more conservative when it comes to women’s rights. In February, parliament approved an amendment to penal law that would have banned close relatives from testifying against the accused. In other words, a wife wouldn’t have been allowed to act as a witness against her husband in a domestic abuse case. The law fell through only after former President Hamid Karsai refused to sign it.

In recent months attacks on certain women — politicians, aides and, yes, even police officers — have significantly increased. “Like men, they’re [also] targeted by insurgents for being part of the Afghan government and forces,” says Lemmon. But Bayaz continues to go out on patrol, even though she is not required to do so. What she’s less confident about, however, is that her country’s government will ultimately secure peace with the Taliban. “It is possible,” she says. “Whatever happens, the Taliban must obey our laws. They have to approach us if they want peace.”