By Mirwais Harooni and Hamid Shalizi

KABUL, Feb 22 (Reuters) - Four people were shot dead and dozens wounded in protests in Afghanistan which flared for a second day on Wednesday in several cities over the burning of copies of the Koran, Islam's holy book, at NATO's main base in the country.

The American Embassy said its staff were in "lockdown" and travel had been suspended as thousands of people expressed fury over the burning, a public relations disaster for U.S.-led NATO forces fighting Taliban militants ahead of the withdrawal of foreign combat troops by the end of 2014.

The U.S. government and the American commander of NATO-led forces in Afghanistan apologised after Afghan labourers found charred copies of the Koran while collecting rubbish at the sprawling Bagram Airbase about an hour's drive north of Kabul.

It failed to contain the fury. Thousands of Afghans took to the streets again, chanting anti-American slogans.

Winning the hearts and minds of Afghans is critical to efforts to defeat the Taliban. Similar incidents in the past have caused deep divisions and resentment among Afghans towards the tens of thousands of foreign troops in Afghanistan.

Seven foreign UN workers were killed during protests that raged across Afghanistan for three days in April 2011 after a U.S. pastor burned a Koran in Florida.

A protester was shot dead by police in Logar province, east of the capital, the governor's spokesman, Deen Mohammad Darwish, said.

Afghan health ministry spokesman Ghulam Sakhi Kargar said one person also died in hospital in Kabul from gunshot wounds received during one of two shooting incidents at protests in at least four areas of the capital.

Shots came from the direction of a foreign military vehicle parked outside a U.S. military base, said a Reuters witness. It is not clear who opened fire. International Security Assistance Force (ISAF) officials said they were unaware of shootings.

Later, wounded protesters along the busy Jalalabad road on the fringe of Kabul said Afghan police had fired on them.

Twenty-one people, including 11 policemen, were wounded in the capital, said Mohammad Zahir, head of Kabul police's crimes unit. They included the city police chief, Ayoub Salangi, who was hit in the ankle by a stone.

Critics say Western troops often fail to grasp the country's religious and cultural sensitivities. Demonstrations by as many as 2,000 people broke out as word of the find spread.

Police said most injuries were caused by flying stones and sticks hurled by protesters. Demonstrators had charged police lines and nearby military bases at a protest on the edge of Kabul, burning tyres and smashing vehicles and building windows.

Protesters shouted "Death to America!" and "Death to (President Hamid) Karzai" in a large demonstration on the outskirts of the Afghan capital.

"When the Americans insult us to this degree, we will join the insurgents," said Ajmal, an 18-year-old protester in Kabul.

Demonstrators set fire to part of a housing compound used by foreign contract workers. A Reuters witness said the fire damaged part of a guesthouse at the Green Village complex, where 1,500 mostly foreign contractors live and work.

Outrage also spilled over in the Afghan parliament, where several members shouted "death to America" inside the legislative chamber.

Muslims consider the Koran the literal word of God and treat each book with deep reverence.

Afghan media said demonstrations had also erupted in the province of Parwan, near the capital.

In Logar province, hundreds protested in front of the governor's office. Some threw stones. Separate protests were also under way in Jalalabad in the east. 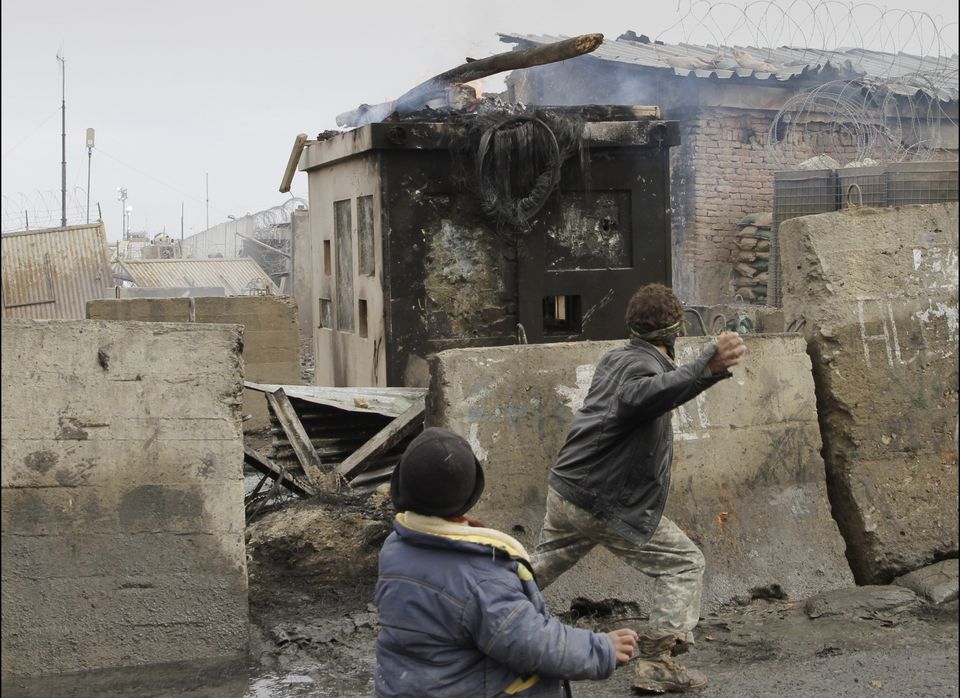 1 / 5
Afghan throw stone towards the US soldiers in front of the US base of Bagram during an anti US demonstration in Bagram north of Kabul, Afghanistan, Tuesday, Feb. 21, 2012. More than 2,000 angry Afghans, some firing guns in the air, protested on Tuesday against the improper disposal and burning of Qurans and other Islamic religious materials at an American air base in Bagram north of Kabul. (AP)
AP