KABUL, Afghanistan (AP) — Hundreds of Afghans protested in Kabul on Monday to demand justice for a woman who was killed by a mob outside one of the capital's most famous mosques after she was falsely being accused of burning a Quran.

The woman, a 27-year-old religious scholar named Farkhunda, was beaten, pushed from a roof, run over by a car and set alight before her body was thrown in the Kabul River last Thursday. Senior police officials have since maintained that the Quran-burning allegations that prompted the attack were false.

She was buried amid a huge public outcry on Sunday, her coffin carried by women's activists who defied the tradition of men-only pallbearers and funerals. 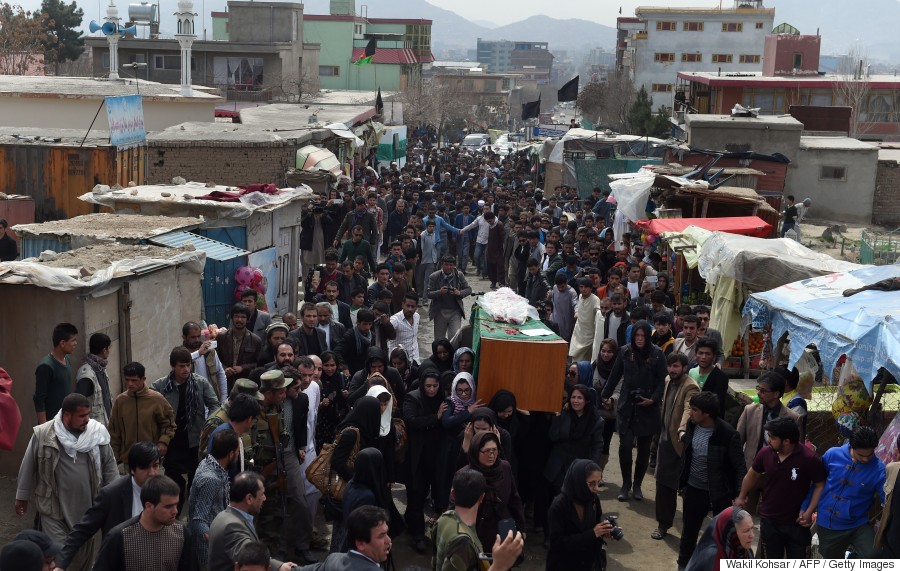 Independent Afghan civil society activist women carry the coffin of Farkhunda, 27, who was lynched by an angry mob in central Kabul on March 22, 2015.

Protesters who gathered near the Shah Doshamshera mosque on Monday demanded the government prosecute all those responsible for the death of Farkhunda, who like many Afghans used only one name.

Officials said that 13 people have been arrested, and 13 policemen based in the area of the mosque have been suspended amid allegations they stood by and did nothing to stop the attack.

One policeman who was present during the attack said the police were overwhelmed by the size of the crowd, which grew throughout the attack. 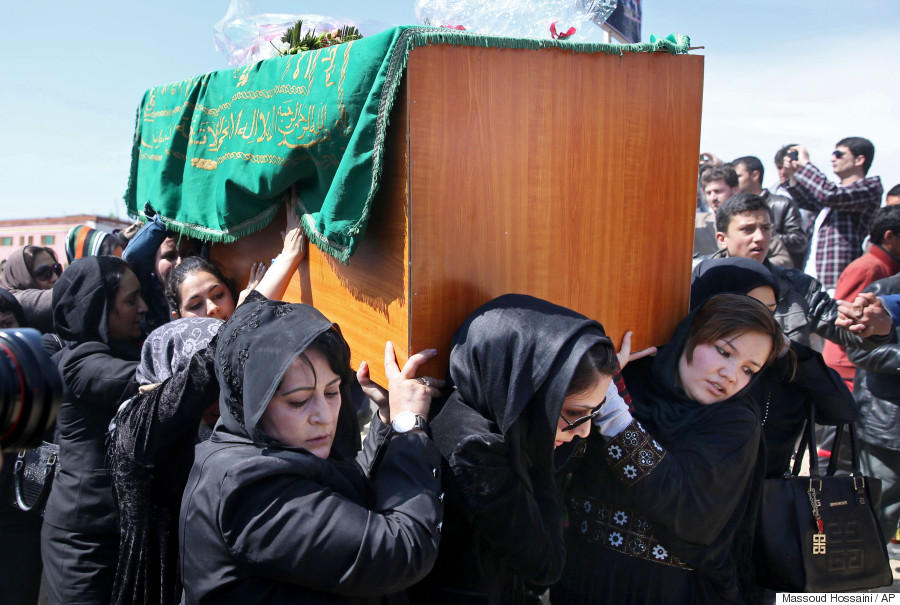 Afghan women rights activists carry the coffin of 27-year-old Farkhunda, an Afghan woman who was beaten to death by a mob, during her funeral, in Kabul, Afghanistan, Sunday, March 22, 2015.

Sayed Habid Shah said that Farkhunda and a fortune teller at the small shrine next to the mosque began arguing, when the fortune teller accused her of burning the Quran.

"She said I am a Muslim and Muslims do not burn the Quran," Shah told The Associated Press. "As more people gathered, the police were trying to push them away, but it got out of control.

"The people pulled her into a corner of the yard and beat her with sticks, and one man took a large stone and dropped it on her. That was the end," Shah said.

Farkhunda's body was then dragged 300 meters (980 feet) along the road in front of the mosque and thrown into the river, he said. 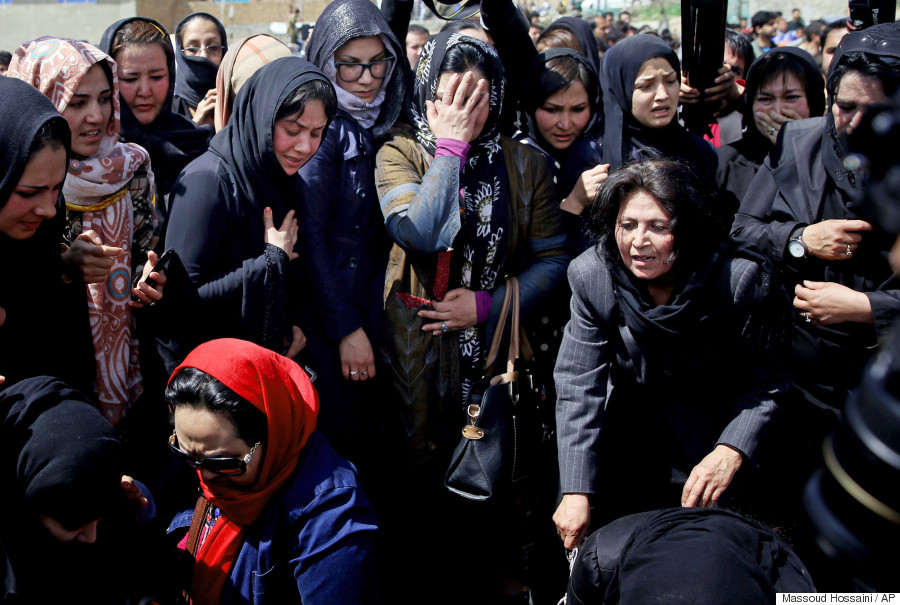 Civil society activists mourn during the funeral of 27-year-old Farkhunda, an Afghan woman who was beaten to death by a mob, in Kabul, Afghanistan, Sunday, March 22, 2015.

Social activists on Monday planted a pine tree on the riverbank spot where Farkhunda's body was set alight.

The demonstrators, many of them members of the Solidarity Party of Afghanistan, blocked the road outside the mosque and marched along the riverside route, starting from where the attack began.

Many women in the crowd wore masks of Farkhunda's battered and bloodied face, which has appeared widely on social media. They carried a banner accusing the government of broking promises to end corruption and bring rule of law to Afghanistan.

Palwasha, who described herself as a social activist, said: "We demand that the government ensure that all those involved are arrested and that they face an open trial so that justice is implemented and they become an example for others." 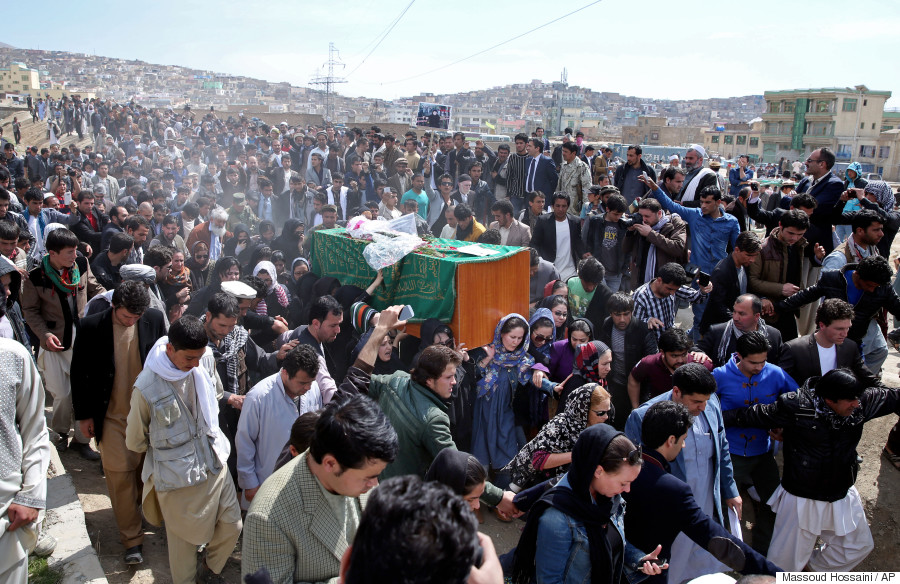 Afghan women rights activists carry the coffin of 27-year-old Farkhunda, an Afghan woman who was beaten to death by a mob, during her funeral, in Kabul, Afghanistan, Sunday, March 22, 2015.

Afghan President Ashraf Ghani, who took office in September voicing support for women's rights, is currently in Washington on his first state visit to the United States. Before his departure, he called the killing of Farkhunda a "heinous attack," and ordered an investigation.

Ghani's wife, Rula, who has spoken up on women's rights, has yet to make a public statement — disappointing some rights activists including film director Sahraa Karimi. "This is typical of the women in positions of influence in Afghanistan —talking talking no action. How can they be our representatives," Karimi said

More demonstrations are planned throughout the week to maintain pressure on the authorities to ensure that women's constitutional rights to equality and protection from violence are respected at every level of society, activists said. 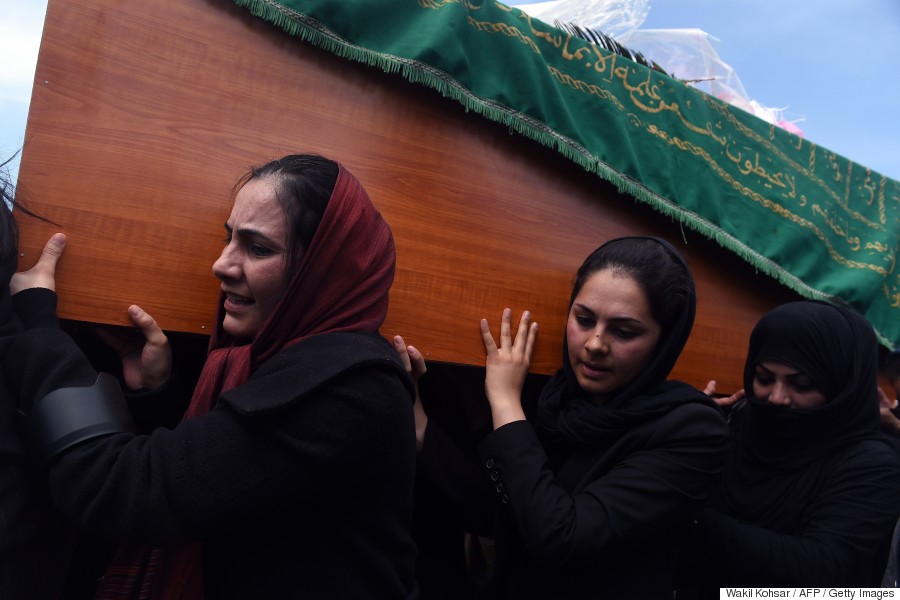 Independent Afghan civil society activist women carry the coffin of Farkhunda, 27, who was lynched by an angry mob in central Kabul on March 22, 2015.