Afghanistan is not the first place you think of when someone says "street art scene," and Kabul would certainly be sort of low on your list of urban art festivals to check out. But, surprisingly, it has both. These are a couple of the revelations we had earlier this month when BSA welcomed three 20-something artists to tour the streets of Brooklyn and meet one of our own homegrown street art duos in their studio.

Abul Qasem Foushanji, Ommolbanin Samshia Hassani and Sayed Mohebullah Ramin Naqshbandi were all good sports despite the brutishly cold February day. In fact, Sayed had a fairly light jacket on because he said it gets as cold or colder back home in Mazar-i Sharif where he is a painter and student who has tried his hand at stencil work. 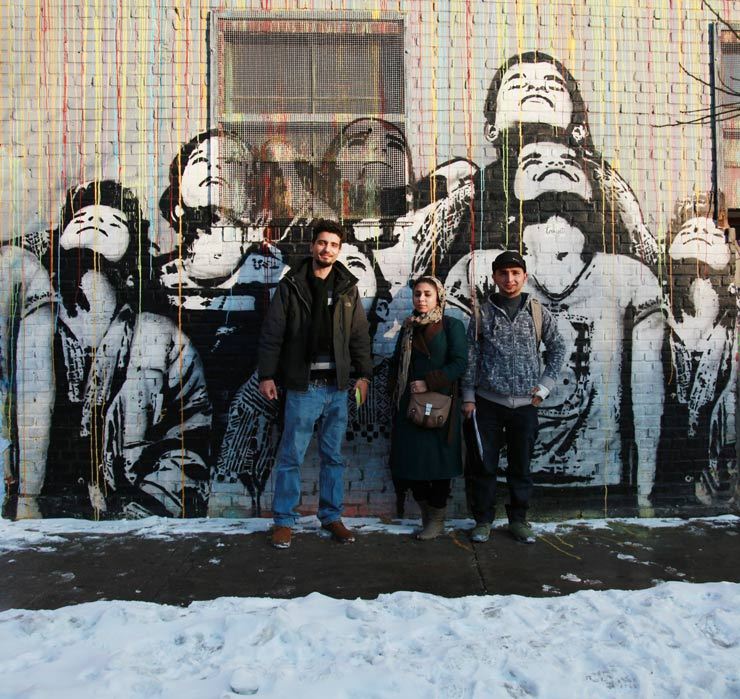 From left to right Qasem, Shamsia and Sayed in front of an Icy & Sot mural in Brooklyn. (photo © Jaime Rojo)

Qasem and Samshia both grew up in Iran, so it made sense that they were excited when we began the tour by checking out the large mural done by Iranian émigrés and brothers Icy & Sot, who now live in Brooklyn. While Arthur, our astutely amiable co-host from the State Department, helped keep the mini-van warm and free of parking tickets, their escort/interpreter Mr. Aziz walked up and over the snowbanks with us while we checked out works by a number of graffiti and Street Artists all around the North Brooklyn neighborhoods of Williamsburg and Greenpoint. 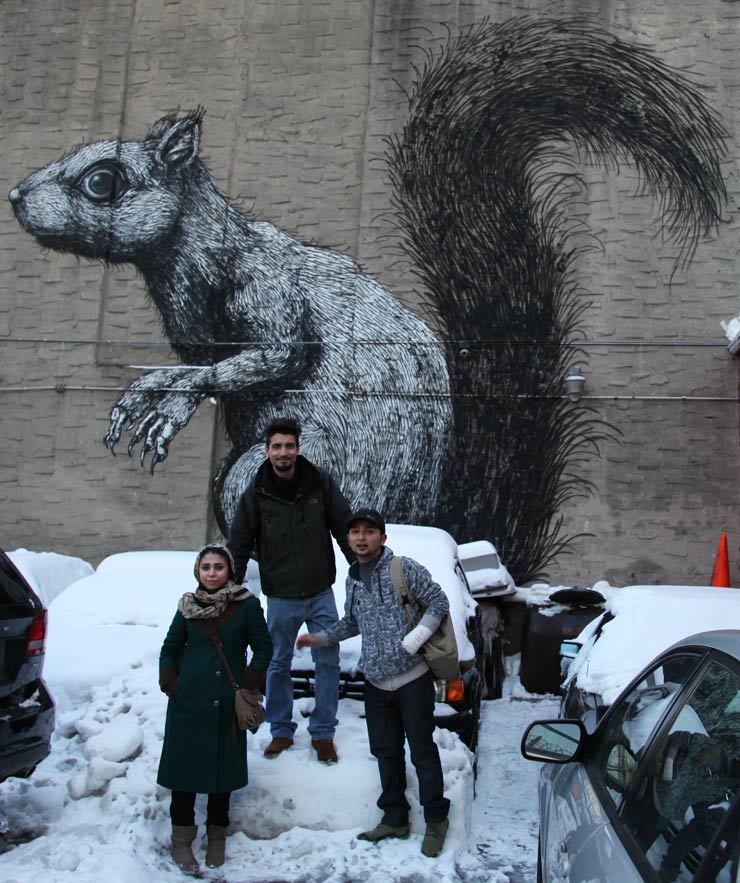 The Central Asian country of Afghanistan has historically eschewed modern art as being unacceptable and many artworks were destroyed by the Taliban in the last few decades for being un-Islamic.

With such a restrictive atmosphere it was good to learn that Qasem plays bass in a thrash metal band, does sound installations and has experimented with abstract expressionism -- something that would have been unheard of in the 1990s. "In the early 2000s when the Taliban left the country, there was nothing," he says as he observes a gradual building of hope in the creative community. 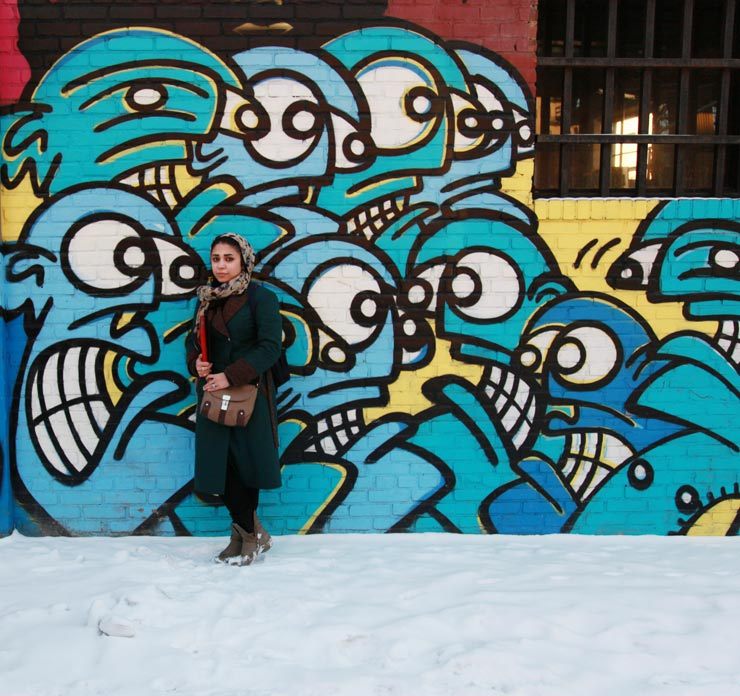 As the sun went down we were welcomed into the vast office and studio of Patrick Miller and Patrick McNeal, who together comprise the Brooklyn based Street Art collective better known as Faile. Having just walked the same streets where the Patricks began many of their experiments at the turn of the century, it was a great opportunity for the guests to see what a world-class art making studio looks like, to ask questions, and to share some stories about how the scenes on streets of Brooklyn and Kabul differ. 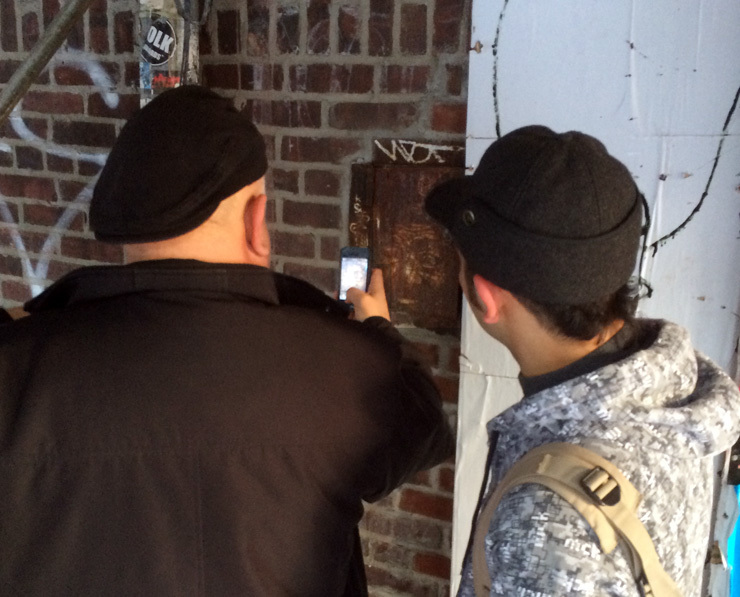 Speaking about their early days of illicit art posting, McNeal explains "You'd go out and you get to the wall and it's quick," he says with a snap of the fingers. "You're not taking the time, necessarily, to think. And then you finish it up and get away from it and you came back to see it the next day. There was something loose in it, where now everything gets very tight and refined," he says as he gestures to the large artworks in progress across the tables and the floor of the studio. 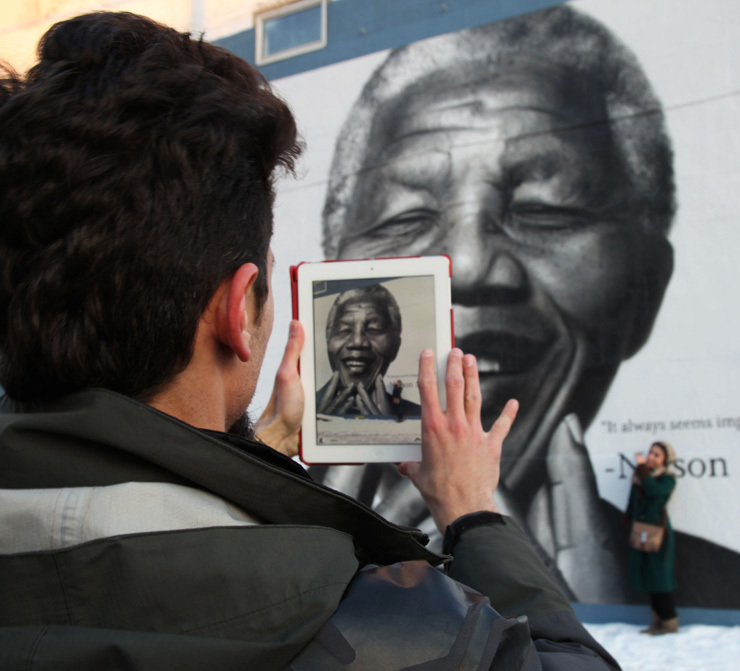 "Yeah, it's changed a lot over time," says Miller about the street art scene, especially in the area of Williamsburg that has become a high-rent playground for professionals and well-heeled college kids. "Real estate, gentrification, a lot of those things have played into it in a lot of places like here and Barcelona where you used to see a lot more things on the street, it doesn't really exist." 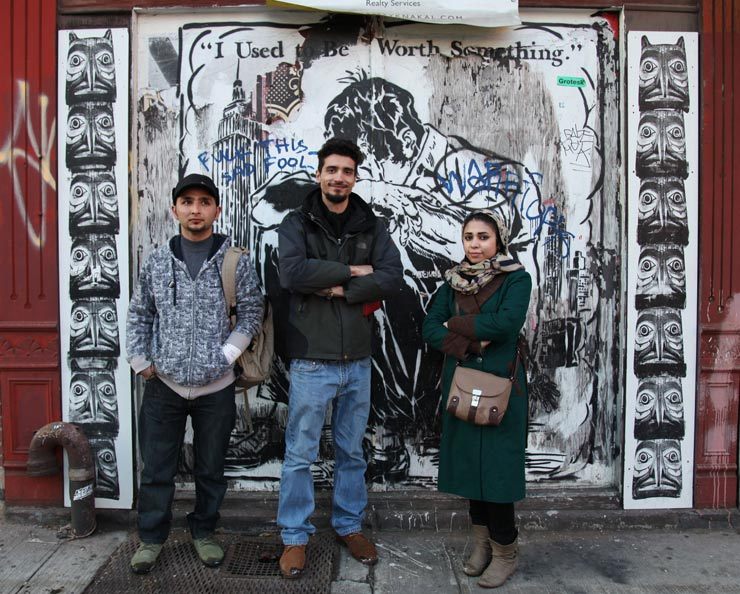 Sayed, Qasem and Shamsia in front of a Faile wheatpaste in Brooklyn. (photo © Jaime Rojo)

One thing we learned is that Shamsia doesn't even usually feel that she can go on the streets in Kabul to create her work because she fears berating words, insults and possibly worse from people who don't think a woman should be doing such a thing. And would never go out after dark. "It's for the boys to go out at night. I wish to do so also but I am a girl. It is dangerous," she says with regret, but is determined to use her art to advocate for the rights of girls and women in whatever way that she can.

One project she calls "Graffiti Dreams" is comprised entirely in her imagination and on her computer - where she creates virtual street art scenes on buildings she has photographed as a way to at least paint walls in her mind. "That's nothing, but for me it is everything because I can do graffiti somehow." She took out her iPad to show McNeal some of her renderings. 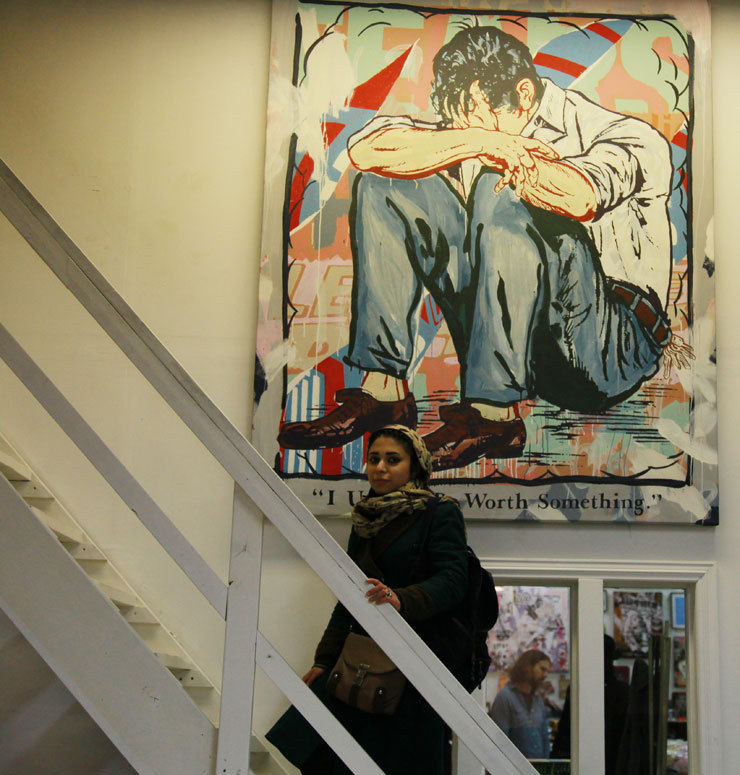 Shamsia poses in front of the same Faile piece she just saw in the street, but this time it's at Faile's studio. (photo © Jaime Rojo)

After British graffiti artist Chu held a one-week graffiti workshop for nine artists in Kabul in 2010 where the concept of graffiti and street art was introduced from a Western perspective, Shamsia and other young artists took the art form to heart.

She has traveled internationally in the last few years meeting other artists and sometimes collaborating with them like Tika from Zürich, Berlin's Klub 7, and the well known Los Angelelino Street Artist El Mac, with whom she did two collaborations now on display in Ho Chi Minh City, Vietnam and in Brisbane, Australia. 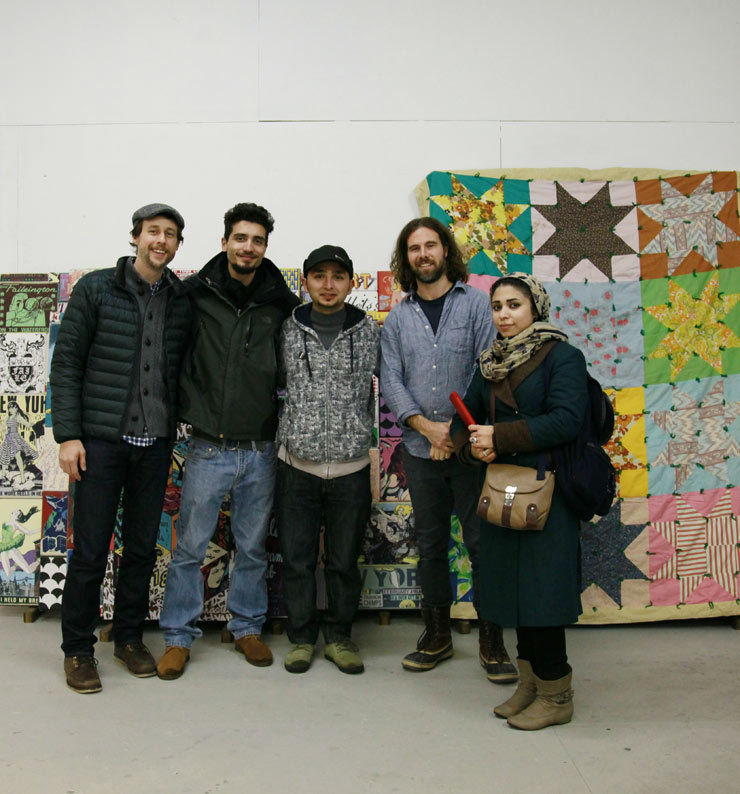 The Afghani artists pose with Patrick Miller and Patrick McNeil of Faile at their studio. (photo © Jaime Rojo)

McNeal asked Samshia, "How did you get exposed to graffiti?," and Samshia talked about the workshop with Chu and how it affected her.

"I thought if I did graffiti then I could introduce art to the people," she says, "Because no one goes to exhibitions and galleries -- only some very important people are invited to exhibits. And I thought that I could put art in the street for all people and maybe they have never seen that there is this art." 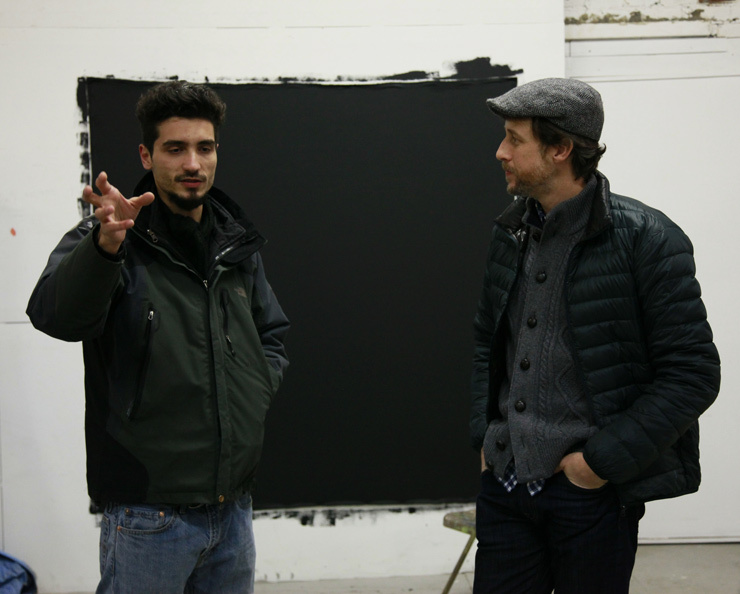 "How do you get spray paint there?" he followed up.

"There are very bad quality spray paint there," she replies with a smile. "These are just for color to put somewhere. It's not really for painting. The color drops a lot, and I'm not changing the size of the caps. Sometimes I do the small details with small brushes because the spray can is not able to do very thin lines."

"That's cool though," McNeal remarks, " because that will inform your style and the way that you work." 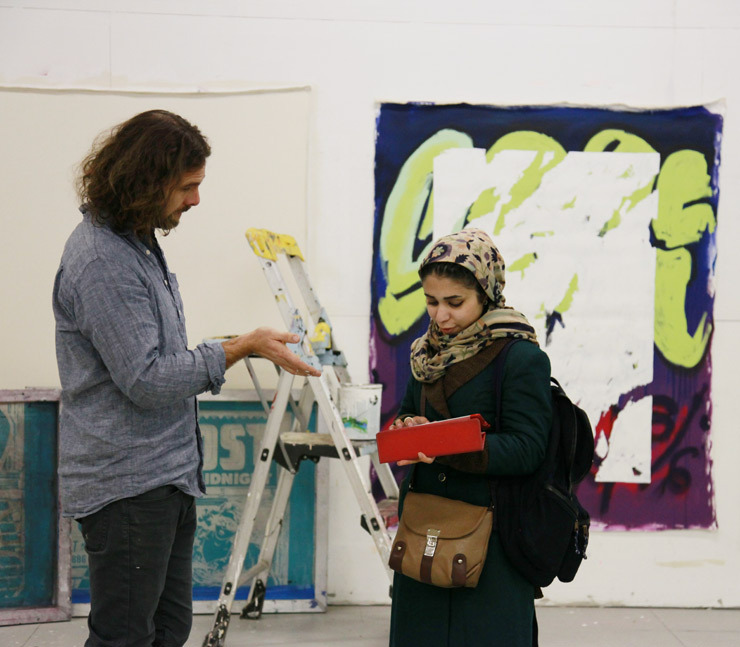 As one of the first graffiti artists in Kabul, Shamsia is also unusual because most practicing artists of any discipline are men - and women face resistance to their participation in many roles, including as an artist on the street. Now an associate professor at Kabul University where she leads workshops to teach students how to use aerosol spray to create art, Ms. Hassani created a festival this December to highlight graffiti and Street Art as an art practice.

Her own work features stylized women in blue burqas, fish, and calligraphy that references poetry. As often happens, the definition of graffiti and street art are slightly different in Afghanistan than they would be in western cities like London and New York, often closer to what might be called murals or community walls. 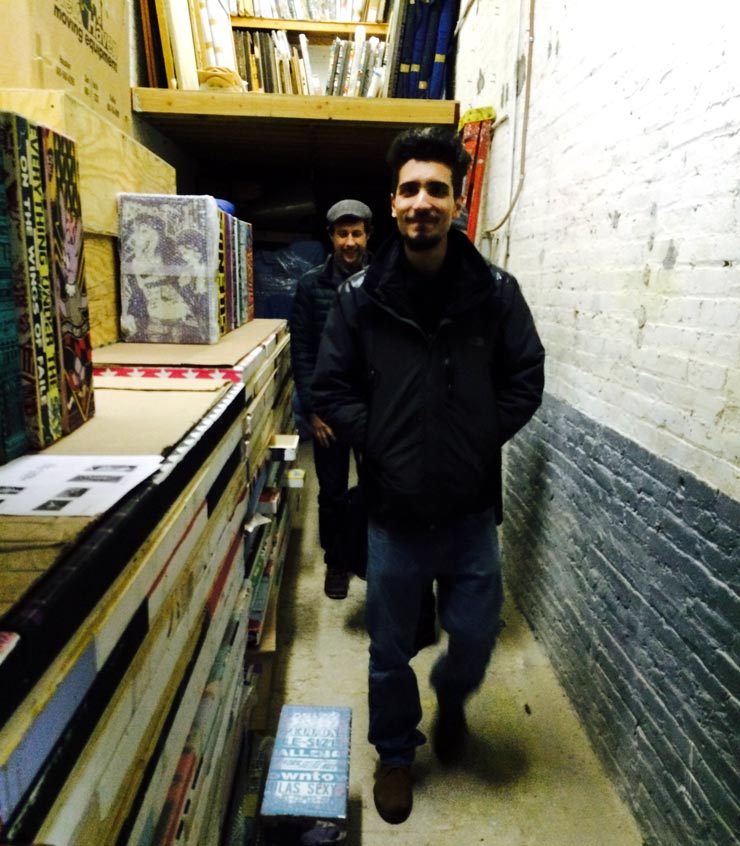 For now she is planning a new program when she returns to Kabul University in the spring.

"Another graffiti workshop is coming too for some children who have no parents. They are often very small girls and they have no parents and I want to help them and have a workshop for them," she explains about her desire to provide restorative healing through art in a city torn by war. "I will start to teach a new subject, making characters, because there is nothing like that right now. I would like to add characters, because everyone likes characters. I would like to teach some technical steps, some secrets of how to make them." 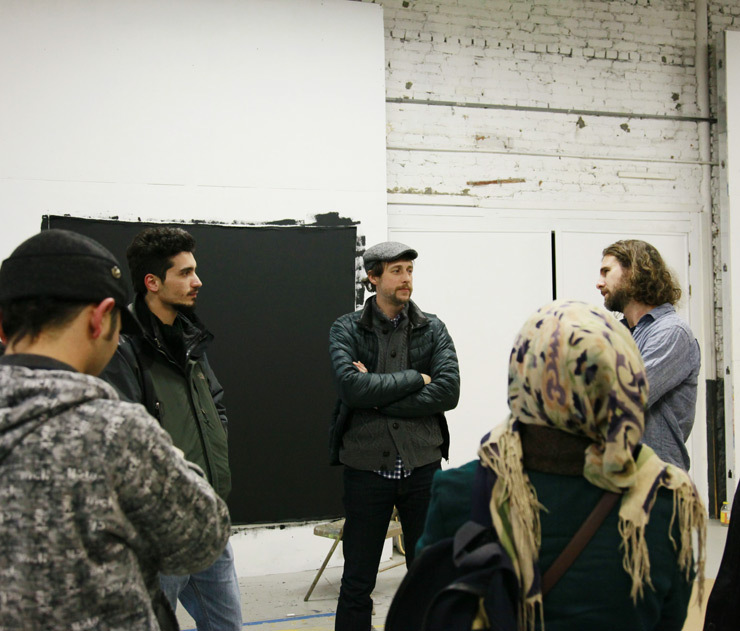 The night ends with tea, cookies, and conversation in a warm living room and the artists talk about some of their projects, internet service, social media, and other ways that society is evolving and what they hope for art in Afghanistan. As he describes his work future projects Sayed says would like to create politically themed messages for the street. Qasem talks about a culture-jamming project creating a false college course advertisement that may also be humorous. Then in a flash, the visit is over, numbers and emails are exchanged and they get ready to go back out in the cold.

In 2012 Shamsia collaborated with Los Angeles based Street Artist El Mac on two murals in Sai Gon, Vietnam. The first mural was painted in September of 2012 in front of Sàn Art, an artist non-profit contemporary art organization in Sai Gon. The second mural, also painted in Sai Gon was unveiled in Brisbane, Australia at the Asia Pacific Triennial in December 2012. 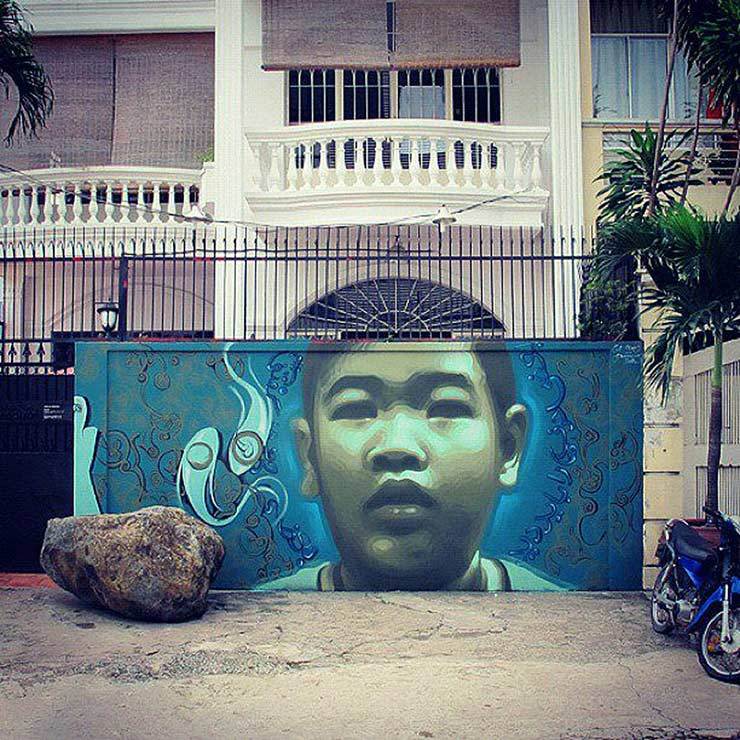 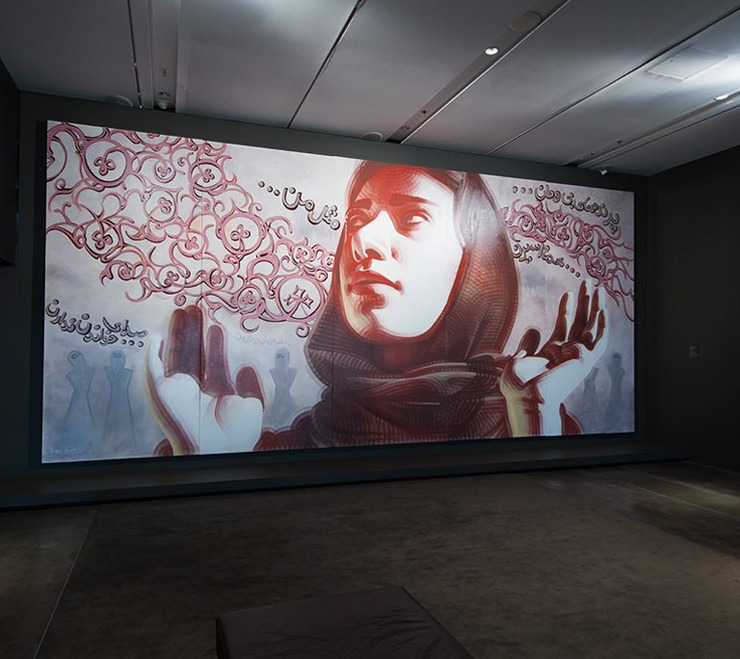 The figure in the center is a portrait of Shamsia by El Mac from photographs that he took of her. The writing that surrounds the portrait is a poem by Ms. Hassani which she integrated with her own designs.