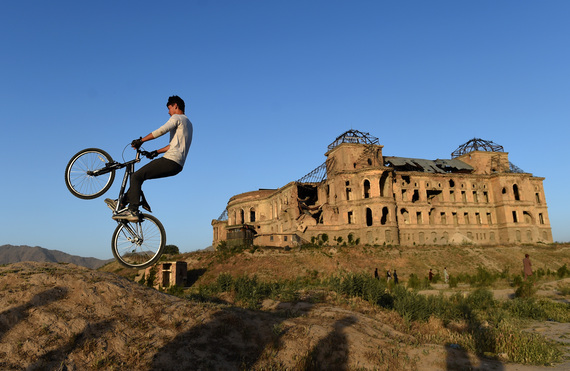 This story is part of GroundTruth's Special Report Foreverstan: Afghanistan and the Road to Ending America's Longest War

KABUL, Afghanistan — It was an inspiring picture: the leader of an embattled but resurgent Afghanistan delivering a rousing report to representatives of more than 60 countries at a one-day Senior Officials Meeting.

“Our Government of National Unity (will) demonstrate to the world community that we have become one team, with a shared vision for repairing our battered country and bringing about a better world for our children,” said President Ashraf Ghani. “This is a country of patriots, we have defended this country for five thousand years and let me assure you we will defend and honor our independence for the next five thousand years.”

But just as the president was waxing eloquent on his country’s gains in human rights, the economy, and domestic security, 13 men were pulled off public transport in the normally peaceful province of Balkh, and summarily executed.

It was another reminder that after 14 years of US military involvement with over a trillion dollars spent, uncounted thousands of deaths and numerous claims of victory, Afghanistan remains a deeply troubled country.

This hardly comes as a surprise to a world grown weary of bad news from the Graveyard of Empires. More startling are the faint, but perceptible, signs of hope and renewal that just may save the country in spite of itself.

Osama bin Laden and Mullah Omar are dead, but their absence has had little real impact on the situation. Afghanistan today is plagued by a paralyzed government, an economy in the toilet and a war that just won’t end.

The National Unity Government (NUG), cobbled together with the help of US Secretary of State John Kerry last September in the wake of yet another badly tainted election, is not working.

President Ghani is supposed to be sharing power with his chief rival in the elections, Dr. Abdullah Abdullah, through the newly created position of CEO. But instead of “co-presidents,” the system has created a two-headed monster, each pulling in a different direction. The result: stasis.

Ghani has so far shown few signs of honoring the NUG agreement he signed. It called for a Loya Jirga, or assembly of elders, to look at changing the Constitution to normalize Abdullah’s position within two years, perhaps moving towards a parliamentary system with a prime minister.

But a deputy minister told GroundTruth last January that there would be no Loya Jirga, no change in the Constitution, and no real power-sharing with Abdullah.

“The president created the CEO position, he can abolish it with a stroke of the pen,” said the official.

Abdullah’s camp, on the other hand, sees things quite differently. One close advisor recently told GroundTruth that Abdullah was first in line of succession, a direct violation of the Constitution, which mandates that the first vice president would take office should the president be unable to perform his duties.

“This whole government is outside the Constitution,” shrugged the executive, speaking on condition of anonymity. “We certainly do not want anything to happen to the president, but if it should, then Abdullah would obviously succeed him.”

John Kerry may be racking up frequent flyer miles to Kabul.

On the war front, things are similarly grim. The Taliban are making a slow but steady comeback all over the country. In the South, Helmand’s districts are falling one by one, while even the relatively placid North is seeing a marked increase in violence, as witnessed by the killings in Balkh.

So far, the center is holding, but only with the help of US airpower. Despite the official announcement that the combat mission isn Afghanistan is over, Washington has more than doubled airstrikes over the past few months.

The Afghan government is doing its best to distract the nation from the dire state of affairs. The colorful first vice president, ex-jihadi commander Abdul Rashid Dostum, was recently dispatched to the northern province of Faryab vowing not to come back until he had finished the Taliban.

He went, he saw, he conquered, the Afghan people were meant to understand: In under a month Dostum was back, giving press conferences atop tanks and reaping plaudits from a grateful nation.

Reports that Dostum’s militias went on a rampage of looting, rape and other violence were ignored or swept under the rug. The news that within a day of his departure from Faryab, the Taliban were back and killing his men with a vengeance, also did little to dim his luster.

The Afghan economy, meanwhile, is nearing absolute zero. Government employees have not been paid in three months, according to one official who works in the Arg, or presidential palace.

Ghani, the brilliant Ivy League technocrat, is doing his best to save the situation. Last weekend he hosted two high-level international conferences designed to drum up economic support for Afghanistan. Right before the Senior Officials Meeting came the RECCA-VI, the sixth meeting of the Regional Economic Cooperation Conference on Afghanistan. Despite the upbeat assessments coming out of these gatherings, few expect that these last-ditch efforts will succeed where so many others have failed.

Security in the capital is precarious. Attacks are on the rise, and several kidnappings within the past few months have foreigners on edge.

Choppers circle overhead almost constantly. Much of the diplomatic corps, including staff of the US Embassy, are almost totally prohibited from using the roads, and have to be ferried to and from the airport — just a few miles away — by helicopter.

Despite the president’s recently declared “jihad against corruption” the problem is worse than ever, say government insiders. With the pot of money shrinking as the international community withdraws, those with their hands still near the trough are grabbing as much and as fast as they can.

The loss of faith among much of the population is glaringly obvious. Passport applications have increased exponentially and those who are unable to get visas take the long route through Iran, walking across the border into Turkey, and from there paying smugglers to get them to Europe.

So what’s the good news?

It would be impossible to argue that things have not improved since the US-led invasion of 2001.

Roads like Highway One, which encircles the heart of the country and is also known as the Ring Road, are now paved, making travel and trade much more accessible.

“It used to take me three days to get from Kabul to Herat,” said Saeed, a driver with a local car company. “Now I can leave in the morning and be there for dinner.”

But insurgent attacks are making even this achievement a bit hollow.

“Highway 1 … is supposed to be an example of the success of the 12-year effort by multinational forces to end Taliban control and showcase the ability of the Afghans to handle their own security,” wrote USA Today in 2013. “But insurgent attacks are regular occurrences, and there is a question whether it can ever be ready for a withdrawal of U.S. troops ordered by President Obama to be completed by the end of 2014.”

Millions of children who were unable to study during the decades of war and the Taliban are now in school. Girls are getting an education, and taking their place in government and business. Even if progress has been slow and uneven, there are opportunities for women where before there were none.

At the prestigious American University of Afghanistan, 50 percent of the recent incoming class were women.

Much of the country now has electricity, even if power outages due to “load shedding” are frequent.

Perhaps more than any one thing, the Internet and social media have changed the face of Afghanistan. While Internet penetration is still just at 12 percent, it is rising rapidly.

An entire generation has grown connected to the world in a way that their parents and grandparents could only dream of.

Facebook and Twitter function as platform for serious discussion, sometimes acrimonious, but always interesting. The prevalence of smartphones has made the government accountable in a way it had never been before.

The case of Farkhunda, a young woman beaten to death by a mob after a false accusation that she has burned the Quran, shows just how powerful the social media world is.

Within minutes of her death, dozens of cell phone videos of the killing were on YouTube. Facebook exploded with condemnation, while some of the perpetrators were eager to boast of their role in the tragedy.

The videos and some of the Facebook posts were used in the trials against the 49 men who were ultimately arrested. Many were acquitted, but 11 men will spend many years behind bars.

Satire, sometimes biting, is also gaining traction on the Internet. Afghanistan now has its own version of The Onion, the irreverent US publication. One recent post suggested that John Kerry would soon arrive to broker a deal in the Taliban leadership crisis that followed the announcement of Mullah Omar’s death.

Another group has a Facebook page called “Kabul Taxi,” which delights in needling the government. Recently the security services tried to take action against it, but the outcry on social media was deafening.

Much of this is being driven by the small but energetic group of young Afghans who have grown up in this new world. Many have been educated abroad, and have chosen to come home and fight for their country’s future.

Some are in government, others in business, education, media. But everywhere they are making a difference — maybe small, maybe insignificant so far, but still perceptible.

Will they transform the nation? Or, weighed down by Afghanistan’s tragic, troubled history, will they turn into their fathers and grandfathers?

It may be too soon to tell, but it is not too late to hope.