Marking a significant shift in public opinion after more than 12 years of war, Americans are as likely to say sending troops to Afghanistan was a mistake as they are to say it was not, a Gallup survey found Wednesday.

Public opinion is split -- 49 percent think the United States made a mistake in sending troops to Afghanistan in 2001, while 48 percent do not. When the question was first asked in November 2001, 9 percent thought it was a mistake, while 89 percent did not. 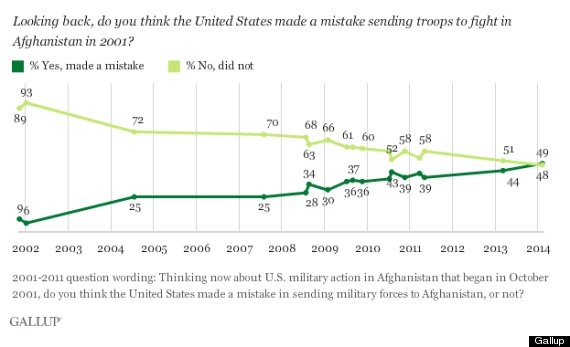 The poll is yet another sign of weariness over what has become the longest war for American troops in U.S. history. As Gallup points out, "the more than 12-year span during which less than half of Americans thought the U.S. made a mistake in entering Afghanistan has been remarkably long, relative to past U.S. interventions." In contrast, Americans turned against the Korean, Vietnam and Iraq wars far more quickly.

A CNN/ORC International poll in December found that just 17 percent of Americans support the war in Afghanistan, and 57 percent think the war was going badly.

U.S. troops are scheduled to be in Afghanistan until Dec. 31, 2014. The United States has been pressuring Afghanistan President Hamid Karzai to sign a bilateral security agreement to allow troops beyond that date, but Karzai has repeatedly refused. The Wall Street Journal reported that the U.S. military has revised withdrawal plans to allow the White House to wait until Karzai leaves office -- likely not before August -- to give time for his successor to sign the pact.

1 / 8
Start of War: Oct. 7, 2001
<em>American soldiers hide behind a barricade during an explosion, prior to fighting with Taliban forces November 26, 2001 at the fortress near Mazar-e-Sharif, northern Afghanistan. (Photo by Oleg Nikishin/Getty Images)</em>
Getty