Support for the Afghanistan war is up since late 2013. Obama gets a holiday bump. And while the economy is seen as improving, financial difficulties continue for money. This is HuffPollster for Monday, January 5, 2015.

SUPPORT REBOUNDS FOR AFGHANISTAN WAR - Scott Clement: "After falling to record lows, support for the Afghanistan war has risen since 2013, according to a Washington Post-ABC News poll that also finds majority support for a plan to keep thousands of troops in the country in the coming year. Overall, Americans remain downbeat over the war at the end of NATO’s 13-year combat mission. A 56 percent majority says it has not been worth fighting, continuing a negative streak that dates to 2010 in Post-ABC polls. But 38 percent in the new survey say the war was worth the costs, up eight points from December 2013 and 10 points from a record low that July (28 percent). The bounce-back in positive views is driven by a dramatic reversal of opinion among Republicans. Only 39 percent of Republicans said the war was worth fighting in late 2013, but 56 percent believe so today, marking an end to a massive downward slide since 2009. In the early months of Barack Obama’s presidency, as many as 77 percent of Republicans said the war was worth fighting." [WashPost] 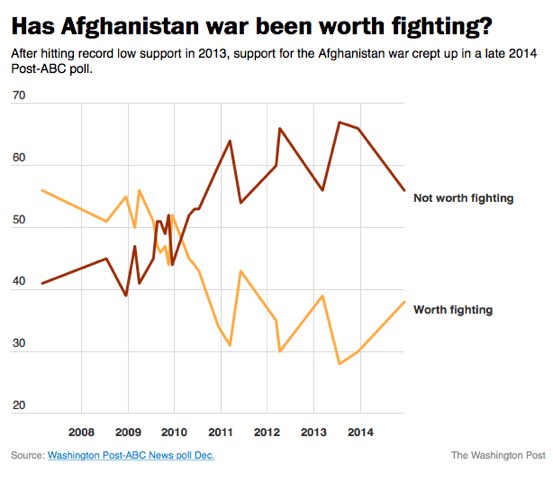 GALLUP: OBAMA APPROVAL HITS 48 PERCENT - Frank Newport: "President Barack Obama's job approval rating is at 48% for Dec. 27--29, the highest three-day average since Aug. 21--23, 2013." It fell back to 46 percent for the most recent tabulation, covering December 30 through January 2. More from Newport: "Obama's disapproval rating is also 48%, and this marks the first time his approval-disapproval gap has not been negative since September of 2013. Obama's job approval rating has been trending up in general in recent weeks, averaging 45% for the week ending Dec. 21 and 44% for the week ending Dec. 28. These are all above his overall average for 2014 so far of 42%. Some of this uptick is due to higher ratings among Hispanics, who reacted favorably to Obama's actions on immigration announced in November. Some of it may reflect his recent announcement concerning the restoration of relations with Cuba. Some may reflect Americans' increasingly positive views of the economy and jobs picture. And some may be a "Christmas" bump, reflecting Americans' more charitable attitudes in and around the Christmas season." [Gallup, Gallup Daily results] 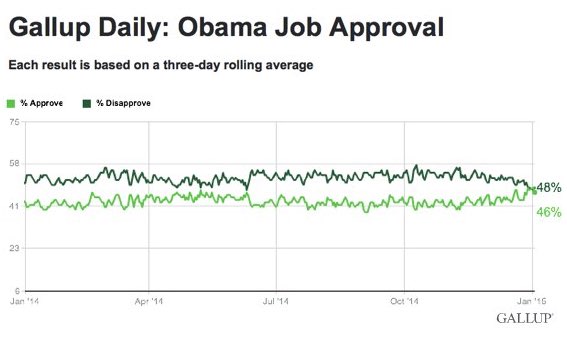 YouGov finds improved ratings of Obama, economy - Kathy Frankovic: "Maybe it’s just the holiday spirit, but President Barack Obama is ending 2014 on a high note – his 46% approval rating is the highest he’s seen in Economist/YouGov Polls all year. 46% isn’t a great score. And more than half the public continues to disapprove of the way the President is handling his job. But last week’s improvements in the economy have returned President Obama to one of his highest approval ratings all year. And for the last five weeks, his approval rating has averaged 44%. It dropped below 40% twice in November, just before the midterm elections, and shortly afterwards." [YouGov] 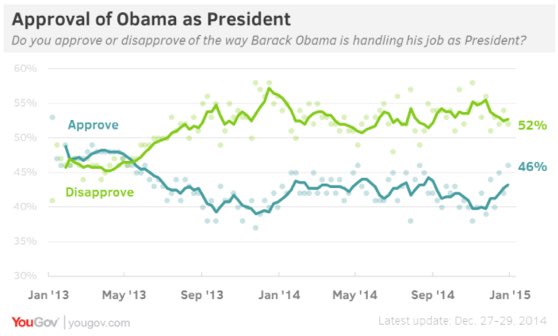 2014 A MIXED BAG FOR LOWER INCOME AMERICANS - HuffPollster: "Americans are seeing new signs of economic optimism, but their views of their own finances remain comparatively bleak. Views of the economy are at a post-recession high, and more people are finding jobs, but new HuffPost/YouGov polling shows that most have yet to see positive change personally -- and that for many Americans, especially those in working-class households, money continues to be a significant source of stress. Just 18 percent of Americans say they're better off financially than they were a year ago, with 29 percent say they're worse off, and the majority -- 51 percent -- that they're around the same. Looking ahead, just 26 percent think they'll be better off in another year, while 18 percent expect things to be worse, and 47 percent expect things will remain the same….For many Americans making lower wages, the status quo remains difficult. Just 14 percent of Americans in households making $40,000 a year or less said they were making enough money to live comfortably, while 47 percent said they were just getting by, and 31 percent that they weren't getting by at all. ...Three quarters of lower-income Americans said they had put off some purchases this year to save money. Nearly a quarter said they'd delayed seeking medical care, while 59 percent said they'd held off on buying new clothes or personal items, and 41 percent hadn't taken a vacation or other time off." [HuffPost]

-A new Post-ABC survey reviews the contrasting perceptions of the criminal justice system by black and white Americans. [WashPost]