Opportunities often present themselves when we're not expecting them, yet they change our lives. That's what happened to me right after 9/11 when I accepted an invitation to join a bi-partisan State Department initiative, the U.S.-Afghan Women's Council (www.usawc.state.gov or gucchd.georgetown.edu/76315.html). It was the start of a decade-long personal journey to help Afghan women break the relentless cycle of poverty. I was a Goldman Sachs partner when the Twin Towers fell. Now, I'm a social entrepreneur, trading rugs rather than bonds, focused on a triple bottom line -- people, planet and profit. Today, instead of applying my Wharton MBA toolkit to understanding the fundamentals of market change, I apply it to understanding the fundamentals of social change.

My first trip to Kabul in January 2003 jolted me into action. That's when I met dozens of widows and children trying to survive frigid winter weather by squatting in the ruins of a bombed out building. I was confronted with the reality that, but for the accident of birth, this could be me and mine. Afghanistan is one of the world's most tragic and seemingly inhospitable countries, particularly for women. In fact, according to the 2011 Thompson Reuters Foundation survey, it currently ranks as the world's single worst place for women. That's worse than the Congo, worse than Darfur, worse than Sierra Leone.

My personal soapbox has always been women's rights -- particularly women's economic empowerment. My mantra is: she who writes the check controls. It's a universal truth that transcends country and cultures. With that in mind, I came home to Chicago to think of some way to create jobs for rural Afghan women. Initially, I was product agnostic -- these jobs needed to be culturally acceptable, fair labor, and "shovel ready." These families needed food on the table immediately. After a few months of research, I founded a social business enterprise ARZU STUDIO HOPE (www.arzustudiohope.org) to employ highly skilled, but destitute, women weavers and to provide social benefits, including access to education and basic healthcare. Legally, ARZU is incorporated as a non-profit 501(c) 3 in the U.S. and a local NGO in Afghanistan.

The idea was simple -- at least on paper: To establish the preconditions through job creation for these weavers to pull themselves and their families out of extreme poverty thanks to their own hard work, resourcefulness and initiative. As with most plans, execution is the hard part. At the outset I knew nothing about Afghanistan, rug-making or international development practices. (As it turns out, the latter was a net positive since I was also not saddled with the preconceived ideas, failed practices, and general baggage that burden big international development approaches and inhibit forward progress to find workable solutions for many of the world's intractable problems.)

ARZU operates in three villages in Bamyan Province in Central Afghanistan with an objective to empower destitute, illiterate women. While rich in cultural heritage, Bamyan is one of the poorest, most underserved provinces in the country and home to the Hazara people, who have been discriminated against for the centuries because of their minority Shia religious beliefs.

We make two products for export to the U.S. and other developed countries: award-winning hand-knotted rugs and Peace Cord® bracelets (www.peacecord.org), made from military grade parachute cord and buttons. We hire local Afghans for all kinds of jobs -- as weavers, graphers, teachers, supervisors, builders, carpet experts, drivers, cleaners, cooks, monitors, midwives, health workers, gardeners, and more. Women hold 90 percent of the 700 or so jobs we've created.

In a gender-segregated society like Afghanistan, men are typically in control at the provincial, village and household level. Bamyan is the rare exception, thanks to Dr. Habiba Sarabi, the first and only female provincial governor in Afghanistan's 5,000-year history and a true heroine. Governor Sarabi is a medical doctor, politician, reformer and an environmentalist. I met Habiba in 2003 when she was the minister of Women's Affairs and she's one of the key reasons ARZU works in Bamyan. She is a tireless champion of women's rights and a good friend to ARZU. 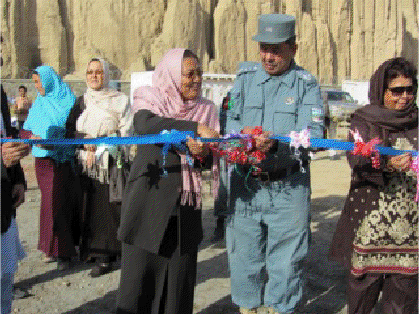 Habiba (left) and her aide touring ARZU's preschool, the first of its kind in Afghanistan.

It's been 11 years since the Taliban obliterated the magical giant Buddhas of Bamyan and rural Afghan women remain one of the most vulnerable classes of people anywhere in the world. Yet, these women teach me on a daily basis about the resilience of the human spirit. Through them, I've learned that people everywhere want the same things for their children -- food on the table, good health, a safe environment, an education, good economic prospects, happiness, a better future than that of their parents, and peace. Optimism is the catalyst for change. That's why we named our organization ARZU. ARZU means "hope" in Dari.