According to experimental psychologist and cognitive scientist Steven Pinker, the least violent and therefor most peaceful time in history is the time we're living in right now. There are parts of the world that might have a hard time with this theory. For example, the people inhabiting the current desert of war-torn Iraq might have reasonable difficulty believing such an idea. Furthermore, the American soldiers still being deployed into the chaos of conflict might feel the need to argue with said Harvard professor of psychology. Clint Eastwood's new movie, American Sniper, certainly makes no attempts to support the concept of peace in our modern world. The question is: What does the movie support?

Based on Chris Kyle's autobiography, the film explores the psychology of a Navy SEAL in the heat of battle as well as in the quiet of his home. This complex portrait of a man praised as an American hero conjures difficult questions about mental illness, cultural ideologies and conditioned philosophies. We all want to believe in heroes and villains. Good and evil. We are obsessed with the idea that there are evil people who want to harm us, and heroes who are fighting to save us. Proof lies in the obvious: Guardians of the Galaxy has grossed over 330 million dollars domestically just this year. The concept of good and evil is a comforting one. It makes sense of an otherwise complicated and confusing world. The myth of comic book superheroes is really just a modern extension of religion. A way to contextualize morality through storytelling.

The problem is there is no such thing as good and evil. Heroes and villains. There are just people and chaos. The most astounding thing about humanity is the infinite aptitude to cause harm to one another. The selfish decisions human beings make every second of every day are extraordinary. The only thing more remarkable is every single act of compassion and courtesy and kindness. We are all part of the same whole. And we are all hypocrites be design. We all have the capacity to be villains and heroes, at any given moment. Is Chris Kyle a hero? Clint Eastwood seems to think so, and he is not alone. Any rational person, despite their personal beliefs, must concede that what the former SEAL has accomplished is not only impressive, but more importantly, fascinating. 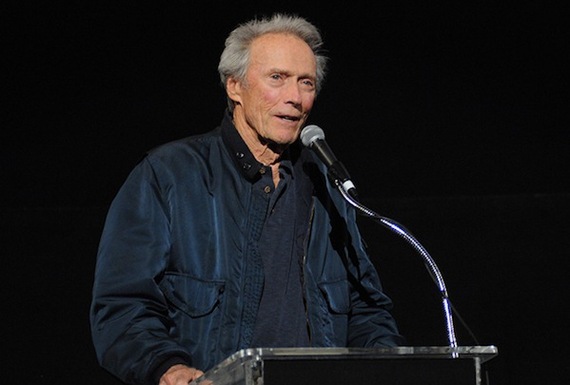 The film succeeds in showing the struggle of a dangerous man trying to live a normal life with his family. War can be an intense addiction and thrilling mistress. The compelling dynamic between Chris (played by Bradley Cooper) and his wife, Taya (played by Sienna Miller), is one of the strongest points at work here. The affect the war has on families, and how it changes their loved ones is something not often explored, especially not this deeply or honestly. Bradley Cooper has transformed himself into Chris Kyle. He plays the part with likable humor and immersive focus. Sienna Miller gives an equally strong performance as the conflicted yet loyal wife of a soldier. Their indestructible relationship lays a strong foundation for the vivid sequences of chaotic destruction.

Chris Kyle has 160 confirmed kills as part of an even bigger 255 probable kills. His farthest kill was 2,100 yards (that's 21 football fields). He served four tours in Iraq, was shot twice and was hit by the debris of six separate IED explosions. He is the most lethal sniper in American military history. He believed in something with enough fortitude and passion to not only risk his own life, but to end the lives of 255 other people. Just hearing that number is enough to turn your stomach. While the sniper is immortalized and celebrated on the silver screen, we are left with nagging, troubling questions. Were these deaths just? Are any deaths just? What is the difference between an American sniper and a serial killer? There is no doubt that Chris Kyle believed with every ounce of his being that what he was doing was good. That he was doing his part to protect his country. That he was making efforts toward vanquishing the evils of the world. But who decides what is good and what is evil? Certainly, the people that were killed did not believe that they were evil. Certainly, they thought they were being heroes for their country, for their way of life, just as every American soldier does.

There has to be a considerable amount of respect for the sacrifices made by those citizens who decide to become soldiers. It is heart wrenching to think of all the fatherless children trying to navigate their way through the world. All the young men who return home, but never seem to come back completely. Those fighting PTSD. Those fighting the high divorce rate among Navy SEAL teams. The lives scarred and beaten and broken for our American freedoms, our American dreams, our America. The simple, straightforward point of view employed by the protagonist is effective in not only justifying his actions, but also sending a shiver down the spine of progress. It is not so simple. In a world where shootings have practically become commonplace, we are left to wonder what we are fighting for. What is the terror? Who are the savages? Who is the enemy? Who is the righteous? Who is right? Is war simply an unavoidable violence implicit in human nature? Or do we merely accept war because we have never known a world without it? To paraphrase Clint Eastwood's succinct introduction of the film, "I think this guy had a good story, and I think we made a good movie. You'll have to judge for yourselves."