Two years ago this week, at the biennial convention of the Alaska AFL-CIO in Anchorage, then-Governor Sarah Palin was whisked off by her husband to Ted Stevens International Airport for a flight to Arizona, where Palin met, first with senior advisers to Republican presidential nominee John McCain, and finally McCain himself, in a haphazard, slipshod vetting process that resulted in her being selected as McCain's running mate.

Palin was a keynote speaker at the Alaska convention in 2008 and a darling of union leadership, as she used the AFL-CIO convention for a photo-op to sign House Bill 3001, which granted an exclusive pipeline license to Canadian-based TransCanada Corp. -- an agreement which promised, at least on paper, a barrelful of union jobs in the Last Frontier.

Two years later, after her failed bid for the vice-presidency and her abandoned governorship, Palin is a darling no more. AFL-CIO president Richard Trumka -- whose speech attacking racism in the 2008 presidential campaign went viral on Youtube -- went after Palin directly today in Anchorage, comparing her to the American right-wing demagogue Joe McCarthy and referencing recent comments Palin had made at the Oil Palace in Tyler, Texas, about union "thugs" and "waving the Jones Act." 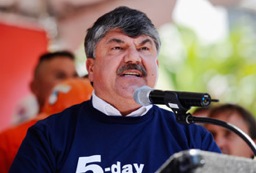 Palin, of course, responded with yet another hyperbolic and self-serving posting to her Facebook page, thus elevating Trumka's comments to several spins in the nightly news cycle.

Here are some of the highlights of Trumka's remarks about Palin:

What is this crazy magnet that's pulling people to the right? I mean, look at your former governor... Who is she, anyway? Sarah Palin?

She used to have a job, your governor... You knew her... Or thought you did... I know I thought I did. She seemed like a decent person, an outdoorswoman. Her husband's a steelworker. She seemed to take some OK stands for working families.

And then things got weird. After she tied herself to John McCain and they lost, she blew off Alaska. I guess she figured she'd trade up... shoot for a national stage. Alaska was too far from the FOX TV spotlight.

I bet most of you, on a clear day, can see her hypocrisy from your house.

Instead, she's hanging out on cable TV, almost a parody of herself, coming out with conspiracy theories about Obama and his "death panels... " Talking about "the real America." Talking about building schools in "our neighboring country of Afghanistan." Writing speech notes to herself on her hands.

Sometimes -- about Sarah Palin -- you just have to laugh... But it's not really funny. In this charged political environment, her kind of talk gets dangerous. "Don't retreat... reload" may seem clever, the kind of bull you hear all the time, but put it in context. She's using crosshairs to illustrate targeted legislators. She's on the wrong side of the line there. She's getting close to calling for violence. And some of her fans take that stuff seriously. We've got legislators in America who have been living with death threats since the health care votes.

And down in Tyler, Texas, she's talking about -- and I quote -- "union thugs." What? Her husband's a union man. Is she calling him a thug? Sarah Palin ought to know what union men and women are.

Oh, she goes to great pains to talk differently about unions and the working people who belong to them, knowing full well we're one and the same.

But using the term "union thug." That's poisonous. There's history behind that rhetoric. That's how bosses and politicians in decades past justified the terrorizing of workers, the murdering of organizers...