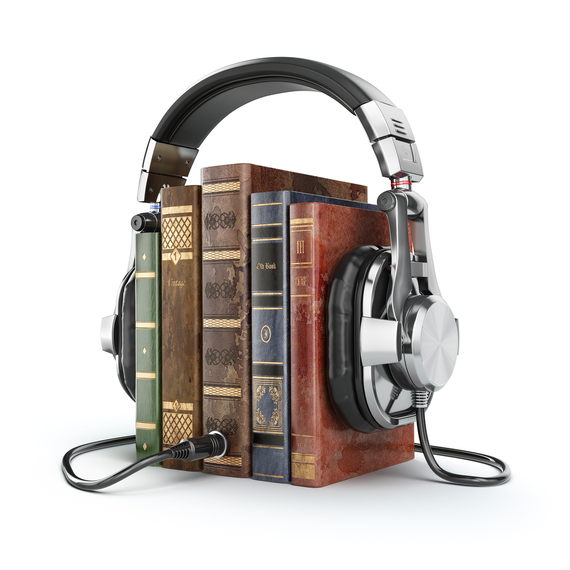 This is for every artist who has ever been afraid to put themselves out there.

Last week, the Audible.com version of my debut novel Oil and Marble came out.

When I got the Audible link, I immediately hit "Play Audio Sample." Narrator PJ Ochlan was reading a Leonardo chapter -- the one where he's hunting for Lisa in the market, but can't find her...

I almost threw up.

I shut it off.

Let me set the record straight: PJ sounded great. His voice is authoritative and rich -- two qualities I wanted in a reader. The words and sentences have a quick rhythm. He clearly did a brilliant job.

But I couldn't listen.

For the last 10 days or so, I've been trying to listen. I need to spread the word about the audiobook; I need to write a blog about it; I need to have some insightful response when interviewers ask me about the Audible version.

And I WANT to listen. Audiobooks are a brilliant way to get lost in stories. Plus, I love hearing other actors read my work -- they bring material to life and make choices that surprise and thrill me.

Plus, directors, producers, and actors will one day make the TV/film version (people are working on it now; talk about overwhelming); I have to get used to other people putting my story out into the world.

WHY CAN'T I LISTEN?

I figured out why I can't listen in acting class, in the middle of a repetition (I'm a Meisner junkie and if you don't know what the words "repetition" or "Meisner" mean, it's okay; it just means you are normal -- aka, not an actor -- so I've provided links).

It's because I'm terrified. Not about how the Audible version sounds -- everyone who has listened so far has said it is great...

But because of what I now KNOW.

I've spent my life writing stories, but hardly anyone has ever read them. My teachers read them. Fellow students in workshops. My husband, mom, best friend. Producers trying to develop my scripts. One time, to prepare for a meeting with me, a guy read a story I'd published in an online journal; that was weird. But that was one guy.

I've spent years producing national television; millions of strangers have watched my work and listened to my words. But it was always other people on the screen. It was never me.

But then, during that acting class, I had this feeling of being completely, helplessly exposed. Of not being able to hide, no matter how I tried.

That's when it hit me:

While writing Oil and Marble, I cut myself open, took out my guts, and put them on a page. I exposed everything swirling around inside of me.

But that's not how my debut novel worked. People read it. Lots of people. Strangers. And they are talking about it -- saying mainly good things (of course, some internet comments say bad things, but what would the internet be without a few haters?) Fans cry to me after readings and quote me to me. Big newspapers and small blogs write about it. I discuss it on TV and radio.

The point is, people are talking about things that used to be swirling around -- in the dark, all alone -- inside my guts.

I'm thrilled people are reading Oil and Marble. That's why I'm a writer. (Right?) Is a writer without a reader a writer -- or just a dreamer? If you entertain only yourself, you may be a writer, but you aren't professional, and it's been my lifelong dream to be a professional writer. This is where I want to be.

I've always been a quiet, private person. I would rather play inside my head than out in the world. I want to sit in a cave and hang out with Michelangelo, Leonardo and my other characters.

I sound insane. I actively sought editors and publishers -- I FOUGHT to have Oil and Marble published and read. I wanted it out there.

But now, not only are strangers reading my words but a stranger has put his voice to my words for the Audible version -- he drank in my story and characters and made them his own. Michelangelo and Leonardo are his now, just like they belong to each reader, too.

It's no longer just the three of us, alone in my cave. The world has entered my playground. And I invited it in.

I am choosing to do it again.

I am cutting myself open and pouring my insides onto new pages. And with these characters and this story, I'm exposing even more about art, creativity, fear, hope, struggle...

But this time around I have no illusions. What I am doing is not a private act. Strangers will read it and talk about it and put themselves into it. Other actors will read this story for new audio books. This novel is no different than the last -- only this time, I know what's coming.

But even though it's terrifying, I'm a writer, so what else would I do? I must keep writing; I don't exist without it.

So if you can't reach me in the coming days, know that I am locked away, tricking myself into believing that it's just us again -- me and my characters -- down in a cave, with no one looking in.