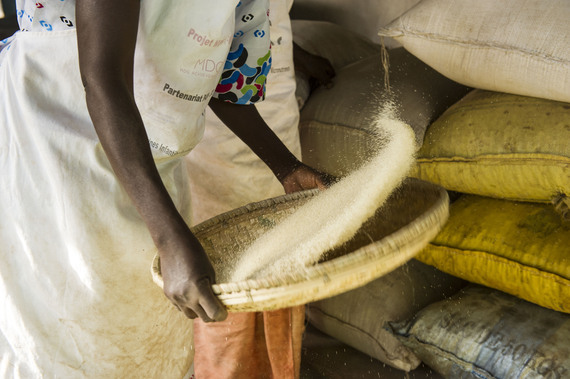 African cuisines are striving to achieve the visibility and popularity among consumers in the Global North that other culinary traditions from the Global South have been enjoying. On the occasion of a public event at the New School, I had the opportunity of discussing the landscape of African cuisines in the US and their trajectory in the cosmopolitan world of fine dining with Senegalese chef, entrepreneur and author Pierre Thiam.

His personal history, from a student of chemistry and physics to a successful restaurateur and ambassador for African cuisines, is tightly interwoven with the historical developments of the post-colonial transition and the social changes brought about by dynamics of globalization.
Thiam does not embrace the romantic idea of original, untouched cuisines in Africa, pointing out how the continent has been connected with other civilizations for centuries. We can mention the inclusion of North Africa in the Roman empire, the expansion of Muslim civilizations into Sub-Saharan Africa, the close trade and cultural connections between East Africa and South Asia through the Indian Ocean commercial routes, the Atlantic slave trade and, more recently, the expansion of European Colonial empires. Thiam's Dakar is a cosmopolitan city that negotiates its colonial heritage, for good and bad, with its desire for modernity and relevance. French-style baguettes, embraced in the past as a symbol of refinement, are often preferred to local grains such as fonio, pointing to the effects of what chef Thiam defined as "colonial brainwashing" -- the implicit acceptance that everything coming from the white occupiers was intrinsically superior to one's native customs. The devastating psychological consequences of this tension, both at the individual and at the communal level, were reflected also on the food system. The French imported what was called "broken rice" from the territories they controlled in Indochina to replace the traditional varieties of rice that Africans had domesticated centuries before, in order to allow local farmers to concentrate on peanuts, which originated in the Americas and had become economically valuable once oil extraction technologies were perfected. Nevertheless, the "broken rice" was absorbed into Senegalese cuisines to create new delicious dishes. At the same time, Vietnamese nems became integral part of menus for local celebrations. The contemporary vibrancy of Senegalese cuisine and other cuisines from Africa is the result of resilience honed through hybridization, power negotiations, and cultural violence.

Nostalgia for the familiar flavors from home played an important role in determining Thiam's professional growth. His first interest in cuisine was stimulated by a copy of the Larousse Gastronomique, found at home. The volume extolled classic French gastronomy, a sign of the pervasive influence of French culinary high culture. Its pictures and recipes provided windows into a faraway and exotic world that Thiam would get to know only years later, when he moved to the US. In fact, in Senegal cooking was considered a female occupation, and although Thiam enjoyed eating, the idea of working in kitchen never dawned on him. However, when he moved to America and found himself working in restaurant kitchens, he enjoyed and found comfort in the dishes that the women in his immigrant community prepared, shared, and at times sold. Building on his sensory memory and on the food these women provided, and applying the restaurant techniques he was learning, Thiam started cooking Senegalese food. From that moment on, his frequent trips to Senegal and other places in Africa allowed him to constantly research the history, the practices, the scents and texture of local cooking traditions. His approach is almost ethnographic, as his cookbooks suggest.

Inevitably, our conversation moved to the future of African cuisines. Thiam pointed out that their success in the Global North is heavily determined by cultural mediation. African chefs constantly have to explain and reassure patrons about the unexpected familiarity of the cuisine of Africa, even if many ingredients, especially in the Americas, are already part of the local vernacular. The diffusion of commercial crops, which ensure higher yields and sales on the global market, threatens to displace plant varieties unique to Africa. The phenomenon, started during colonial times, has accelerated following the adoption of structural adjustment policies imposed by international financial institutions. Chefs, Thiam believes, may play a crucial role in the conservation of biodiversity by highlighting the qualities and the cultural value of ingredients that have suffered from being considered as backward, uncouth, and too closely connected with rural life. Including these products in recipes, illustrating them in books and other media, as well as providing a commercial outlet to producers, chefs can contribute to make African cuisines not only popular but also viable for farmers, shepherds and fishermen all over the continent. If farro from Italy sells well in gourmet and health stores, why not fonio?