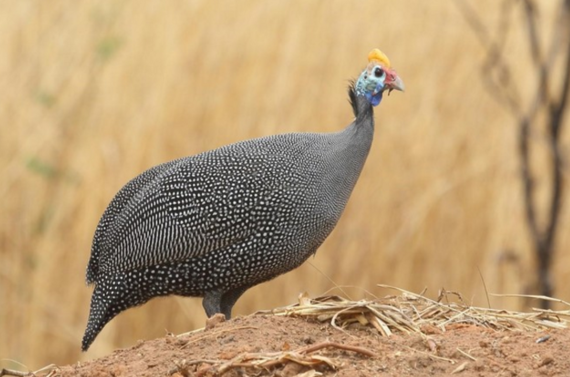 This article is a foundation essay. These are longer than usual and take a wider look at a key issue affecting society.

Africa is an evolutionary cradle of bird-kind for at least of one of its major evolutionary branches, the gamebirds. Around 290 gamebird species form the Galliformes - chicken-like birds. These include drab, small and monogamous quails/partridges in which males and females are indistinguishable. There are also medium-sized, spectacularly feathered, polygamous pheasants/peafowl whose males and females are strikingly different. And finally, the gigantic promiscuous turkeys.

Together with the duck/goose-like Anseriformes, the gamebirds occupy the second oldest branch, after ostrich-like birds, of the avian evolutionary tree. Since gamebirds also occur on all continents except Antarctica, understanding their evolution could provide insight into patterns of global avian evolution. Yet, as recently as 1959, the world's most respected ornithologist, Erwin Stresseman, lamented the failure of evolutionists to produce a scientifically sound avian phylogeny or evolutionary tree.

In 1990, molecular phylogeneticists Charles Sibley and Jon Ahlquist produced what became known as The Tapestry. This was a phylogeny for all major bird groups. It was based on a biochemical technique known as DNA-DNA hybridization.

DNA-DNA hybridization assesses the DNA divergence between pairs of species using a measure known as delta T50H. This measures the heat that's needed to separate a hybrid helix produced by joining single stands from the different species. A high delta T50H indicates a relatively close phylogenetic relationship between the species. A low one, then, shows a distant relationship.

Sibley maintained that since DNA mutates at a constant rate over time, differences in delta T50H - calibrated with fossil/geological evidence - could be used to estimate the timing of phylogenetic branching.

He summarised this view succinctly:

Anatomy is adaptive and hence evolves erratically depending on natural selection. DNA keeps the time.

Sibley's findings were heralded as a major scientific breakthrough by scientists and public intellectuals. Harvard phylogeneticist Stephen Jay Gould even proclaimed in his widely-read column in Natural History that the duo's results should be shouted from the parapets.

Sadly, this did not happen.

Sibley showed me The Tapestry before it was published, since I study gamebird phylogenetics using anatomical and behavioural/life history evidence. My results differed from The Tapestry, especially with regard to the placement of guineafowls. These are a family of African gamebirds. The discrepancy incensed him and he dismissed my findings as being based on a few bumps on bones. He could be quite irascible!

Soon after The Tapestry was published, a team at the University of California published the first DNA tree for gamebirds based on sequenced DNA. This research analysed a short sequence of mitochondrial DNA which has no effect on an organism's anatomy. It placed guineafowls in the same tree position as in The Tapestry. Sibley claimed that his study was vindicated.

Problems with The Tapestry

The Tapestry was criticised on a number of grounds. Chief among these was that DNA-DNA hybridization depends on overall - both ancestral and evolutionarily derived - DNA similarity.

Ancestral similarity, like the presence of hair or mammary glands in mammals, is of no phylogenetic use in working out the relationships among mammals. These features were, after all, inherited unchanged from near relatives. Analytical approaches to phylogenetics based on overall similarity - known as phenetics and used by Sibley - produce biased results because of the effects of ancestral similarity.

The universally accepted method of determining phylogenetic relationships, cladistics, determines relationships between lineages - tree branches and their intervening connections - only on the basis of shared derived evolutionarily novel character similarity.

A second major criticism of The Tapestry was that it excluded organismal - anatomical, behavioural, physiological and life history - evidence. Sibley believed that such things were prone to convergence, phylogenetically misleading evolution, due to adaptation.

I am a proponent of combining all evidence in phylogenetic analyses. In other words, DNA does not stand for "Don't Need Anatomy".

In the end, when large amounts of DNA sequences, partitioned into ancestral or derived characters, were analysed together with similarly partitioned organismal characters using cladistics, many of the results of The Tapestry were confirmed. Others were refuted - including those for the gamebirds.

In 2006, long after Sibley's death, myself and a team of molecular biologists produce a well-supported phylogenetic tree for the gamebirds. This was done through cladistic analyses of combined organismal and DNA evidence. The tree was calibrated with fossil evidence and suggests that the gamebirds' evolutionary roots are in the southern mega-continent, Gondwana. They date back almost to the mass extinction of the dinosaurs some 65 million years ago.

The oldest evolutionary gamebird lineage diversified around 64 million years ago into the Australasian megapodes. They use rotting vegetation and even volcanic sand to incubate their eggs. Next, around 61 million years ago, came the cracids. These have evolved and diversified extensively in South and Central America.

Then, contrary to The Tapestry, come Africa's guineafowls around 54 million years ago. No matter where you are in sub-Saharan Africa, you can encounter at least one of the six guineafowl species.

Then the situation within Africa gets fascinating. In 1992, I was sent a manuscript describing a new species as a francolin or spurfowl. This gamebird is about the size of a partridge. It is found only in the forests of Tanzania's Udzungwa Mountains. But, based on its anatomy, this Udzungwa gamebird is not related to any African spurfowl or francolin. The discoverers of this new gamebird were forced to place it into its own single-species genus called Xenoperdix. When loosely translated, this means:

I don't know that the hell this partridge is related to.

When Xenoperdix was included in the study that refuted The Tapestry, our team found it was unrelated to any African gamebird. Its nearest living relatives are partridge-like gamebirds from south-eastern Asia.

Equally surprisingly, we found that Nahan's francolin, which occurs only in north-eastern Democratic Republic of Congo and western Uganda, is most closely related to another evolutionarily enigmatic African gamebird - the Stone Partridge Ptilopachus petrosus.

Finally, these two sister-species are not related to any African, European or Asian gamebird. Their nearest, very distant, relatives are the north and south American, or new world, quails.

Our team also determined the evolutionary affinities of Africa's most spectacular avian discovery of the 20th Century, the Congo Peafowl or Afropavo congensis. They're only found in the Central Congolian lowland forests of the Democratic Republic of Congo and are that country's national bird. Afropavo was first thought to be related to the guineafowls and its peafowl-like features were believed to have evolved independently from those of Asian peafowl. We found that it is, in fact, distantly related to Asian peafowl.

Our research suggests that after the guineafowl evolved in Africa, the next major gamebird lineage that split off also has its roots around 50 million years ago in Africa with the stone partridge and Nahan's francolin. The common ancestor of these species emigrated from north-western Africa through western Europe into North America, giving rise to the new world quails.

At about the same time, there was a second emigration out of Africa, this time from the continent's north-east into Eurasia. It had roots in Xenoperdix and gave rise to the remainder of the Eurasian and north American gamebirds. These include the grouse, turkeys, pheasants, partridges, Asiatic francolins, quails and peafowls.

Finally, around 17 million years ago: there were multiple emigrations from Asia back into Africa that gave rise to Afropavo and the African francolins, spurfowls and quails. So, like with modern Homo sapiens, modern gamebirds are largely evolutionary products of out-of-Africa emigrations.