As Halloween approaches it was only a matter of time before racially insensitive photos hit the web of people dressed up in blackface. This time, however, it's connected with a young woman's 21st birthday party rather than a Halloween themed gathering. Buzzfeed brought the offensive photos to our attention. 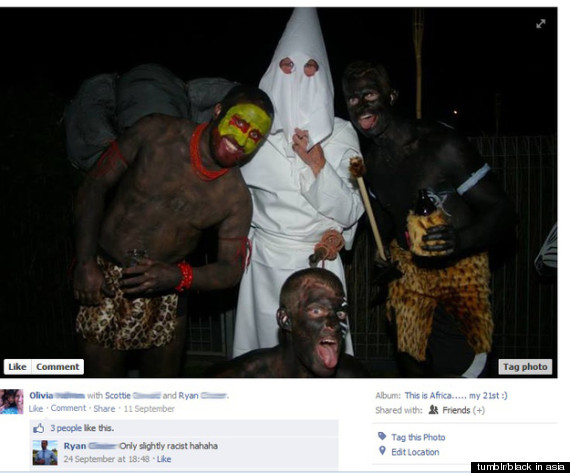 The Tumblr user "BlackInAsia" was alerted to the photos through one of his followers and shared them with this context:

Attendees were all asked to wear “African themed” clothing to depict the continent and this is what resulted… blackface, elephant and gorilla costumes, warpaint, native American headdresses (?!) and more…. I’m at a loss for words.

The girl posted the pictures proudly and flatly refused to take them down when confronted by another individual about how they were racist apparently. Pictures were reported to facebook weeks ago and they still have not been taken down.

In case you ever wanted to know how white folks saw us black Africans… here you go.

The girl, known as Olivia Mahon, lives in Australia and wants to teach English in Africa one day. Shortly after the photos were shared on Tumblr, she posted an explanation for the photos (where she also refers to Africa as a country).

"In fact as you can tell from the photos I dressed up as cleopatra, whilst MAJORITY of my guests came as animals, that can be found in africa or wore traditional african clothes or even dressed up as famous people who come from africa. If anything this was to celebrate the amazing country and people. "

You can read her full clarification on BlackinAsia's Tumblr page.

The birthday girl planned the party using a Pinterest pinboard, where she pinned photos with captions like, "Though now in Africa you also have people who live in modern day houses like us. The woman tend to dress more traditionally and the children play outside and go to school." She also highlights "beautiful" African woman, safari-themed cupcakes and inspiration for her Cleopatra outfit.

This isn't the first time we've seen this. In recent history, there was the "African Queen" editorial in Numero Magazine, with a white model in blackface; University of California-Irvine produced a video featuring a member in blackface, and two students from Beta Theta Pi fraternity at the University of Florida attended a party donning blackface last year.

Two students from Northwestern University made headlines in 2010 for attending parties in blackface. A similar situation happened at Lehigh University. The "Compton Cookout" hosted by members of the Pi Kappa Alpha fraternity at University of California-San Diego is another incident that sparked outrage.

And this latest party making headlines is yet another example of what not to do when hosting a party. 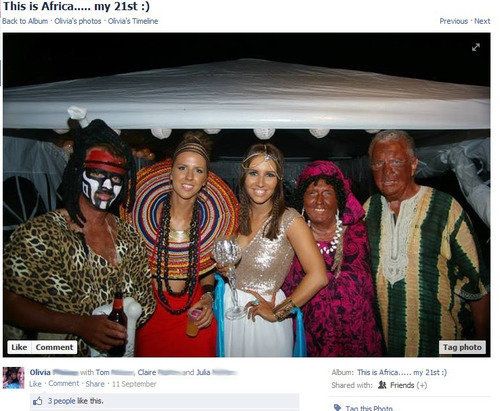