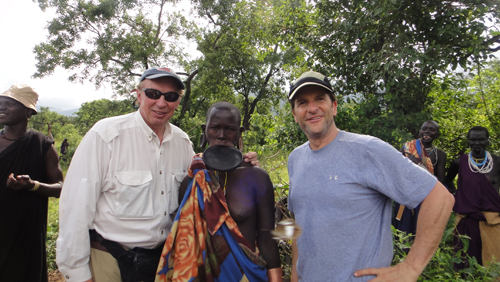 What happens when a group of film and television producers, master modern storytellers, travels to Africa, specifically Ethiopia, the cradle of Man and the source of all storytelling, on adventure? They find stories, some with an unexpected twist.

A large catalog of celebrated American films and programs is credited to members of this entourage, such as The Color Purple, the Lord of the Rings trilogy, Rain Man, Gorillas in the Mist, the Twilight series, Batman and even the television hit Mad Men.

One of the goals was to travel to the Omo Valley, where a dam under construction will force the relocation of thousands who have lived in relative isolation for millennia, relying on oral traditions to teach and inspire, to connect and tell purposeful stories that celebrate their past and plot their future. One of the great advantages distinguishing Man from beast evolved here with the faculty to tell stories, the ability to pass on a common history, to communicate an ethos and social contracts, to trade techniques and lessons (how best to hunt the mastodon) and to lay the foundation for prospects and opportunity. This state-of-the-heart technology was the glue that connected community, and developed society. 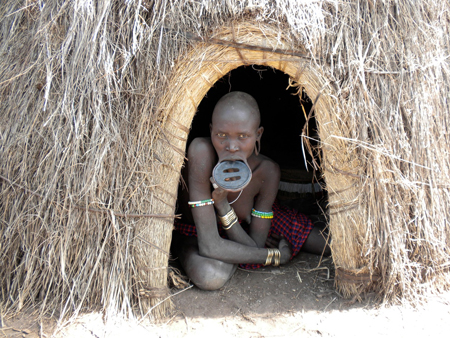 But now the dam, which will bring needed hydropower and irrigation for an unhinging population, threatens the way of life of several tribes, as well as their sacred lands, and will bury dreams and touchstones. A paradox is that these aboriginal storytellers, who birthed tales that stretch the continuum of time to the present, now do not have the technology or tools to communicate to the wider audience their plight, their opinions, their stories. In a way, this is an old story, associated with every major dam ever constructed, but this is the first time the earth's original storytellers are about to have their voices cut.

But the real unanticipated plot turn came later, further north. We arranged to run the rapids of the Blue Nile, from its beginnings as it efflues from Lake Tana, largest lake in Ethiopia, third largest in Africa, down an 18-mile whitewater sprint to the lip of the 150'-high Blue Nile Falls, second largest in Africa.

James Bruce, in his search for the source of the Nile, came upon the falls in 1770 and described it thusly:

"The river ... fell in one sheet of water, without any interval, above half an English mile in breadth, with a force and a noise that was truly terrible, and which stunned and made me, for a time, perfectly dizzy. A thick fume, or haze, covered the fall all around, and hung over the course of the stream both above and below, marking its track, though the water was not seen.... It was a most magnificent sight, that ages, added to the greatest length of human life, would not deface or eradicate from my memory." 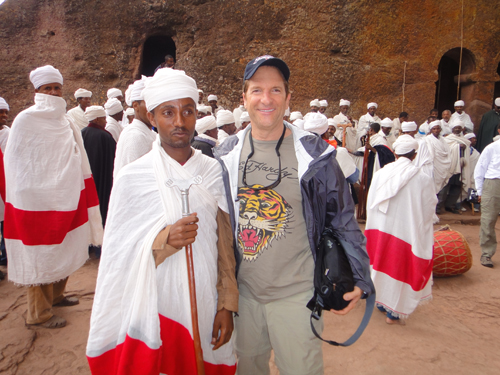 The day before our raft trip we stood before the immense manitou of the Blue Nile Falls, watching the water spout and bloom like gargantuan brown mushrooms and the mist shape and move like a time-lapse sequence of clouds. We hiked to its base, and shivered beneath the raw, deep voice of nature and an architecture supported by the brilliant beams of rainbows.

The river trip was being led by Pasquale Scaturro, the explorer who made the first and only full descent of the Blue Nile from its source all the way to Alexandria, Egypt in 2003. After viewing the Falls, he scouted the river for our expedition to begin the day following, and pronounced the river level and conditions ideal.

With keen expectations we launched down the russet-skinned river the morning next, and within minutes rounded a bend and purled into a bloat of snorting hippos. One female, annoyed with our passage, began to charge one of the rafts. Some claim more deaths in Africa each year from hippos, more than any other wildlife. Proportionately the fattest animals on earth, hippos nonetheless can gallop as fast as a horse, and routinely turn over boats and snap occupants in two.

But the real scare came another hour later as we cascaded down a small set of rapids and lodged on the rocks. The rocks had been covered by the river's flow the day before. Now, we had to climb out of the rafts and push and wrestle them through the cataract. The next set was worse. And beyond, worse yet. And the banks were stained wet with recent water flow. The river was literally disappearing beneath us, draining like a bathtub. How could this be? There was no dam upstream...only Lake Tana. Finally, we could navigate no further, the river almost dry, and we had to abort the trip, and trek across burning basaltic fields to the road.

In the nearby lakeside town of Bahir Dar, fishermen and ferryboat drivers, who carried pilgrims to island Coptic monasteries (one of which claimed to have housed the Ark of the Covenant), were puzzled that their boats were listing on wet sand as the lake waters receded. But one Ethiopian technician, a former UN representative, shared the explanation. A 26-kilometer-long tunnel draining Lake Tana for electricity and irrigation had just been opened. Called The Tana Beles project, it is the largest hydropower plant in Ethiopia, with a generating capacity of 460MW. The water gushes out of the tunnel and falls 275 meters onto four turbines, and then flows out of the plant where it irrigates dry plains, never re-entering the Nile. Like its counterpart on the Omo, it is designed to help an exploding population (83 million in a country twice the size of Texas), yet perhaps at cost to not only the rare rafters, but to some 80 million people downstream in Egypt, as well as another 30 million along the Nile in Sudan. 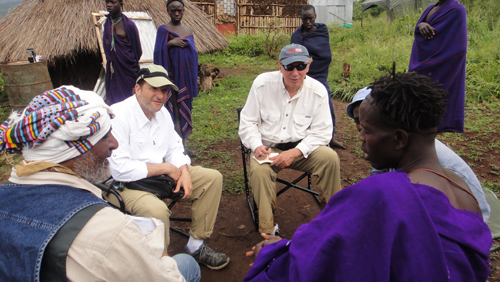 Discovering the source of the Nile was the great 19th-century geographical quest that consumed such as David Livingstone, Richard Burton and John Speke, and many others. While the White Nile is the longer of the two streams that join in Khartoum to create the Nile proper, it is the Blue Nile that contributes about 85 percent of the water that powers Egypt, and most of the precious silt that nourishes its banks. If the Blue Nile dries up, or is dammed or diverted in a significant way, Egypt will die.

In 1929, there was an agreement between Egypt and Britain stipulating that "no irrigation or power works or measures are to be constructed or taken on the River Nile or its tributaries... which would entail prejudice to the interests of Egypt." Since Ethiopia had never been a British colony, or part of any European power for that matter, except for the five years (1936-1941) of occupation by Fascist Italy, it maintained that the agreement had no legal effect on it. Nonetheless, Ethiopia looked elsewhere for its power, and for the next 80 years allowed the Blue Nile free-flowing.

In 1970, Anwar Sadat, then President of Egypt, hearing rumors that Emperor Haile Selassie was thinking of damming the Blue Nile, threatened to go to war with Ethiopia. He stated: "Any action that would endanger the waters of the Blue Nile will be faced with a firm reaction on the part of Egypt, even if that action should lead to war." 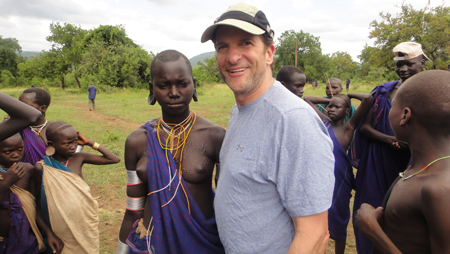 Draining Lake Tana is a technical sidestep, as the Blue Nile begins as it flows out of the lake. The half-billion dollar project has been kept as quiet as possible, away from the eyes of much of the international community, though Egypt, suddenly aware, has warned that water rights in this case are a "red line," and the project could lead to war. Meles Zenawi, the prime minister of Ethiopia, told Al Jazeera that Egypt will not be able to stop his country from building dams on the river.

IN Addis Ababa, we sought out Donald Booth, the newly-appointed US Ambassador, who is steering U.S. involvement with economic development, human rights, and environmental issues. He appealed for our participation and support in viewing several short films on "Democracy," produced by young Ethiopian filmmakers, funded by the US State Department, and distributed on YouTube. The project gives apparatus to aspiring storytellers, allows them voice and audience. But so much here remains soundless. When we asked the Ambassador about the Tana Beles project, he said he had not heard of it, and vowed to travel to Lake Tana to check it out. It is a tale in the lobster trap of African politics; a narrative suppressed.

Every story needs a resolution, and this one has yet to be written. The best stories evoke an emotional response, touch a deep cord, and motivate action and change. The oldest storytellers on earth spun their yarns along these waterways, and they do still, though without the reach and means to affect their fates. Yet, perhaps through accident or providence, it was their "tell" to a lineage of foreign visitors, a small group of modern storytellers with the internet and digital media in their kits, that lit a campfire of compassion, and provoked this story-offering to a global public, who in turn, if inspired, could influence the outcome, perhaps in a way the forerunners of all storytelling would approve.

Peter Guber is the author of a forthcoming book from Crown, March, 2011 on the power of purposeful story telling. Follow @PeterGuber on Twitter and on Facebook. Richard Bangs' authored "The Lost River," about his first descents of Ethiopian rivers, including the Omo and Blue Nile (Random House/Sierra Club), and co-authored "Mystery of the Nile," (Putnam), in 2005.