MARRAKECH, Morocco - The Africa that I visited recently was very different from what I had read about in U.S. newspapers. Instead of terrorist attacks and marauding gangs, I saw economic vitality, world-leading innovation and an all-smiles eagerness to join - and cash in on - the global economy.

I spent 12 days traveling to remote corners and cities in Ghana and Kenya. My visit was focused on renewable energy and whether it can help solve sub-Saharan Africa's vast energy access gap where 620 million people live without electricity. I was encouraged by what I saw, with millions of more people now getting solar, geothermal and other green power at a far cheaper cost than high polluting kerosene and charcoal.

But I also came away with something bigger: many parts of Kenya and Ghana are thriving, transforming and leap-frogging in ways that the rest of the world could learn from. And much of their best thinking is focused on solving society's most intractable challenges, such as climate change, the focus of key world leader meetings underway this week in the Moroccan city of Marrakech.

I arrived in Ghana with the usual assortment of traveller fixtures - a money belt for security, mosquito repellant for malaria and a headlamp for power outages. I used the repellant, but the headlamp and money belt never left my suitcase. No matter where I went, whether it was a poor fishing community in old Accra, jammed city markets in northern Ghana, or a slum near Kisumu in western Kenya, I was always welcomed.

I visited these countries at an opportune time. Their economies are growing, the media is relatively open and upcoming presidential elections are freely discussed. They are also benefitting from increased foreign investment, especially from China, which is spending billions on new highways, railways and other key infrastructure that are opening up textile factories, flower farms and other industries.

Africa has the youngest, fastest-growing population in the world. It has the world's fastest growing workforce, and consumer spending is set to climb to $1 trillion over the next four years. Sub-Saharan Africa, in particular, has been one of the fastest growing economic zones globally the past few years.

Whether you are the CEO of Google, Ford or General Electric, these numbers matter. Africa is the next big frontier for Internet growth, selling consumer goods and global investment. IBM and Google have major offices in Nairobi. The internet giant even announced last year it was acquiring an ownership stake in a 310-megawatt wind farm in Kenya, Africa's largest. Just last month, Ford announced plans for selling its iconic Mustang sports cars in Kenya.

"Africa is a critical market for the US politically and economically, as well as for global security," Andrew Herscowitz, coordinator of the Obama Administration's Power Africa program, told me in an interview in Nairobi.

Drive anywhere in Kenya and Ghana and you will see bright green signs for M-Pesa, a mobile money transfer system that enables millions of Africans to borrow or transfer money to other users, pay bills, purchase goods and earn interest, all from a basic mobile phone.

And M-Pesa is spawning other global breakthroughs, including M-KOPA Solar, a Kenyan company is providing 425,000 customers with household solar systems in Kenya and other parts of East Africa. With a $30 deposit and daily 50-cent payments, all by cell phone, M-KOPA's customers get a solar panel, a couple of lights, a cell phone charger and a solar-powered radio. After the first year of payments, customers own the system outright. Customers also develop a credit history enabling them to finance larger solar equipment that can run bigger appliances. 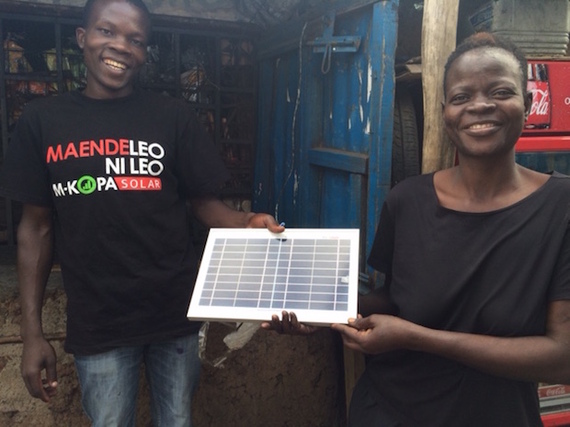 Consonlata Andhiambo Odero, who lives in western Kenya and is seen here with an M-KOPA sales rep, is all smiles as she shows off new solar panel that is powering solar-powered lamps so so her kids can read at night. M-KOPA's pay-as-you-go household solar systems have been a huge hit all across East Africa.

"I have no doubt this is a millions of homes proposition,' M-KOPA founder and managing director Jesse Moore told me.

Moore and other green entrepreneurs in Africa leave no doubt about their long-term intentions. In addition to providing clean reliable power, they intend to make money. This is not charity.

And there is no limit to the possibilities. With solar power costs plummeting and consumers abhorring their unreliable local utilities, the specter of entire villages running on solar is not at all far fetched.

This is an important lesson as the U.S. struggles with its own aging infrastructure. Africa never needed telephone poles and lines because of cellular phones. Traditional banks are less necessary because people's money is being managed through those phones. And now, it may not need expensive, centralized power grids that the U.S. is still so dependent on. Instead of Africa taking a lesson from us, as is often the case, we have a lot to learn from Africa.

Peyton Fleming is a senior director at Ceres, a nonprofit sustainability group based in Boston. Learn more at www.ceres.org or follow on Twitter @PeytonCeres