While the media universe, or at least the American media universe, gets ever more besotted with the Republican Party's bafflement over Donald Trump, and Fox News' showcasing of the party eating itself alive, and with Hillary Clinton's private email server supposedly threatening her securing of the Democratic nomination -- there sits quietly a powerful news story that is gaining precious little attention.

That's in spite of it being simply quite astonishing -- in fact, virtually unheard of in history.

'Stop the presses!' we could cry. For the entire continent of Africa has been polio-free for a whole calendar year.

That may not be earth-shattering news to you, unless you feel deeply committed to, or are simply very interested in, matters African. In truth, though, it's news that is promoting a modest but swelling sense of confidence among the global medical community.

Africa, long regarded by many as a hopeless mess of infection and disease, looks like it's entering a whole new, much healthier chapter.

Somalia, where the viral-borne disease appeared to have fortified its presence in a stubborn defensive redoubt, nevertheless beat the disease back forcefully, and hasn't experienced an outbreak since August 2014. 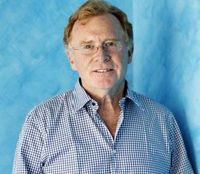 UNICEF's chief polio warrior Peter Crowley (right), welcomed this significant interval without any fresh resurgences continent-wide as "... an extraordinary achievement and a powerful symbol of the progress that has been made on the African continent over the past generation."

The victory has been achieved, of course, not only through an effective vaccine (known as OPV3), but also through unending labors across the continent by countless volunteers, traditional and religious leaders, and much determined work by national and local governments. Internationally it was backed by a remarkable and well-coordinated partnership between the World Health Organization (which here showed sharper responses than in the Ebola crisis), UNICEF itself, Rotary International, the US Centers for Disease Control, and (not to forget them, ever) the epically deep-pocketed Bill and Melinda Gates Foundation.

In Nigeria, a little more than a year's freedom from polio (its last outbreak occurred in July 2014) was achieved in the face of extraordinarily grave challenges. Vaccinators were attacked, and nine were killed by gunmen suspected of being from the violent Islamist extremist group Boko Haram, who have propagandized that the vaccination program is a plot to sterilize Muslim children.

Mainstream mosque representatives were recruited in a wholesale effort to reassure doubtful populations (an approach pursued in other countries besides Nigeria) and mercifully good sense and good health both won out in the end.

In the face of such success, the media can still be forgiven for not making a huge deal of it. The winners themselves in this battle are deliberately being very cautious about their progress. Health authorities nationally and internationally are leery of banging the drums in a noisy celebration, which could still, they fear, prove premature.

Peter Crowley at UNICEF is at pains to point out: "today's milestone is extraordinary, but it is not an endpoint." And of course he is right. At-risk African countries will have to maintain their intensive monitoring efforts, and continue to mobilize and improve, their vaccination campaigns. And also, importantly, act swiftly and decisively if indeed a disappointing new outbreak does occur.

An excess of caution right now within official ranks might be admirable. But I for one hope that the low-key reporting that has accompanied this caution will not diminish the thanks and congratulations that are due to millions of dedicated health-workers in Africa, both paid and voluntary, for their supremely heartening achievement.