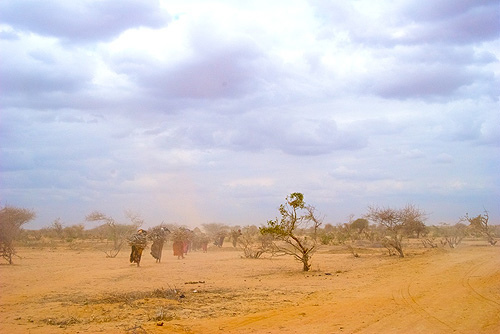 "Whenever they's a fight so hungry people can eat, I'll be there", said Tom Joad of the Grapes of Wrath. Resolving to connect his soul with the greater identity of humankind, Tom exclaims, 'It's love. I love people so much I'm fit to bust, sometimes.'... Maybe all men got one big soul ever'body's a part of.' Now I sat there thinkin' it, an' all of a suddent-I knew it. I knew it so deep down that it was true, and I still know it.'"

Where is today's Tom Joad?

Set during the Great Depression, the Pulitzer Prize winning novel tells the story of the Joad family -- sharecroppers driven from their Oklahoma home during the legendary 1930s Dust Bowl where more than 2.5 million people migrated in search of food, jobs and a future.

Now, more than 60 years later, memories of John Steinbeck's book come back to me as I stand in the middle of Dadaab refugee camp, 100 kilometers from the Kenya-Somalia border, home to more than 6,000 third-generation refugees, grandchildren of the original arrivals, and more than 420,000 Somalians, and growing daily. I am part of a delegation on mission to raise awareness around the impact of famine and malnutrition across the Horn of Africa. With me are Cindy McCain, philanthropist and wife of United States Senator and 2008 presidential candidate John McCain, NBA legend Dikembe Mutumbo, Somali Canadian poet and rapper K'NAAN and Josh Lozman from ONE.

Similar to the 1930s across the American Great Plain states, prolonged drought in southern Somalia has turned the region into a dust-bowl, causing widespread famine and a mass exodus into neighboring countries in search of for food, water, shelter and hope. Often walking for weeks across the arid land before they receive assistance, several women describe for us their perilous journey to save their children from starvation. The Somali women's hunger march brought me back to my high school English class, where I first read The Grapes of Wrath:

And then the dispossessed were drawn west- from Kansas, Oklahoma, Texas, New Mexico; from Nevada and Arkansas, families, tribes, dusted out, tractored out. Car-loads, caravans, homeless and hungry; twenty thousand and fifty thousand and a hundred thousand and two hundred thousand. They streamed over the mountains, hungry and restless - restless as ants, scurrying to find work to do - to lift, to push, to pull, to pick, to cut - anything, any burden to bear, for food. The kids are hungry. We got no place to live.

We visit the local hospital in Dadaab where makeshift hospital tents set up by local aid groups are filled with severely malnourished children. A mother clings tightly to her skeletal 4 year-old daughter who weighs a meager 14 pounds. Unable to move her head enough to make eye contact, her gaze seems lifeless, as if it is too much energy to blink. Physicians at the local hospital explain that these children are the lucky ones considering more than 30,000 children have died in the last three months in southern Somalia alone.

Lost for words to describe the hardship of life in Dadaab, we walk around the camp grounds talking with women and men about their challenges, hopes and desires. The sight of Dikembe, a gentle giant standing 7'2," creates commotion among the children who he welcomes with open arms and a smile. At the feeding center where people come once every two weeks to pick up their meager aid rations of grains, dried beans and oil, K'NAAN's presence causes quite a stir among the young men as they gather to speak to their legendary brother. Women, squatting in the hot sand hiding from the scorching sun under the shade of scrub brush, share their stories with Mrs. McCain. Her warm and welcoming presence put the women at ease as they speak of hardship within the camp life. According to UN Refugee Agency, sexual and gender-based violence against women in Dadaab has quadrupled in the past six months.

Selfishly, all I could think of as I looked at the dust covered children, arid landscape and the overcrowded camp where tens of thousands of tents scatter the landscape, is how the hot gusting wind is making the dust feel like pellets stinging me in the face, my eyes burn and I find it hard to breathe. Swallowing without water was virtually impossible, and I can taste the dirt as the grit crunches between my teeth. I wonder how anyone can ever get used to this place. I'm dumbfounded that the international community has failed these people by allowing Dadaab to exist for more than 20 years without finding a better solution.

Dadaab was only set up to host 90,000 refugees -- a number surpassed more than 5 years ago. The influx of new arrivals into the already severely overcrowded and under-resourced camps has exacerbated shortages of shelter, water, food, and healthcare for all refugees. What will happen when the number climbs to 500,000, which is estimated to occur before the end of this year? In silence, I ponder what the Somali people have done to deserve such a sentence? Dadaab seems more like a prison to me. A host of perverse incentives inhibit Dadaab inhabitants from leaving. Refugees cannot receive humanitarian assistance outside the camp, and they can't leave the camp unless they receive special movement passes -- caught without a pass, they risk arrest, detention or expulsion.

But faith and hope in a better tomorrow is alive in Dadaab, and we witness the resiliency of the Somalians spirit. Buufis is a Somali word that stands for longing or desire for something specific, an ambition, or dream. In Dadaab, Buufis refers to one's hope for resettlement. Dreams of travel suffice for real travel and Buufis 'grows' to help them survive the wait and escape despair. I find myself fascinated by the Somali people and their culture. Why have our media only portrayed Somalia as a land of maundering gunman and pirates, when for centuries, Somalia has been known as the 'Nation of Poets'.

Steinbeck's observation that "The last clear definite function of man -- muscles aching to work, minds aching to create beyond the single need -- this is man. To build a wall, to build a house, a dam, and in the wall and house and dam to put something of Manself, and to Manself take back something of the wall, the house the dam; to take hard muscles from the lifting, to take the clear lines and form from conceiving. For man, unlike any other thing organic or inorganic in the universe, grows beyond his work, walks up the stairs of his concepts, emerges ahead of his accomplishments," applies to all those mothers who walked miles and miles to simply feed their children.

The Grapes of Wrath ends with a message of transcendence through solidarity when the Joad's daughter breast feeds an old man too malnourished to feed himself. It was the act of kindness and redemption from one stranger to another that acknowledged we are all indeed in this thing called life together, we matter and we have voices. While on a grand scale Somalia's problems and the problems within the Horn of Africa seem intractable, that does not mean the people there should be discounted or ignored. If there is a call to action to be deployed in this region it may very well be that the suffering here be not in vain. That we acknowledge their plight, but more importantly that we confirm their humanity.

Maybe all men got one big soul ever'body's a part of.