The mess we made with our wealth

We spend and borrow, ignoring tomorrow. Somehow, that became the American way. We max out credit cards and take out new loans to pay off old ones. And three years into the worst economic crisis the U.S. has seen in a century, our fiscal gurus recommend to keep doing more of the same: Jeffrey Sachs, Ben Bernanke, and Timothy Geithner all hail the counterintuitive strategy of racking up more national debt in subsequent stimulus plans (i.e., borrow even more against the future) to bail out our economy today.

What happened to the America in which I grew up, where the adults around me in Ohio worked hard at the same job for decades, lived modestly until they'd saved for big purchases, and retired comfortably with a gold watch while they still had their wits and golf skills intact? What happened to the land of the free, where one could work hard to achieve any dream? 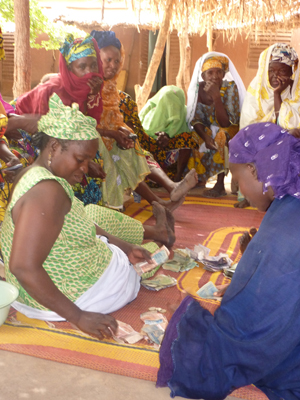 Having just returned this summer from visiting remote rural villages in Mali, West Africa, I have to say that I learned more from the locals about cash management than dire poverty. Traveling with U.S.-based nonprofit Freedom from Hunger, I saw firsthand the ways in which villagers combine entrepreneurial zeal with community support to get ahead.

Mind you, for this population living on an average $1.25/day (according to the World Bank, which measures U.S. per capita as an average $128/day), "getting ahead" means being able actually to feed the family three meals a day, and to purchase malaria medication during the relentless rainy mosquito season.

Rural women in Mali use a financial system based on an ancient indigenous tradition called tontines or merry-go-rounds, with a few key 21st-century improvements. They create formal groups of 20-30 members who commit to saving money (e.g., $1/week) and vote on group rules for attendance and fees. The pot of saved money gets split into big-chunk loans enabling members to purchase inventory for their businesses (e.g., goods to sell in the market) or make investments in their families (school fees, health care, weddings and funerals). Interest charged on loans creates the interest paid on savings; each member chooses how much she wants to/can save. An advanced group in Dio Garé Village collected about $1,000 during the meeting we witnessed. All that money then got redistributed among members in business loans and savings interest, and at the end of the hour, the box sat empty again. . . until next week.

Most groups agree upon a "social mission" for their community, like gathering one Saturday per month to clean out the village health center, or working as a team to recruit more savings members. Some profits go toward luxuries we take for granted, such as hiring teachers for their local schools or bringing in adult educators to teach them business management.

Freedom from Hunger, based in California, has a subsidiary office in Mali staffed by West Africans who work with small local nongovernmental organizations (NGOs) to take the savings group model to scale. Known for its expertise in designing education for very poor, often illiterate women, Freedom from Hunger brings two unique add-ons to the savings process: First, they train local field agents to run classes in health, financial, and business training. Second, they've initiated a volunteer "replicator" program so villagers can learn to launch even more groups on their own.

No one's getting rich yet. So far, the women we talked with just want to help other families get ahead of chronic hunger. One replicator named Bako Diarra, in Wérékéla Village, told us that in appreciation of her volunteer leadership, local women sometimes help pick her vegetable (soumbala) crop at harvest time. She felt that when the others clapped for her at savings meetings, that was plenty of payback: "I feel happy and proud," she said, "and I become more courageous and strong" through leadership.

Banking inside a little blue box

For some reason no one could tell me, all the "banks"--metal boxes about the size of a tackle box--are painted blue. There are up to three small padlocks on the box. Three different women carry those keys, and a fourth hides the box someplace safe in her home. The box gets opened only during public meetings, and the money is counted by the group's treasurer in full view of twenty pairs of hawk-eyes. The circle has a precise seating placement, for each member keeps track of her own finances plus that of the woman to her right. Some groups employ common objects to symbolize financial transactions: e.g., you put your flip-flop in the center of the circle to show you are requesting a loan this week, or you put four small sticks inside the blue bank-box to represent the four future weeks in which you will make payments on that loan.

Some circles keep written ledgers. But in most of West Africa, members keep all accounting in their heads. They may not have had the chance to learn letters and numbers yet, but they know down to the penny how much Aminata put into the pot last month, and how much the group will gain in late fees from Makona and Massitan showing up late to today's meeting.

What we learn by observing rather than serving people in poor communities has begun to shift how economists calculate financial realities in the developing world. Portfolios of the Poor (Princeton, 2009) aptly demonstrates with long-term, in-depth financial diaries, that we have no idea how complex it gets trying to feed a family on an unpredictable, tiny income--or how inventive poor families are in saving and borrowing to get by.

Granted, savings circles have a long way to grow. Members may wish to accrue larger sums than a cash-only system can sustain. They may seek access to conventional bank accounts or mobile-phone cash management, to save for their old age or to move money around via village-to-city remittance payments to help their kids get established in college or jobs. Villagers clamor for capital equipment such as motorized wells and mills to increase their efficiency. They strive to move up from the daily grind for subsistence into dynamic strategies for income and asset building.

Given that the women we met in rural West Africa have, as yet, no access to electricity, plumbing, cell phones, or the Internet, it should be surprising how enterprising and ambitious they are. 46-year-old Massitan, who tills rice in Niaro Village, says that "paying my loans on time keeps me alive." Onion farmer Alimata tells us, "We have a competition among us to see who can work the hardest with her loan. We work all night sometimes. Our men and children work hard too." Bintou, her neighbor in Louta Goura Village, declares that "school fees are the most important issue" to everyone here. Since the launch of modern savings circles in Mali in 2005, Freedom from Hunger has tracked total members' savings at over $7.5 million.

What the poor can teach us about progress

Maybe this seems like a world away from my longing for a new pair of shoes or vacation in Hawaii. But what I realized as I sat around the savings circles was that these mothers have more in common with me than not. We want health, peace, and prosperity for our families first, and ourselves second--not because it's noble, but because that's just the way mothers think. We want food and pretty clothes, and we never stop lusting after learning.

Many of the women we met extended invitations for us to come back to Africa again next year and check on their progress. They know they have the discipline to get ahead, one dollar and one harvest at a time. Several sighed when they said, "If only we could come and visit you in the United States someday."

If they could send a delegation, African women could teach us how to manage our money among our own families and communities. That could reawaken us to the possibility of what we can do on our own--without big banks, one person, one village at a time. We could return to the roots of what really works in capitalism and rediscover how far our dreams can take us when combined with hard work and persistent patience. Maybe the time has come for us Americans to take a humble look elsewhere in the world for lessons on how to live.