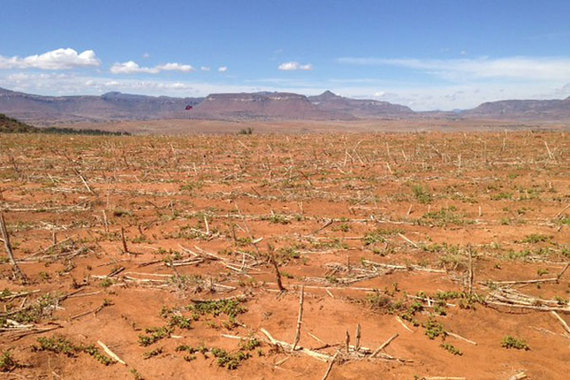 Experts use many numbers when talking about climate change. However, rising temparatures, the resulting crop failure, and the consequent loss of livelihoods and destitution of millions of households are this year's most important and urgent developments for millions of smallholder farmers across the vastness of the African agro-ecological landscapes.

To illustrate the unfolding crisis, let us consider the case of Malawi, one of the few countries to have achieved a fair deal of agricultural success but is now facing the worst drought in over three decades. As is the case with many countries in southern Africa, Malawi has experienced widespread crop failures due to a devastatingly strong El Niño. The country witnessed late on-set of rains, erratic rainfall, floods and prolonged dry spells this year.

As a result, the production of maize - the country's main staple crop - is estimated at just over 2.5 million tonnes in 2016. This is 16 percent lower than the reduced harvest in 2015 and 34 percent below the previous five‑year average and has left 39 percent of the population dependant on national and international food aid to survive - a 129 percent increase over last year's vulnerable population. In the hardest hit areas, harvest reduced by 70 percent while farmers in some areas simply couldn't plant as the rains never came.

Dealing with this challenge in the future will require both efforts to reduce climate change and, most importantly, strategies to enable farmers to adapt to its effects. All eyes are now on the outcomes of the meeting that took place in Marrakesh of the world's climate change experts and policy makers, aimed at setting the world on track to reducing greenhouse gas emissions that cause climate change. Last year, the same experts met in Paris and reached a welcome agreement that seeks to limit the rise in global temperatures above pre-industrial levels by 2℃. However, the emissions of greenhouse gases are not yet falling and the effects of climate change are worsening. Much more still needs to be done to address this challenge proactively.

Nowhere else is the imperative to act more urgent than in Africa, where 70 percent of the population is dependent on rain-fed, smallholder agriculture. As the case of Malawi demonstrates, rising temperatures in Africa often signal drought and other extreme weather events that put the lives and livelihoods of smallholder farmers at greater risk, increasing their vulnerability to famine and diseases. This reality is here with us today, and far beyond Malawi and southern Africa, with large swathes of the continent currently under the grip of a historical drought.

For this reason, those of us from the African continent hope that such a backdrop gave the first post-Paris meeting a greater sense of urgency. Inaction will be catastrophic. Although Africa emits less than 3 percent of the climate change inducing greenhouse gases, it will suffer its effects disproportinately. Mean temperatures will rise faster than the global average, exceed 2°C and may reach as high as 3°C to 6°C by 2100. For every year our global leaders fail to make progress against their commitments, it is Africa's families that will pay the greatest price.

This is not to leave everything in the hands of global leaders, as the prosperity of Africa and its farmers will also depend on how well farmers, especially smallholders, are able to adapt to the changing climate. This is much more within our control. Indeed, the work of AGRA and our partners has shown that African farmers are not powerless in the face of climate change. There are many ways in which they can survive and even thrive despite the dramatic shifts in growing conditions they are likely to endure.

For instance, farmers in some parts of Malawi, who are planting more drought-tolerant crops--cassava, sweet potato and pigeon pea--and using better agricultural practices are not only surviving the drought, they are expecting to generate a good income on this year's harvest.
The insurance and finance sectors have also stepped up to the plate by designing innovative products that are minimizing the effects of climate shocks to farmers. Still in Malawi, tens of thousands of farmers in the worst hit areas south of the country will now have access to credit from a microfinance institution that has protected these loans with a yield insurance that covers the crops against the impact of floods and drought.

Overall, to achieve food security under climate change, the resilience of communities and individual farmers needs to be strengthened through pro-active and longer-term adaptation actions. Although a lot more is yet to be accomplished, the continent has invested in the development and adoption of many new agriculture innovations and technologies which should be scaled up.

We cannot put off further action on mitigating and adapting to climate change without expecting even greater pain for smallholder farmers and others around the world. From Marrakesh to all countries' capitals and decision making tables around the world, I hope world leaders will seize the moment to take action and continue to put us on a path toward a better future. A future where African smallholder farmers can fully exploit their potential to deliver food security, contribute to poverty reduction and achieve inclusive economic growth and development.

President, Alliance for a Green Revolution in Africa (AGRA)