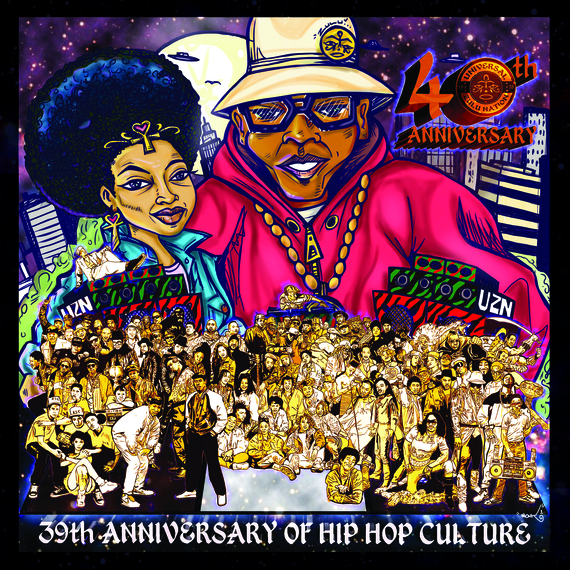 November is officially Hip-Hop history month! It's also the 40th anniversary of The Universal Zulu Nation, and the 39th anniversary of Hip Hop. Let's take a trip to the South Bronx of the '70s, which was a melting pot for both music and people. From this integration came the culture that would later spawn the music to be called Hip-Hop, or Rap. This was when it was in its purist form, which was just 'culture.' It's kind of hard to imagine, given its current state, but follow me anyway.

Hip-Hop was started during this time as a culture; at the jams, in the parties, in the parks, you name it. It was created in spite of some of the social and economic disparities of the Bronx, which included poverty, drugs and location. The South Bronx at that time was considered everything poor by American standards. What was not being documented to most outside of the culture was the culture of the South Bronx itself. A culture that was rich. A culture that changed lives through its artistic interpretation. A culture that would change the history of music and media forever. At the helm of this cultural movement called "Hip Hop" was Afrika Bambaataa, the founder of The Universal Zulu Nation. The Universal Zulu Nation at the time was a music-oriented youth organization that became a world movement.

Bambaataa pioneered the musical genre Electro Funk. He did this by grabbing a big pot and mixing up musical ingredients. The first ingredient was the pure funk sound of Parliament Funkadelic, George Clinton and Sly Stone. Next, he added a dash of electronic music from Japan in the flavor of Yellow Magic Orchestra, and a bit of spice from Germany, with sounds from Kraftwerk. The final flavor addition was the rich culture of the South Bronx which is now called "Hip-Hop." The staple dish of this musical mashup called Electro Funk was the critically acclaimed song Planet Rock, which he recorded with The Soul Sonic Force, which is still revolutionary to this today. 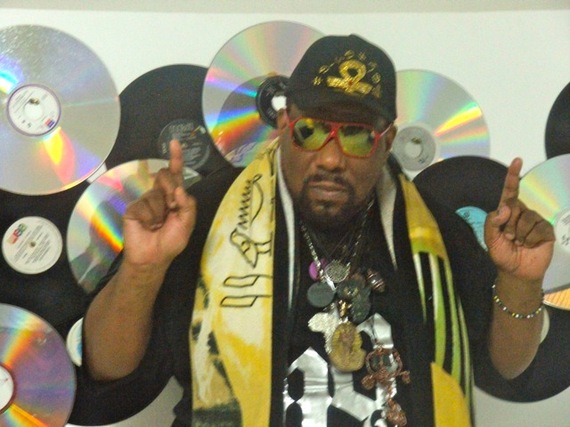 I had a chance to catch up with the legendary Afrika Bambaataa and ask him a few questions. Check it out:

Q: What was Hip-Hop like in the '70s before your created The Universal Zulu Nation?
A: There was no name to what was happening in The Bronx. The culture was coming off the backs of what was happening in The Bronx from the early to the late '60s. There were a lot of bands playing in the community playing popular songs by artists such as Sly and the Family Stone and James Brown. You also had DJs at the early radio stations like Frankie Crocker and Gary Bryd, which elevated into DJs from The Bronx playing music on their sound systems at parties. Eventually, the bands died out, and the DJs became the stars.

Q: A lot of artists felt like you brought a certain element to Hip-Hop. Can you elaborate?

A: The Universal Zulu Nation brought together the elements of peace, unity, love and having fun, which helped to eliminate any old gang activity that might creep up at a party. During the late '70s, we started adding lessons to direct the culture that is now called Hip-Hop, because we were in tune and inspired by the teachings of Elijah Muhammad, Dr York, the civil rights movement, the human rights movement, The Black Panthers, and many others. We also understood the messages in music from artists such as James Brown and John Lennon. We went around re-naming a lot of the brothers and sisters in the community with names like Tommy and Cynthia to names like Monifa and Ahmed. We called all of our productions Nubian Productions, because we felt it was important to take on our Africanism and bring it to the youth early on.

Q: Tell us about the birth of Electro Funk?

A: I was heavily into Techno Pop and the Yellow Magic Orchestra from Japan, as well as Kraftwerk from Germany. I was also a serious record collector and was attracted to the funky, crazy artwork. I played the record Computer Game by Yellow Magic Orchestra at a party, and the crowd loved it. The Zulu Nation audience was a very progressive audience. I also really liked the song Trans Europe Express by Kraftwerk with the futuristic instruments and music. The punk scene was also on the rise by then, so that had an influence, but I looked around, and didn't see any black groups that were strictly electronic. Dick Hymen did an electronic version of James Brown's Give It Up and Turn Me Loose, so I decided I wanted to make a straight up electronic band, with all the musical elements I was playing combined. This became the birth of Electro-Funk.

Q: What is the history of the ground breaking song "Planet Rock?"

A: The song "Planet Rock" was myself, and The SoulSonic Force. It was produced by Arthur Baker and recorded on Tommy Boy records in 1982. It's the most sampled record in Hip-Hop history. You will hear it used in "Control" by Janet Jackson to "When Doves Cry by Prince."

This week starting November 6-10th over 50 artists are performing at venues all over New York City to celebrate the 40th anniversary of The Universal Zulu Nation, and the 39th anniversary of Hip-Hop culture. Here is a video preview of the upcoming events: 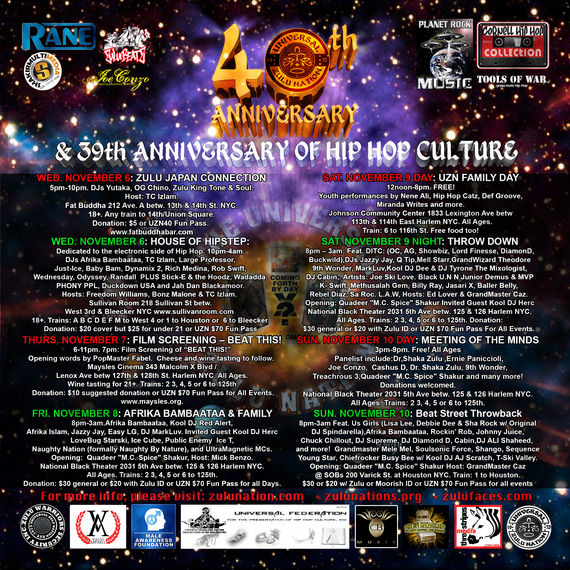