If you haven't noticed, there is a cultural shift taking place in America, and across the globe. The shift is loud, colorful, disruptive, and at times entertaining. Afropunk, the international music festival and community, is part of the alternative cultural shift taking over New York, Paris, and Atlanta. Afropunk's Jocelyn Cooper takes a moment to share its masterplan. 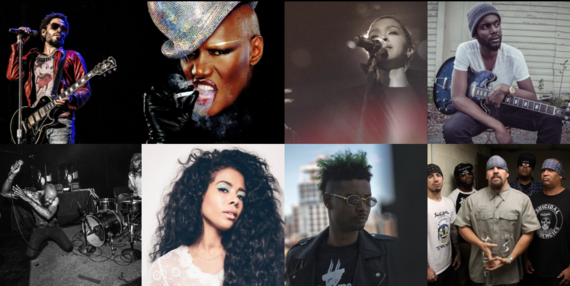 Afropunk certainly was not, in my mind from the name, sort of my world. Then I met Matthew Morgan and he started talking about Afropunk and all of the bands that were on the Afropunk.com platform. He told me there were 350 bands that were fronted by people of color and I was like there is no way there are 350 Black bands in America, and he said yes there are and they're on my site!

Then we met again and we were talking about the cultural shift and that conversation changed my life, because in my history I've been involved in major cultural shifts in Black music. I signed D'angelo many years ago, when I started my publishing company and that was the shift into neo-soul. When I was at Universal, I signed Cash Money Records and that was a big shift into southern hip hop, and getting it played on the radio to a broader general audience.

When I was having this conversation with Matthew, I was looking around and looking at all the kids on skateboards with skinny jeans. The fashion was changing. The music was changing because people had more access to figuring out what they wanted to listen to, because they bought iPods. It was a big cultural shift, and I saw it in comedy and in art. I knew I really wanted to be a part of it and thought about how I could be helpful.

Note: Afropunk was originally a creative partnership between filmmaker James Spooner and Matthew Morgan, which culminated in the award-winning documentary film Afropunk. Spooner has since left the Afropunk partnership.

Cooper: The festival itself is really about Matthew's vision for Afropunk. He is Caribbean and his definition of punk rock is very West Indian, because that is what he knew as punk, growing up in London. The idea of not narrowly defining punk and it not being the aesthetic of traditional Anglo punk, was what Matthew had always envisioned. Also creating a community and exposing young artists that were left of center, whether they were defined as a typical punk band or not. That's what he had in mind when he created the platform.

Lyons: What were some of the strategies you utilized to grow the festival?
Cooper: Putting more effort into online curation and focusing on the community having a voice. Reaching out to interesting folk to come on board and create content online. Empowering the website's Editor in Chief, Lou Constant-Desportes, to work with young people to create content for the site. The online community on Afropunk.com and all of our social platforms are reaching nine million people per week.

The next step was finding money to bring in more diverse artists. It's a big thing for us because we have a ticket for the first time. This year you can purchase a ticket to the festival or you can earn a ticket by doing community service work. It's a big thing in New York because people were so used to just walking into the festival, instead of having to really invest in our culture and invest in the community. We have to support our culture and we have to do that for ourselves.

Note: 50 percent of tickets for this year's festival have been earned by 10,000 "Afropunk Army" community service volunteers.

Lyons: How do you decide which bands will play in the festival?
Cooper: Our second largest program is the Afropunk Battle of the Bands. We had to come up with a way to make the process democratic and let the community have a real voice and say in what's programmed at the festival. The bands put their profiles and music up online and the community votes on who should be in the festival. Then those bands come and battle it out in New York, Philly, and Atlanta.

Lyons: This year the festival's headliners are Lenny Kravitz, Grace Jones, Kelis, and Lauryn Hill. What is now attracting large names to Afropunk?
Cooper: It's the community that is attracting the artists. Lenny is an old friend of mine and has been following Afropunk. We had not been in touch for years, but his daughter Zoe Kravitz, has performed at the festival. Lenny found out Matthew and I were involved in Afropunk and he freaked out and said "I want to do it! I didn't know it was done by you guys!".

For Lenny in particular, the festival is in his hometown, in Brooklyn. There is a young audience of color that I think he would really appreciate going to see him. They would not necessarily go to Radio City Music Hall, or may not have $150 to go see him, but can go and see him at Afropunk for $45 plus another 50 artists. He's actually launching his tour from the festival, so it's a big deal. It's the same with D'angelo, he came last year and played a very specific Afropunk set because he just wanted to feel the energy of the community.

Lyons: Grace Jones doesn't do a lot of shows. What did it take to get her on board?
Cooper: Outside of Jimi Hendrix, Grace Jones is one of the most iconic figures for us to think about being outside of the box, and living your life fully on your own terms. Grace has been years and years of trying. We have been asking her for years to come and perform and this year she finally said yes. To be very transparent, it's also because now we can charge a small and moderate ticket price, so we can afford for her to come and perform. Now wer'e able to pay artists. Grace has twenty people in her band and it takes a lot to move them from London and put them up. It's not a cheap endeavor.

Lyons: What led to the Afropunk festival expanding to Paris?
Cooper: Our Editor in Chief lives in Paris and we have an online audience there that wanted us to come. Afropunk Paris is very, very different from New York. There's a very African, Caribbean style and energy there. Any place that we can go and bring communities together, is where would like to take the festival. So the idea is to bring Afropunk to Brazil and Africa.

Lyons: Afropunk is also going to Atlanta?
Cooper: The lineup has been announced. We have a big audience in the South, and Atlanta is the hub of the South as far as we are concerned. My great, great grandmother was from Macon, Georgia and in the second graduating class of Spelman College, so the richness of Atlanta is important to me personally.

Lyons: Most people still feel that the South is more conservative than New York. What do you expect to happen when Afropunk hits Atlanta?
Cooper: Atlanta is one of the foundation cities of where Black alternative culture was thriving. When you think of Outkast, and Joi, all kinds of amazing stuff has and is going on in that town. Atlanta has a rich history and they have a very supportive alternative community there, even more so than New York. Atlanta is where you can go and be a freak for real, and everybody is cool with it. You can be different and people really celebrate you.

Lyons: Over the years, how has the Afropunk experience shifted who you are?
Cooper: At the core of who I am is a very DIY Afropunk focused person. I guess how it has shifted me is that I am even more dedicated than when I was working in corporate America, trying to help young people actualize their dreams. I'm even more determined.

Lauri Lyons is a photographer, author, and the Founder of NOMADS Magazine. Visit www.nomadsmagazine.com for the extended interview with Jocelyn Cooper.