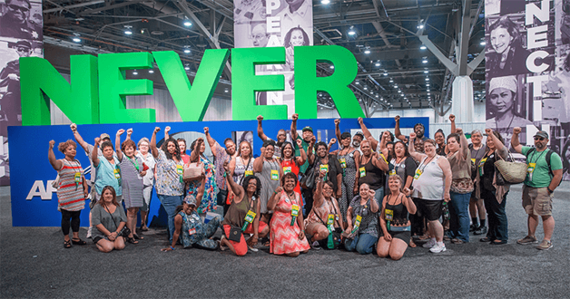 This morning in your community, someone woke up before dawn, climbed on the back of a truck and went from house to house collecting trash.

Someone else headed to a nursing job at your local hospital, on his or her feet for hours, providing hands-on care with great compassion and competence.

These are the public service workers who make our communities safe and strong. They don't do it for the fame and fortune - that's for sure. But they do it with great diligence and devotion. They never quit.

For everything they do, these men and women deserve respect and need a voice. And the American Federation of State, County and Municipal Employees (AFSCME), 1.6 million members strong, is that voice. We stand together to negotiate better wages and benefits, because fighting for every working person's future is the highest form of respect.

Beginning today in Las Vegas, AFSCME members will gather for our 42nd International Convention. And we do so at a time both of great peril and promise for public service workers and the American labor movement as a whole.

We continue to be a target for right-wing ideologues and wealthy special interests, who are attacking us with unprecedented ferocity. Their goal is not just to weaken us, but to destroy us. They used their deep pockets to bring cases all the way to the Supreme Court, where a wrong decision would have crushed long-established public sector collective bargaining rights.

The more we are threatened, the more resolve we show, the more we are determined to never quit. At the bargaining table, the ballot box and elsewhere, we have secured important victories in the last few years. We have turned back so-called "right-to-work" in Missouri. We defeated assaults on public pensions in Cincinnati and Phoenix. We helped home care workers nationwide get the overtime pay they deserve. We have exposed the threat of outsourcing, making sure taxpayers - rather than profit-hungry corporations - remain in control of public services. Tomorrow at our convention, we will host Secretary Hillary Clinton, whom AFSCME has endorsed to be the next President of the United States. The contrast between her and Republican nominee Donald Trump, could not possibly be greater. And for supporters of unions and workers' rights, there is only one logical choice.

Hillary Clinton believes the strongest economy is one that works for everyone; Donald Trump wants to lavish tax breaks on the very wealthiest Americans. She has a message of inclusion; he insults a new group of Americans seemingly every week.

Hillary Clinton is a long-time friend of working people. Meanwhile, Donald Trump refuses to negotiate a contract with maids, servers and bartenders at Trump International Hotel in Las Vegas. So while we are in town, AFSCME members will head down to his property for a rally expressing our support for those workers whose voice Trump wants to muzzle. The choice in November boils down to this: Hillary Clinton, an unstoppable champion, versus Donald Trump, an unstable charlatan.

AFSCME members are working their hearts out for Secretary Clinton because she will approach her job as we do ours - with passion and professionalism, with an unfailing commitment to serve. Together, we will never quit.