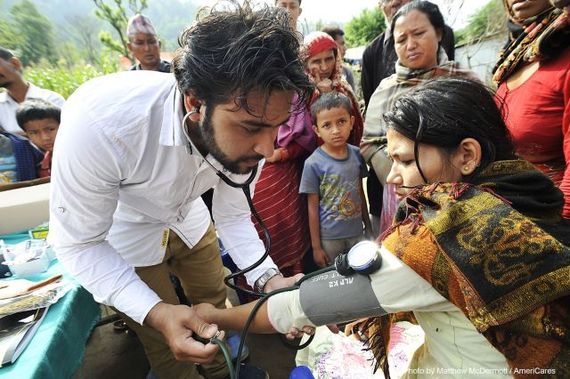 Usually, it takes Dr. Mohammed Ainnul Haque three hours to travel from Kathmandu to Arughat, the village where he was raised and his parents still live. But landslides from the powerful April 25 earthquake had closed the main highway and, five days after the quake, Dr. Haque and a medical team from AmeriCares drove eight hours on muddy side roads to reach the town. Carrying medicine and medical supplies, the team hoped to provide care to survivors. Arughat is in Dhading District, one of the hardest hit.

When they arrived, Dr. Haque was stunned. His parents had told him they were fine after the earthquake and that he did not need him to come home. But walking down the main street, he found every building damaged or completely destroyed. "It was the second largest commercial center in Dhading and Gorkha districts and now it's gone," he said in disbelief. When Dr. Haque reached his home, his heart dropped: His parents, once comfortably middle class, were living in a tent near the rubble that had been their family home. The couple who had sent him to medical school were left with nothing - not even cooking utensils.

It was obvious that Dr. Haque's parents had sought to protect their son from the truth. Dr. Swati Jha, an AmeriCares doctor on the team, has worked in disasters before but even she was taken aback. "We were prepared for the injuries but not the sorrow," she says.

The team met with local leaders in the gathering dusk, learned the village clinic had run out of medicine, and made a plan to run a mobile medical clinic. The next morning, Dr. Haque, Dr. Jha and three nurses set up a makeshift clinic under trees. As word of the clinic spread, residents began lining up to receive care - survivors had lacerations and broken bones; mothers carried children who had been rescued from the rubble. By the end of the day 375 patients received treatment.

As Dr. Haque worked, the severity of the damage began to sink in. The chatter among patients was not about how long it would take to recover, but if they would ever rebuild. Wounds would heal, broken bones would knit, but the town that this doctor called home might never rise again.

Perhaps the first days are the easy part - the initial response when medicine and bandages are what's needed. More difficult are the months and years that follow. Not just the monsoon rains that have everyone in Nepal working hard to put roofs, floors and supplies in place, but the repair of communities that are broken in myriad ways.

For example, more than 1,000 clinics are destroyed or damaged, including the one in Arughat. They will take years to rebuild, and it will require a concerted effort of the government, multilateral organizations and aid organizations, including AmeriCares.

Just as important are people's hearts and minds. The anxiety from this earthquake and its many aftershocks is already causing stomach aches and sleeplessness. In the months and years ahead, stress could damage individuals and families. When an earthquake wipes hometowns off maps, psychosocial care is critical and is always part of a long-term, comprehensive response.

As the AmeriCares team retraced the muddy route to Kathmandu the next day to organize more medical camps in devastated areas, Dr. Haque stayed behind. To ease his personal pain and loss, he needed a dose of medicine that only his parents could deliver.

Michael J. Nyenhuis is President and CEO of AmeriCares, an emergency response and global health organization that has delivered more than $12 billion in humanitarian aid to 164 countries.