"They Took the Cash, Now Watch Them Get Smashed," read the invite from a clutch of Washington Post reporters hoping to fete 100-plus newsroom cronies who took what may be the sweetest get-the-hell-out retirement deal in American journalism today.

The vibe in that human crush Friday night at Stoney's, a bar that had
tarted itself up nicely since moving several blocks north of the Post, was
seriously schizo.

"It sucks," lamented Style pop music critic Josh du Lac, who is staying put. "So many people I admire are leaving."

"I'm so happy," exulted Joe Elbert, former assistant managing editor for
photo who's got a hot Monday afternoon movie date with his wife, Kathy
Legg, a newly-ex art director, "because we don't have to go to work."

"This was the most emotional farewell I can remember. We are grieving not just for the really good people we are losing but the Post as we knew it," said Roxanne Roberts, co-author of the Reliable Source.

Barkeeps in the upstairs private room could barely keep up with shouted orders for alcohol (our hosts provided chicken wings and other greasy treats, but seeing as how this was a mob of emotional newsies, they judiciously arranged a cash bar ). David Broder, who at age 78 took the buyout but got one of the few coveted contracts to keep writing, bought me a drink as his wife, Ann, mused, "I can't tell you how many elections he said to me, 'this is my last presidential campaign.''"


The noise level made real conversation impossible, but that was not the point of this gathering, where from 6:30 pm until after midnight, the smart-ass journalist's facade we wear so casually gave way to unabashed mush in a crowd that included those leaving--Tom Ricks, Sue Schmidt, Rick Weiss, Don Podesta and Allan Lengel, and those remaining-- Dana Milbank, Liz Seymour, John Pancake, Ann Hull and Amy Argetsinger. The question, "what are you doing next?" was asked with uncharacteristic delicacy.

The week leading up to Friday's mass exodus was predictably
unsettling. Dozens of emptied desks on the fourth and fifth floor newsrooms
suggested plague, or a neutron bomb. The retirement of the women who ran
Book World, Home, Travel and Style (editor Deb Heard stays through

December) leaves only five gyno-American section heads: Finance, Health, Weekend, Real Estate and Sunday Source. A drastic loss of copy editors, and the "two touch" rule
cutting the number of times stories be read before they appear in print,
has generated fear of an enormous Corrections box and grim jokes among the
reflexively-conscientious ones still left of negative job evaluations for
"inappropriate touching."

The week's farewell ceremonies were, understandably, long on sentiment,

gallows humor and enough cake to induce insulin shock. (Props to the Food
Section for serving divine vegan confections, and on hip porcelain rather
than tacky paper plates.)

Company and the former Post publisher, stopped by my still-cluttered desk
while making his send-off rounds. Our sweetly awkward conversation quickly
devolved into how hard it is to get rid of books. People, well, that's
another story.

By afternoon, managing editor Phil Bennett had appeared on his own

"You all right?" he asked as I rushed to file my last expense report.

"You've been a huge part of this place," he said, shaking my hand.

Then he was gone, the entire exchange having been executed in under 10
seconds.

Today begins what I call my "Katharine Weymouth Fellowship," and what
the Post calls a "voluntary retirement incentive package." It was announced a
scant month after the new publisher took over in February. This was her
first buyout, but the paper's third in five years, owing to declining
circulation and tanking ad revenue.

In return for leaving, I got an adequate chunk of cash, an inadequate
pension and a shot at re-invention. (Insert cheery boilerplate here...."I
look forward to this new chapter of my life. I have several projects and a
book to finish blah blah blah.")

I thought seriously about staying until I read one ominous sentence
in Weymouth's initial buyout memo in March: "I am sorry to say we cannot
rule out layoffs." My decision was further goosed by two other factors:
the Post has a very fat pension fund and most other distressed newspapers
were imposing brutal layoffs or giving pitiful severance.

Still, the actual act of leaving was wrenching. I came here in 1995
after 21 years covering politics out of the Orlando Sentinel's Washington
Bureau. I had quit to sling dishy gossip for the Reliable Source with
fellow Stylista Ann Gerhart, and for more than three years, we exposed the

Some of our best sources were in the building, including former publisher
Katharine Graham herself, a formidable gossip and Weymouth's grandmother. I
broke the Big Brotherish story that Ken Starr had subpoenaed Monica
Lewinsky's credit card receipts from the bookstore where she'd bought gifts
for her president, and I shot enough photos of Fred Thompson's ever-

changing arm candy to create a "fondness for blondness" gallery of his
women.

But by 1999, I'd had it with bad behavior, bad divorces and bad
facelifts, so I joined the Home
Section to focus on design, architecture, antiques and 21st-century
manners. I couldn't resist leading one story with the feloniously-hackneyed "It was a dark and stormy night," because it had indeed been
monsooning when California uber-architect Richard Neutra scouted a site for

what would be his last residential project, in DC of all places. My
favorite front-pager? The disgusting mold infestation at the brand-new,
celeb-heavy Ritz Carlton condos a short stroll from the White House.
Litigation drags on, of course.

I do not. On Thursday I turned in my last print piece and co-hosted
my final "Home Front" web chat with my colleague Jura Koncius, who is

staying. I chose not to sign off by revealing our reaction to a
cyber-moment of years past, the first time someone asked what color to
paint a living room....in Texas. "How the f--- do we know," is what we
shrieked to each other. Tasteful taupe, or maybe it was silvery sage, was
what we posted. Over lunch earlier that week, we had recapped our year doing hilarious,
home-themed broadcasts on that doomed experiment known as Washington Post
Radio, which died before we could get ourselves syndicated or pod-cast.
Now, in the most tumultuous election year I can recall, I hope to return
to my roots and write about more than sofas and drapes, organic cleaning
products and decluttering strategies. Of course, today's political
dispatches would be nicely spiked with true gossip, interior decor porn,
fashion and food.

In my new life, I am now allowed to call myself a Post Partum, a term
coined by an earlier class of departees. I don't think I will. Former
Washington Post Staff Writer will do just fine. 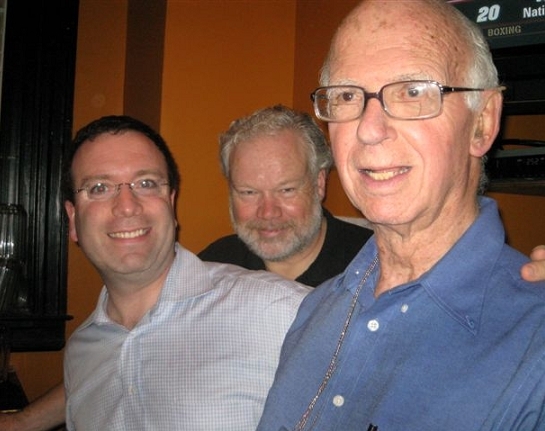 Ccolumnist Dana Milbank, left, who is staying at the Post, with defense writer Tom Ricks, center and political columnist David Broder, right, who both took the buyout. 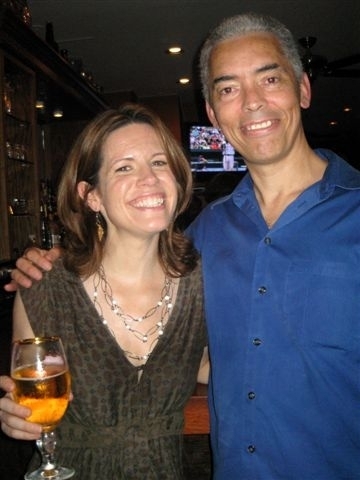 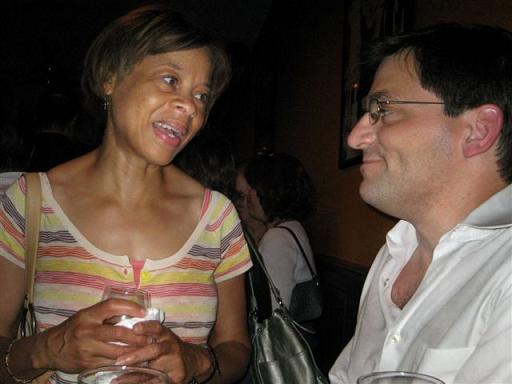 Style Editor Deb Heard, who took the buyout but stays until December, with Peter Baker, who went to the New York Times from the Post after his wife, Post National Editor Susan Glasser, was removed from her job. 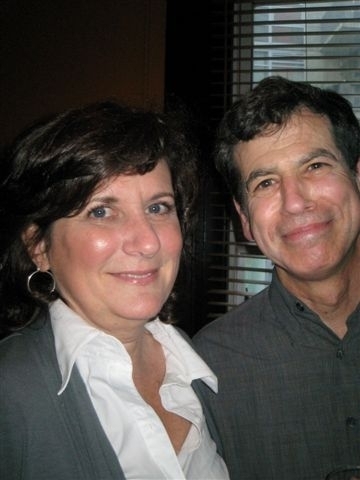 Sue Schmidt ,who took the buyout and is now at the Wall Street Journal, with Rick Weiss, a science writer who also took it and will join the Center for American Progress.