Well, here we are: January 7, 2016. One year after the Charlie Hebdo attacks, the killing of police officers, the Dammartin-en-Goële and Porte de Vincennes sieges. There were seventeen victims, many injuries, any many shattered lives. How do we honor the memory without sinking into alarm, anger and sadness once again?

I'm not saying that there were no problems before January 7, 2015. But like many of us, I lived in France believing that we were all safe in a country of secularism, schoolboy jokes, insolence, freedom of expression, and justice.

As soon as January 8, we started talking about the attacks in class-- I teach at a high school in the Paris suburbs. The shock hadn't even subsided, and we were all mourning with the families of the victims. On January 8, incomprehension was the dominant feeling among my eleventh grade literature students. The minute of silence went by smoothly.

On January 11, like a lot of French people and citizens of the world, I was on the street, proclaiming my commitment to the values that define our nation. However, I overheard unpleasant remarks. Was it just me, or were people keeping an eye out for youth from the suburbs --Muslims, to be exact-- who may or may not have been at the rally?

"I prepared a set of readings so that my students would gradually think about the values of the school and of France."

As of January 12, conversations were flowing more freely in class. The discourse had changed. The conversations were a lot more heated. There were many questions at the time: What will be gained from this refusal to "be Charlie"? Was there some kind of gap? What position should I take, as an adult, teacher, or mother? How do I respond to this refusal? How do I respond when my students suddenly feel blamed, and that they have to explain themselves, to declare their positions, to declare themselves to be Muslims, yes...but "moderate" Muslims?

I didn't know how to respond, and I asked myself the following question: When you have faith, must it be "moderate"? A sense of déjà vu was in the air.

At the time, I felt like a disappointment. It happened when people said that "the school had failed" or that the mother of one of my students was spat on in the street for wearing a headscarf. Even worse, nauseating conspiracy theories suddenly resurfaced. There were some silly conversations in class, as there were elsewhere, about the hue of rearview mirrors, about the presence of an ID card, about the absence of blood, bodies, etc.

At some point, I could no longer deal with it, and I gave in to authoritarianism. We ended it all. Back to the novels. "It's not everything, but you all are taking the French baccalaureate at the end of the year." But I had not said my last word. I will not surrender, I thought. 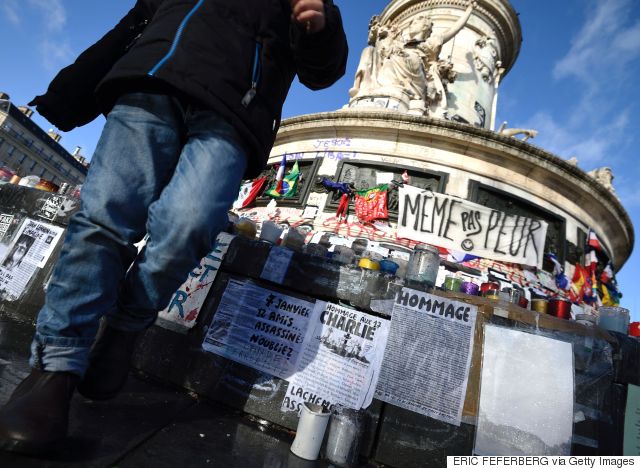 A picture taken on January 7, 2016 shows a man walking by a makeshift memorial for the victims of Paris attacks at the Place de la Republique in Paris. (Eric Feferberg/AFP/Getty Images)Thanks to an offer I received, I started to write a book. At first, the idea was very simple: imagine that you are a little mouse tucked away in my pocket, accompanying me on my journey as a teacher. Come with me to class and to my office; take a journey with me through twenty years in the life of a teacher in the Parisian suburbs. It would be nothing like your own student experience. Nothing like TV show clichés or armchair debates.

During the project, other ideas were grafted over this original idea: teenagers for dummies, defending literature and the arts, as well as my response in my role as a teacher to the trauma that followed the attacks.

Like the rest of my colleagues, I did my fair share of extra-curricular activities: I participated in training courses set up by my superiors, joined round table discussions led by organizations or various authorities, as well as discussion forums, symposiums, and conferences.

Therefore, I was well-prepared to assign literary works that addressed the problems we were all facing to my eleventh grade literature class.

There was for example Étienne de La Boétie, who addressed questions such as: What is tyranny? How is it established and how does a tyrant stay in power? How do the people, by failing to practice "civil disobedience," become complicit with the tyrant? There was Aristotle, Montaigne, Voltaire, La Fontaine, Hugo, Zola, among many others, who helped us consider the following questions: What is Democracy? How have the great authors condemned injustice? How did they propose to overcome it? There was also Ionesco: How can we explain the massification process, or in other words, how can people lose their individuality in favor of populism or extremism? And there was Daumier, who mocks the excessive use of power in the 19th century! And Rimbaud, a progressive poet! Baudelaire, champion of modernity! And then Camus: What is a hero? How does killing a human being place the individual outside of humanity?

I prepared a set of readings so that my students would gradually think about the values of the school and of France.

Watch what brings us together. Read and re-read. Try to understand. In June, when you leave the benches of my class, I hope that you will be able to think for yourself, and that one day, you will make good use of this education. Learn to make choices.

In September 2015, I was very happy to find my students in twelfth grade literature. We all started the year off smoothly.

"I have faith in the future generation that my students belongs to. They've proved to me that they could learn: they are the future French citizens."

Fear broke out everywhere. It was like Russian Roulette. Who will be next? There were those who felt so much empathy for the victims and for their loved ones that they burst into tears. Other people admitted: "I don't feel anything. Am I a monster?" Because numbness becomes a tactic of self-defense. Keep a distance at all costs.

I responded to them as simply as I could: "There were no victims among your close friends or family? You're lucky!" At other times, I explained that it isn't necessarily the person crying the loudest at a funeral who feels the deepest sadness.

Other students suffered from anxiety attacks. The word "war" was everywhere. And then there were the rebels: "I'm 17 years old, I want to live happily, and to worry about my PlayStation, YouTube and Instagram. To hell with it! When will this fighting over religious or political reasons end? Can't we all just live in peace?"

As we engaged in more conversations, I saw that they had grown up and matured. Now, they check to see that what they're reading is coming from a reliable journalistic source. Now, they demand the right to be integrated into this society of which they were so skeptical, these kids from the suburbs, even if it causes them some distress. They demand to have a "normal", "peaceful" life. They don't have grand ambitions, but they want their families to be proud of them, they want a partner to greet them at the door, a child to one day call them "mom" or "dad," and they want to bring home a salary every month. Very humble ambitions. They just want to coexist, and have a life that's similar to everyone else's.

So whatever the self-proclaimed Oracles might claim, I have faith in the future generation that my students belongs to. They've proved to me that they could learn: they are the future French citizens.

This post was originally published on HuffPost France. It has been translated into English and edited for clarity.

Literature teacher in the Paris suburbs