LE BOURGET, France -- Leaders from around the world made history Saturday, achieving what many thought was impossible -- an unprecedented international agreement to limit global warming. The "Paris effect" is already being felt around the world, analysts say, opening the door for a new era of green energy. 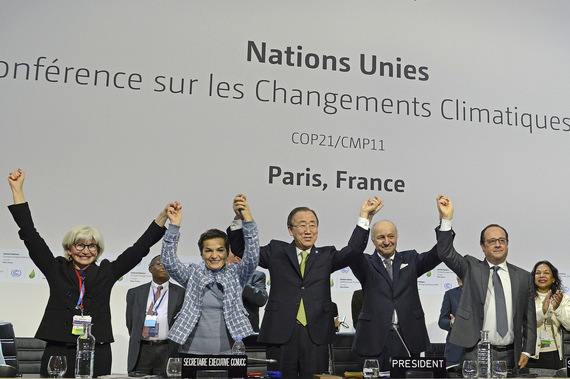 Leaders of the COP21 climate talks celebrate after an international agreement was reached on Saturday, December 12.

After two weeks of intense debate and little sleep for delegates from 196 countries, French Foreign Minister Laurent Fabius banged the ceremonial green gavel Saturday evening, adopting the ambitious document put forth by the United Nations' committee earlier in the day. It endeavors to limit warming to less than two degrees Celsius above pre-industrial levels and define the path to a more sustainable future for the planet.

The Paris Agreement will, for the first time in history, curb dangerous emissions of greenhouse gases at a global scale and ensure that developing countries will be able to cope with the impacts and financial burdens of a warming climate. Ultimately, the parties hope, rich and poor countries alike will transition to a cleaner energy future.

"This is a tremendous victory for all of our citizens ... It's a victory for all of the planet and for future generations," said Secretary of State John Kerry, who was all smiles in the hours leading up to the final approval, having played a critical role throughout the talks. "The world has come together around an agreement that will empower us to chart a new path for our planet."

Delegates celebrated their accomplishment calling it a "major landmark" agreement and a "marvelous act" while at the same time recognizing that there is still much work to do when it comes to implementing the document.

Quoting Nelson Mandela, South African Minister for Environmental Affairs Edna Molewa told negotiators, "I can only rest for a moment, for with freedom comes responsibilities, and I dare not linger, for my long walk is not ended."

Most delegates emerging from the negotiation room were optimistic. As they greeted the reporters standing outside, there were cheers, smiles, thumbs up, hugs and even a few tears.

"This is an historic agreement and this gives a new hope to the future generation that the world will act collectively and give them a better life for their future," said Prakash Javadekar, India's Minister of Environment. "And today I hope that the commitments made are fulfilled."

Small island nations also welcomed the agreement. Climate change poses an existential threat to these countries as uncurbed global warming and rising seas could engulf the islands they call home. But the Paris Agreement, which called on countries to limit global warming to two degrees Celsius above pre-industrial levels, also recognized the importance of efforts towards limiting global warming to 1.5 degrees, a temperature increase that island nations say would allow them to survive.

One young woman, the youngest speaker at the historic gathering, symbolized what's at stake for one of these vulnerable nations, the Marshall Islands.

After the climate deal was adopted, the Marshallese delegation invited 18-year-old Selina Neirok Leem to speak before the UN, and share the impact of climate change on her home nation. If sea-level rise continued unabated, she said, her country would face devastating harm. With the agreement, "my ancestors, my grandparents graves and everyone who's buried in my country are now saved," Leem said in a later interview. "The island is going to be there."

Still, there were other communities who felt cut out entirely from the talks. Mentions of human rights -- which includes such diverse constituents as women, indigenous peoples, those with disabilities, the elderly and children, among others -- were whittled down with each draft.

Moreover, issues that affect these marginalized groups more than others were given short shrift, advocates felt. One sticking point of the agreement was the inclusion of loss and damage -- financing for developing countries hit hard by circumstance they didn't create. These climate-intensified natural disasters -- droughts, floods, tropical storms -- disproportionately affect women who often perish in disasters at much higher rates than men..

Although the agreement includes a section on loss and damage, it does not provide any financing for it. In essence, omissions like these acknowledge the disproportionate burden on certain groups without taking any action toward relieving the burden.

"Did we read the same agreement?" wondered Liane Schalatek, as she sat in the plenary room, reflecting on the widespread praise from delegates. Schalatek is the associate director of the Washington office of the Heinrich Böll Stiftung, a German foundation dedicated to social and environmental issues. "For whom do you want to save the environment?" she asked. "Do you want to have a planet that's unlivable for the most vulnerable?"

She contended that the deal could have gone much farther in providing for those who suffer the most from climate change.

Hours earlier in Paris, with the Arc de Triomphe at their backs and the business district of La Défense gleaming in the distance ahead, thousands of demonstrators held "red lines" of fabric and called for the international negotiators to sign an agreement that would limit global warming to two degrees Celsius or less. They did, officially committing to two degrees and aspiring to 1.5 degrees within the text.

As sound collages of animal noises and ticking clocks blared loudly from modified megaphones, crowds of supporters bounced silver balloons striped with more red lines and women dressed as "climate angels" led the crowd through the city and toward the Eiffel Tower.

March organizers from 350.org and its partners planned the D12 action despite the Emergency Law still in effect banning such events, forcing a standoff with Paris authorities. However the city yielded hours before the march's scheduled departure, dispatching columns of police to manage the peaceful crowd. While some demonstrators expressed support for the UN Conference of the Parties (COP21) in the final phase of negotiations, many marchers pushed for more radical solutions.

"COP21 is not a solution! What we need is a revolution!" called members of the Nouveau Parti Anticapitaliste (New Anticapitalist Party). Others carried signs demanding "climate justice" and red tulips commemorating victims of climate-related disasters. Two activists unfurled a long red banner atop a building under construction overlooking the street as people cheered and police looked on, shaking their heads.

And as world leaders congratulated one another with back slaps and hugs, those on the streets were less impressed. Caroline Gaujard came from outside Paris, wearing a giant red scarf tied to her lapel. She called COP21 a "big scam."

"Governments are nowhere near ready to do anything against climate change because that would mean cutting profits of big companies," she said.

Samuel Mondlane, representing Friends of the Earth Mozambique, said, "This is a historic moment, but as we don't agree with what the text says so far, I mean it's very weak," he said. "We are actually going to burn the world, and get roasted."

And Ton van Kooten of the Netherlands marched with his family, and balanced the limits of the agreement with the urgency of the present moment.

"I can hardly believe that the conference is going to give us what we need," he said. "But it's important, it's now or never."