Over the weekend, the Cromnibus budget deal passed the Senate by a 56-40 margin after narrow approval by the House. The outcome is a win for big corporations and wealthy campaign donors, and a huge letdown for 99 percent of Americans, who once again have been shafted by back room negotiations and legislation written to favor the rich and powerful.

There's a lot to make ordinary citizens sick about the Cromnibus. Republicans used the legislation as an end-of-year Trojan Horse to pass numerous stealth provisions that benefit the few at the expense of the many. Two of the worst are rolling back Dodd-Frank financial regulations so banks can once again gamble with money insured by taxpayers, which re-opens the door to more bank bailouts; and further gutting campaign finance reform by letting rich donors give up to $1.5 million a year to political parties, ten times the current limit.

But the one Cromnibus secret that wasn't reported anywhere in the media until after the bill cleared both the House and Senate was that the budget deal grants members of Congress a lucrative new perk: the ability for each member to spend $1000 of our tax dollars per month on a luxury car allowance. 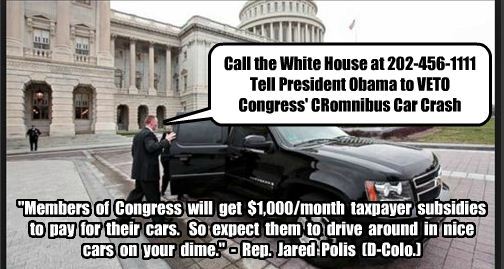 Democratic Rep. Jared Polis of Colorado was the first to alert the public to this impending perk, when he posted about it on Facebook last Wednesday, the day after House Republican leaders filed the legislation. The relevant language was hidden on page 982 of the 1,603-page bill:

"None of the funds made available in this Act may be used by the Chief Administrative Officer of the House of Representatives to make any payments from any Members' Representational Allowance for the leasing of a vehicle, excluding mobile district offices, in an aggregate amount that exceeds $1,000 for the vehicle in any month."

At a time when U.S. families are finally getting their feet under them again after our economy's long climb back from the Great Recession, the audacity of Congress to vote itself a luxury perk like this is breathtaking. It passed only because it was buried in an enormous spending bill, with no public discussion or media coverage.

President Obama has said he will sign the Cromnibus, but he deserves to hear the American people's opinions about it. Act right now to tell President Obama to veto this deal, and send it back to Congress for an honest debate over its Congressional luxury car cash and many other unacceptable provisions. You can call the White House at 202-456-1111, or send him a quick e-mail using this tool powered by Represent.Us: 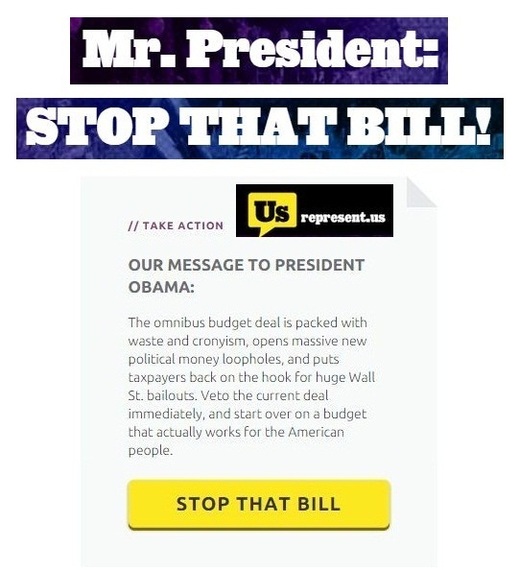 The silver lining in this battle was that it showed Sen. Elizabeth Warren (D-Mass.) is willing to take on Wall Street and the super wealthy when it comes to fighting for the rest of us. The Cromnibus fight boosted her national profile overnight, and cemented her status as the Democrat who could most likely wrest the Democratic nomination from Hillary Clinton in 2016. 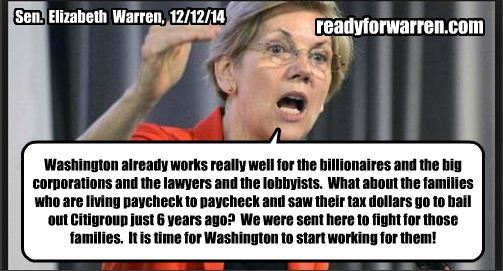 Where was Hillary when the Cromnibus reared its head? As Politico made clear, "Clinton has not commented on the $1.1 trillion spending bill, which Warren claims will undo (financial) reforms made under the Dodd-Frank law."

Other Cromnibus provisions that advance the GOP's agenda include allowing corporations to cut up to ten million workers' pensions; slashing $300 million from housing assistance to the homeless; reducing the EPA's budget by $60 million, which will lead to massive cutbacks and layoffs; and cutting $300 million from grants to low-income students.

It's good for the rich, the powerful, and Washington, D.C.'s luxury car rental companies. But the Cromnibus is bad for America, and President Obama needs to step up with his veto pen and do the right thing.