This is the twenty-ninth installment in HuffPost Gay Voices Associate Editor JamesMichael Nichols' 30-part series "After Dark: NYC Nightlife Today And Days Past" that examines the state of New York nightlife in the modern day, as well as the development and production of nightlife over the past several decades. Each featured individual in this series currently serves as a prominent person in the New York nightlife community or has made important contributions in the past that have sustained long-lasting impacts.

Over the past several years you and your parties have become iconic in the NYC nightlife scene. What did your journey to becoming such a fixture in nightlife entail?
Ladyfag: I came to New York from Canada over eight years ago. Previously, I sold vintage clothing and antiques for nearly a decade and was about to open my own store so I came here for three months as my last hurrah... and never left! I didn't know anyone in the city, so I used to go by myself to all of the parties of the moment: Hiro, APT, Happy Valley. I started doing an impromptu show in the middle of the dance floor at one of these parties and Kenny Kenny came up and asked me to dance for him at Happy Valley. When I got out of the cage he said, "You're hired! Now come downstairs everyone wants to meet you!" It snowballed from there and I started hosting parties four or five nights a week... and it's been an ever-changing journey since.

You came up right after nightlife began to experience a resurgence following years of policing and regulation in New York City. How have you seen it grow, evolve and change over the past eight years?
Nightlife always goes in waves. I had just arrived and I remember thinking Happy Valley was so incredible -- I was new to the city and just mesmerized by all of these amazing characters dressed up week after week. The club itself was designed by Jeremy Scott and it was so over the top... now, sadly, it's condos. There's been so many moments where suddenly a new party really takes off and it creates a ripple effect because it gets people excited, and then they want to go out even more, and then new parties start to pop up and suddenly New York is having a moment again... and again... and again... 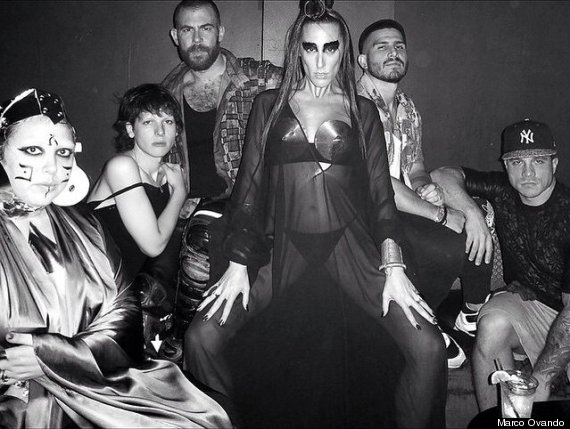 Many have claimed that you are reviving the "golden days" of nightlife through your massive parties SHADE and Holy Mountain. What does your vision for these events entail?
There will always be "golden days" of nightlife. I didn't invent the wheel, and promoters who talk about themselves as though they're some type of gods make me laugh. Bringing people together to share an experience is what I love to do. For me it's about throwing parties that I would want to go to myself. New York apartments are generally small by nature and people need a space to connect and hang out. My weekly 11:11 party is very much that -- my home where everyone is invited.

Holy Mountain is my new monthly [event], and truly is mountain of a party! It's a huge labyrinth where there are so many different rooms with different vibes you can explore. The venue is the old Mr. Black space that I used to work at. They only used two rooms, and I thought how amazing would it be to have four different styles of music and energies -- pretty much like having four parties under one roof. We were inspired by Holy Mountain, visually, but it turned out that even putting the visual themes in motion set it off in people's imaginations -- and the energy that fuels the party is pretty magical.

I throw SHADE with my partner Seva Granik. We basically convert raw warehouse spaces into full-blown nightclubs for just one night, so it's sort of a beast that takes a few months to plan out and build. There were lots of DIY warehouse parties, but there was never the mix of a full-blown club experiences with amazing sound systems and over the top light shows. They're highly produced but still have a raw, anything-goes feel. Every SHADE has a visual and musical theme, usually tied to club culture. We did an homage to Detroit called Detropia, which was a dystopian vision of Detroit complete with smashed car sculptures and Detroit techno. We've done a coast to coast and brought in DJs from our L.A. nightlife family. There aren't really any people in our scene doing warehouse parties on this scale, and it's probably because if you even tried to do it once you wouldn't do it again [laughs]. We max out our credit cards and we have a team of about a dozen people who work around the clock. My production manager actually moves in with me the week before because we take turns sleeping! 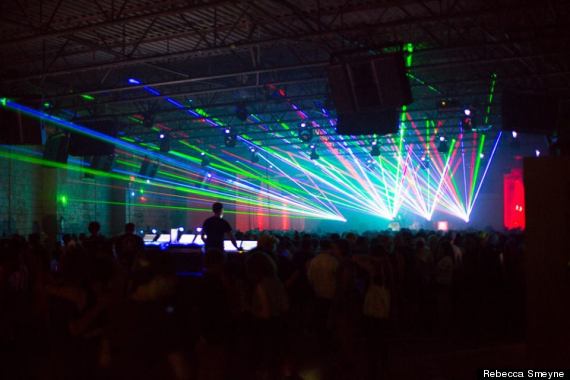 I couldn't do it without my partner Seva. He comes from a production background and he's been doing DIY shows in Brooklyn for over a decade. We both play our roles; we split things up and divide and conquer the beast to make it happen. But they say if you build it they will come... and thousands of kids come out. It's kind of crazy because we change the location almost every time, and people have no idea where it will be until the day of. We feel a certain responsibility at this point to live up to the SHADE reputation, so we're always trying to outdo the last one. If these kids are going to come out to the middle of industrial nowhere because it's SHADE, then we sure as hell better give them an experience!

Several people featured in "After Dark" have discussed how they wish nightlife would become more mixed and less segregated. Your parties seem to embody this philosophy by bringing together different scenes to create one massive fantasy. Why is this important to you?
It's a common complaint, and understandably so. It's actually quite hard to find the right balance and, unfortunately, there is no exact formula to make it happen. Obviously the best parties are mixed and have a variety of people, but there has to be enough of every sub-group so that everyone can comfortably call it their own. My parties generally tend to be quite mixed -- not only in terms of gender and sexuality, but in age, professions, size, colors -- it's a serious melting pot. In a way, that's a reflection of my life and my friends. I believe in the "everyone is welcome" philosophy. Well, maybe not everyone... young squealing girls need not apply [laughs]. But in my defense, if that seems rude, those girls usually end up puking in the club. 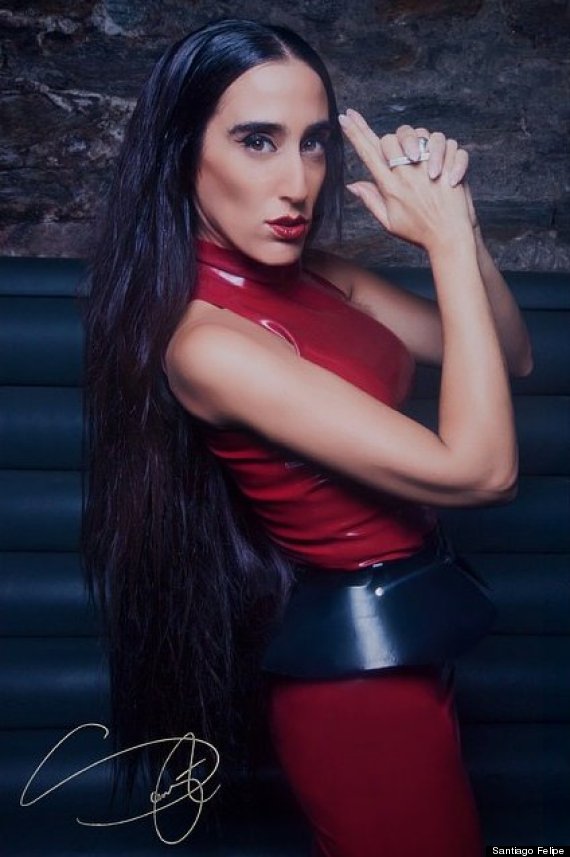 You're involved in the fashion world. I'd like to hear your perspective surrounding nightlife as an intersection of fashion, music, art -- how does it operate as a source of cultural production for these communities?
Nightlife is a breeding ground for creativity, and a source for so much inspiration to designers. When you think of some of the most esteemed designers like Galliano, Mugler, Riccardo Tisci and McQueen -- they were all "club kids." That's where it all starts!

As far as fashion, a nightclub is the real runway. It's like this big stage where kids can express themselves through fashion. I mean, when was the last time you got inspired walking around Bloomingdale's? [laughs]

A number of young creatives coming up through nightlife referenced you as someone who recognized their potential and helped shape their place in the scene, including gage of the boone, La'Fem Ladosha and Domonique Echeverria. Why is it important to you to elevate the work of up-and-coming artists through your parties?
That's really sweet to hear. I'd love to take credit for my parties, but the truth is I can't do it alone. It really is a collective of people I work with that make the parties what they are.

I have so much love for Domonique, gage and La'fem Ladosha. I'm a big fan of theirs and so many of these young kids that are such creative creatures. They bring so much to New York already and have only just started. After awhile you fall into patterns, but I remember how everything was so exciting when I first started and these kids have so much energy and fresh desires and ambitions to bring their passions to the city. The city can be welcoming, but it's still tough when you start out. They don't need my help to shine -- they were already stars waiting to be discovered.

They just need people to believe in them and create platforms for them to shine on.

What are your current parties and gigs? What does the future hold for Ladyfag?
This past weekend was pretty special for 11:11 as it was our two year anniversary! Which is longer then a lot of people's relationships in NYC [laughs]. The next Holy Mountain is Dec. 20 so we're going to get into the holiday spirit.

Then I guess I'll announce it here first... SHADE is back for New Years Eve! Except we're not celebrating 2015 -- we're celebrating 2084... you asked me what the futures hold for me, but we're about to bring the future to nightlife right now.

As an iconic nightlife figure who brings people together and curates other-worldly experiences for the public -- at it's foundation, what is nightlife for you? What makes it so special and worthwhile?
People are always hoping that one day they'll die peacefully in their sleep... I'd be pretty happy dying of old age while still up in a nightclub. I live for nightlife; there are so many times where things go wrong and sometimes the city puts so many obstacles in your way and you ask yourself, "why the hell am I doing this?! I could make my life so much easier by doing something else." But there are those moments where you look out at the dance floor and everything is just right. There's this inexplicable wave of energy and joy going through the room and you look out and all the problems disappear... it's those magic moments that keep you going. Sometimes I look through all of the old photos from my parties and see so many friends and New York characters having the time of their lives and think: I make people happy for a living. What more could I possibly want to be doing in life?

Missed the previous installments in this series? Check out the slideshow below. 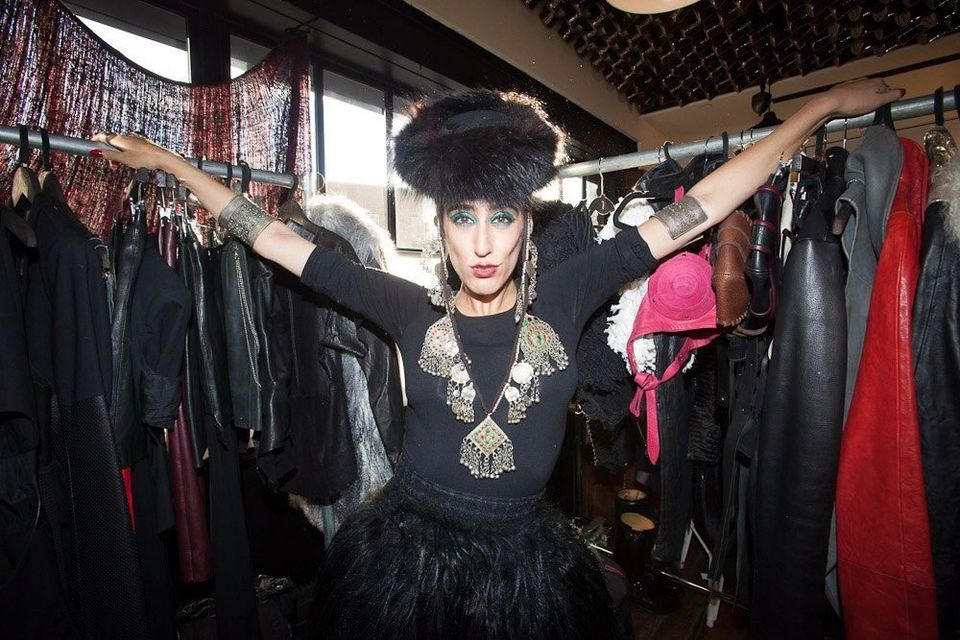