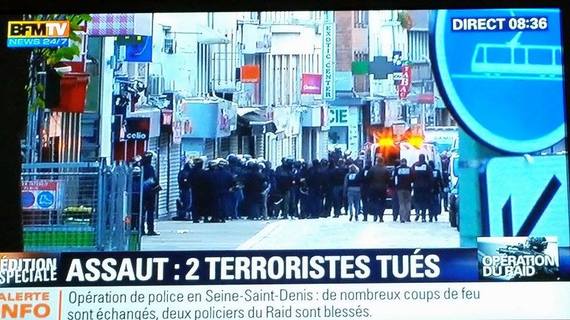 I was in the US at the time of 9/11 and now here in France after ‪the Paris‬ attacks, so I can compare like one naturally does. ‬‬‬‬‬

What is refreshingly different about the French compared to the Americans is their lack of the need to turn every occasion into a homecoming parade. They are so not Ra Ra! Part of it has to do with the sensible TV coverage. Part of it has to do with the fact that they are perhaps, for the most part, better educated. The fact that Muslims are the biggest minority also helps. The French know Islam better, they've had a history of contact with Muslims since before the battle of Poitier (732 AD).

No one really even talks about Paris anymore here at the clinic. There may be a minute's silence at lunch today. But there are no ribbons, no candles, no endless talking a little loud, so everyone can hear about the Muslim or the immigrant menace. They are too sophisticated for that-- while they may bitch about social security being burdened by foreigners they know the difference between me and the Algerian lady, and the Jihadists. They blessedly know a Sikh from a Muslim.

But there is something else. Last night a male anchor-come-poet reading Apollinaire said it, "what is wrong with fear, with sadness, let us reclaim fear." It occurred to me that what saves this culture from that macho, 'let's go get them' attitude, from that constant need to be on top of things, is its relative effeminacy! In the US, everyone is forced to be 'positive' even in the most negative of situations. It's veritably tiring this gung-ho attitude about everything. Americans are so busy being positive they don't know how to mourn. How to sink into melancholy.

Some things need time to digest, to ponder, to solve. Like my diet life here is arranged into portions, chewed slowly and digested well. No woofing down of experiences here, no throwing up of hate, no loud burping of the indigestible sadness of the world.

As I write this, on the Television they are discussing a big police raid in Saint-Denis neighborhood of Paris. Loud machine gun fire and explosions are heard, even though this the biggest story here the main networks don't carry the raid, only the cable ones. No one works much more than they have to here, where those like Fox News and CNN seem to fan hysteria, the French simply report it when it's time to report it at work.

The poor French anchorman and woman are still debating whether it is "possible to negotiate with this kind of profile?" I hear myself thinking, "NO!" even though I don't even believe in capital punishment. But I have kids the same age as some of the victims at Bataclan. Kids who will be flying through airports, going to rock concerts and football games, and who will have dinner in sidewalk brasseries -- that is a pretty big common denominator with petrified mom's around the world. A veritable United Nations of mom's fearful of terrorists are happy to see these terrorists eliminated.

Despite my fear and anger, I'm very glad to be here, where this tragedy is being treated with the deference due to such an occasion, I'm glad to be somewhere where a person can at least express the point of view of the mother of the girl who just blew herself up in the police raid in Saint-Denis: how do we stop these children from turning to extremism? That mom too is one of our nation, one of our nation of petrified mom's around the world.