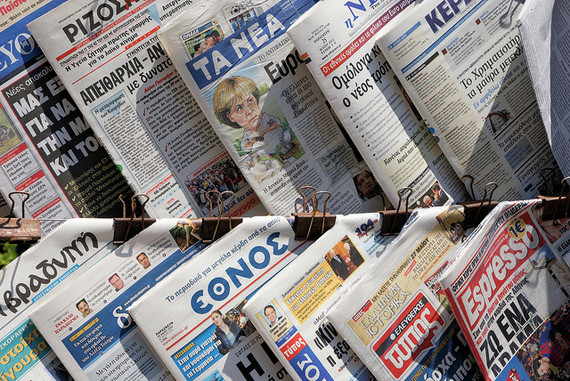 I've been reading The 4 Hour Work Week by Tim Ferriss, and this passage about reading the news stuck out to me:

"I hope you're sitting down. Take that sandwich out of your mouth so you don't choke. Cover the baby's ears. I'm going to tell you something that upsets a lot of people. I never watch the news and have bought one single newspaper in the last five years, in Stansted Airport in London, and only because it gave me a discount on a Diet Pepsi. I would claim to be Amish, but last time I checked, Pepsi wasn't on the menu."

At first I thought this idea was crazy, and luckily I wasn't eating a sandwich, when I read it. For as long as I can remember I have listened to the news, usually in the form of NPR's All Things Considered.

The first time I heard All Things Considered, I was in the car with my wrestling coach on the way to a tournament. He turned it on, and at first I was annoyed, because I thought NPR was "for old people."

But my wrestling coach was not a man to be trifled with so I just bit my tongue and before long I was hooked. Not only did listening to NPR make me feel like a grown-up, it made me feel sophisticated, and later when FOX News came on the air, it also made me feel superior.

Thus began my life-long habit of listening to the news. I listened to it in the car, in the shower, and walking to the grocery store. And why wouldn't I? The news was fascinating. It took me away to a world where countries rose and fell, big ideas were discussed, and powerful forces battled over the lives of thousands.

So when I read this passage in The 4 Hour Work Week I was blown away. How could any intelligent person not listen to the news?

But I know from experience that anything I resist is probably something I should investigate, so I decided take a break from listening to the news and see what it was like.

And do you know what happened? Nothing. I didn't even notice.

A few times I missed listening to it, but mostly it simply vanished from my awareness. And so I kept doing it and before long I began to see why Mr. Ferris suggested this simple but powerful practice.

Why You Should Stop Listening To The News

1. It's depressing.
Mostly the news is about war, racial conflict, and destruction. And, well, I just don't need to be reminded of how much suffering there is in the world, because all you have to do to see suffering is look.

The Buddha taught that suffering is all around us, but the news can blind us to this. You think, "Well I'm not in a war zone so I don't have it all that bad, while you sit through another boring meeting at a job you hate."

If you stop listening to the news you may realize that the first set of problems you need to face aren't in another country, but in your very life.

2. You can't do anything about it.
Ninety-nine percent of the news is un-actionable (unless it's time for an election and you should probably pay attention to a debate or two.) The rest of the time you can't do anything about what's going on in Syria or Iraq. Even more so you probably aren't going to try to change it, so why listen? If you want to go to Iraq and help out then listening to the news can help you know when you should leave, but otherwise you might as well ignore it, because it won't make a difference, unless you decide to make it your work.

3. It fills your head.
The best ideas, the best wisdom, and the most compassionate responses comes from a mostly empty mind.

If you want to change the world and bring your best self forward in every part of your life, then you need to stop filling your head with random crap and instead let it be open and spacious.

As Tim says, "Most information is time-consuming, negative, irrelevant to your goals, and outside of your influence. I challenge you to look at whatever you read or watched today and tell me that it wasn't at least two of the four."

And I challenge you to do the same. For one week stop listening, watching, or reading the news.
And then ask yourself how is your life really different? What did I really miss? What is the cost of paying attention to the news?

The only good argument I've heard for paying attention to the news is that I might miss something really important. If it's really important someone will tell you. I didn't find out about the 9/11 attacks from the news; I found out from a neighbor. If shit really hits the fan, someone will tell you. Otherwise you're better off remaining in the dark. Not because the world doesn't matter, but because just listening to the news is a crappy way to change it.

Please for the love of God and all things holy stop listening to, watching, or reading the news for one week and see what happens.

Either that or tell me why I'm wrong in the comments below, because I've got to find something else to do with all this extra time now anyway.

We're Eating More Eggs Than Ever. Should We Avoid Eating The Yolks?