It's kind of ironic. The very app that has gotten some bad press because of bullying and threats of violence, was created to encourage young people to act out in positive ways to support each other. 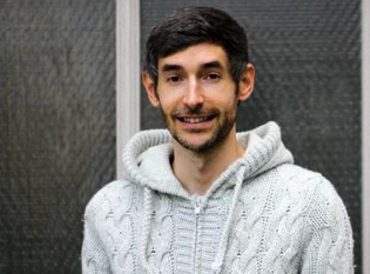 After School, which just announced that it raised $16.4 from some prominent investors, was the brainchild of co-founders Michael Callahan, 33, and Cory Levy, 24, and grew largely from Callahan's personal experiences of being abused as a child and bullied as a teen. "In high school I was tall and thin and would dress outside of the norm. I was the kind of the person that was picked on because I was different." Towards the end of high school he found himself "voluntarily helping other people who had issues. " He said that he "even had adults asking me for advice." And he discovered that "helping other people with their problems helped me with mine. " He told me about a phone call he had when he was 17 with a long-time girl friend who, as she hung up, said "I'm going to kill myself." She didn't. But she did leave Michael with a sense of helplessness because she was three hours away and there was nothing he could do to intervene from that distance.

It was these experiences, he told me, that led him to envision an app that teens could use to express themselves, to reach out to others and to ask for and offer help to fellow teens in distress. He wanted it to be anonymous so that teens didn't face repercussions or ridicule when asking difficult questions or dealing with uncomfortable personal issues. But he and Levy also wanted to create something that was local -- just for kids at the same school.

Listen to Larry Magid's interview with After School's Michael Callahan

They wrote the code and launched the After School app in the fall of 2014 and were shocked at how quickly it took off. "Interest rocketed from 0 to 50% of all US high schools in two weeks, said co-founder Levy. "We didn't have in place yet the ability to monitor and understand the complexities of the eco system," added Callahan. "We then spent time developing safety features."

The company doesn't disclose the exact number of students signed up but claims that it's "the largest social network for teens, replacing Facebook for them as a place to call home."

Callahan struck me as a person who truly regretted the fact that some people had misused his technology platform. As the Washington Post pointed out late last year, there were cases of bullying and at least one case where a student threatened to carry out an attack at school, "I'd rather take my AR 15 to school and practice on my classmates than to the gun range," his attorney told the Post. The student "pleaded guilty to making a terrorist threat and using a computer in a crime and was sentenced to 90 days in jail," according to the Post.

"Our technology had positive and negative use cases," Callahan admitted. "Every time you lower the barrier to communicate, you get richer communications and the ability to fix the world's problems, however you are also going to get closer to things that people are thinking about." He said that "the closer we move to the brain itself, the more it allows you to express unfiltered thought. As new communications technologies emerge, there is more need for safety and precautionary things."

The negative early experiences, as well as Apple's decision to temporarily remove After School from its app store, led Callahan and Levy to re-think the app and engineer in some safety features including a system that employs mostly offshore human moderators who spend a couple of seconds looking at every post to make sure it isn't mean or otherwise inappropriate. There are also filters designed to pick up forbidden words (even "damn" and "hell" along with hard-core profanity) and there is software that attempts of determine if a user is threatening to hurt him or herself or others. The company, said Levy, has developed a system to contact local school authorities and police if a student appears to be a threat to himself or other people.

There is also a reporting system, but unlike most services, all reports result in the immediate removal of allegedly offensive posts. They are reviewed later and restored if the report is found to be invalid, but the company errs on the side of taking down reportedly offensive posts, according to its founders. "With most (social networking) companies, when you flag something, their systems require multiple people to make the decision to take it down," said Callahan. "With After School, if you report it, it's gone." 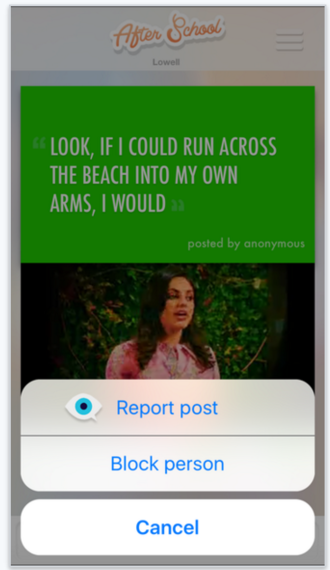 Also, the app has parental controls that allow a parent to limit what their child can do with the app, including the types of updates that can be posted or read.

Callahan and Levy said that After School is committed to encouraging young people to engage in positive actions. They have formed an alliance with DoSomething.org to empower high school students to take on causes such as fighting discrimination and poverty to fighting for a better environment.

Technology The Power Of Humanity