Rapper M.I.A., fresh from performing several stints in the shady Olympics, has taken her lovely foot out of her mouth just long enough to produce what she suggests will be her last album, "AIM." Black allies and fans who have enjoyed her brand of conscious alternative hip-hop music since her "Becky Done Gun and "Paper Planes" days have to confront the ethics of supporting a fellow person of color who has lately proven she isn't as down with the cause as her social justice-infused oeuvre suggests. 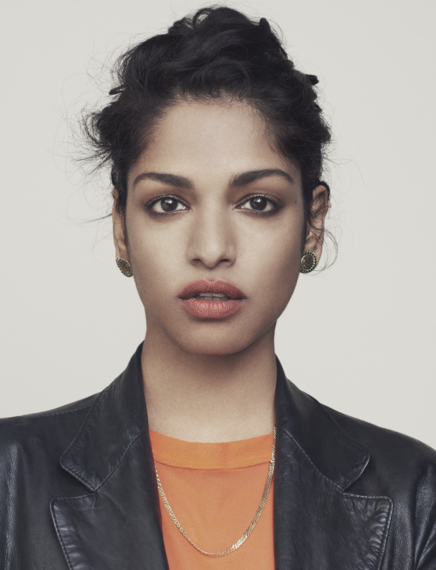 Released Sept. 9 to mixed to positive reviews, this album for people who have been through some things is described by M.I.A as being about "not hating." The track "Ali R U OK" meets listeners where they live in their humdrum workaday lives, offering a chance to shake things up: "All your best days are given to your boss way / Tell 'em you're working on us today / Do you wanna be running after money / Or be home hanging with your honey? / Now come here, show me how you're loving me." On "Talk," M.I.A. offers a dose of self-awareness with the hook, "I talk and talk until I piss 'em off / I talk, talk, talk. "Borders," out since last fall, takes on the language of social barriers people erect like "being bae" or "love wins" and juxtaposes them against high-stakes scenarios and contemporary news hooks like borders, broke people and boat people. M.I.A, nee Mathangi "Maya" Arulpragasam, sings: "Borders (What's up with that?)/ Politics (What's up with that?)/ Police shots (What's up with that?)/ Identities (What's up with that?)/ Your privilege (What's up with that?)

But first, what's up with the collective side-eye M.I.A. instigated in April during the Anglo-Sri Lankan's infamous interview with U.K. magazine Evening Standard. That's when she came for the Black Lives Matter movement and criticized the queen herself, Beyonce, who just freed all black womanhood from bad relationships with a frosty glass of "Lemonade." She also wrapped Kendrick Lamar into her misguided notions of allyship when she told the magazine: "It's interesting that in America the problem you're allowed to talk about is Black Lives Matter. It's not a new thing to me -- it's what Lauryn Hill was saying in the 1990s or Public Enemy in the 1980s. Is Beyoncé or Kendrick Lamar going to say Muslim Lives Matter? Or Syrian Lives Matter? Or this kid in Pakistan matters? That's a more interesting question. You can't ask it on a song that's on Apple, you cannot ask it on an American TV programme, you cannot create that tag on Twitter, Michelle Obama is not going to hump you back."

As the ol' black women of yore used to say: Chile.

Smith College Africana Studies Prof. J.T. Roane says something in "lost in the sauce": "A significant number of Muslims who face the terror of U.S. and U.S. bombs are black. And there is a politics to naming refugees as non-black when we know that some of the places producing the least visible and most vulnerable refugees are black nations.

The reality, says Margena Christian, a professor at the University of Illinois at Chicago and a long-time entertainment journalist is people, including M.I.A., really do believe all lives matter -- except for black ones: "She was seriously misguided in her statement by making an attempt to pit two already marginalized groups against each other. It was equally unwise of her to compare the lyrical messages and social awareness that Lauryn Hill and Public Enemy fostered in their music with that of Beyonce's current stance, as if keeping people conscious and 'woke' about the value of African-Americans' lives is some kind of fad or has an expiration."

"You can see how she has aligned herself with hip-hop, but you don't see her saying 'we are also black people.' It's an interesting problem because she's old enough to have some memory of people like her aligning themselves with blackness." -- Prof. Cherise Smith, UT Austin professor of African-American and African Diaspora Art

More important, what about the solidarity people of color globally share with black people, asks University of Texas at Austin's Cherise Smith, Ph.D., who is heading up a black diasporas conference in Austin in late September so scholars and activists can connect commonalities of the lived experience of black people around the world. This is considered a critical first step in creating global solidarity from a black perspective. When Smith studied in the U.K. in the late '80s and early '90s, she vividly recalls people who identified as South Asian or Pakistani or were from other parts of Asia aligning themselves with blackness: "M.I.A. doesn't seem to be one of those people," Smith says. "You can see how she has aligned herself with hip-hop, but you don't see her saying 'we are also black people.' It's an interesting problem because she's old enough to have some memory of people like her aligning themselves with blackness."

While M.I.A. interpreted criticisms aimed at her as a demand to stay in her lane, Sevonna Brown, a Brooklyn-based reproductive rights activist, says the outcry is really a demand for allies to do better: "There are ways to be in solidarity and allyship with other POC [people of color] movements by showing up to support, sacrificing your physical and emotional labor, and being a voice when solicited. Her aggressive tantrums and public fits are making her less of an ally and more of a bully to the movement space."

Of course, M.I.A., who is as talented at creating controversy as she is creating music clearly doesn't learn from her experiences with backlash. Remember the time she gave the middle-finger to a 2012 Super Bowl audience while performing "Give Me All Your Luvin" with Nicki Minaj and Madonna, or she picked a fight with everyone's favorite news bae Anderson Cooper over coverage of Sri Lanka? She's proven herself a tone-deaf equal opportunity offender, tweeting that she wasn't aiming at Beyonce but critiquing what American platforms "allow you to stand up for in 2016."

Disinvited to headline this year's Afropunk London because of negative feelings she engendered, M.I.A. embodies the ethos of the #NotYourMule hashtag created by writer Mikki Kendall and embraced by the black twitterati during this year's Oscars. It eloquently and succinctly evokes Zora Neale Hurston's words in "Their Eyes Were Watching God" about black women being the mules of the world. But see, it's 2016, and M.I.A. missed a beat by conveniently forgetting black women or black people are not soley bound to do the heavily lifting of social justice or civil rights globally.

Deborah Douglas is a Chicago-based writer who teaches at Northwestern University.