There's look of steely determination on his face. It's a look I've seen many times before. As a physical therapist I have the privilege of working alongside people in some of the most challenging - and vulnerable - periods of their lives. John is no different. He had a stroke some two months prior to this session and these are the first steps he has taken by himself since. He's walked with my support a number of times and by himself in between the parallel bars, but today, for the first time, it's just him, his cane, and his determination. It's a key moment in his rehabilitation process.

The setting is a hospital in Northern Namibia. To have rehabilitation services in a health setting in a low-income context is quite a rarity. In fact, if you layer need for rehabilitation over access to it, as a 2011 study did, you see that right where the needs are highest--in low- and middle-income countries--you find the fewest skilled health professionals. At the moment, it is simply not a priority.

The current Millennium Development Goals, the eight objectives the world set itself to achieve by 2015 back in 2000, may not be projected to fully achieve their targets, but they have undoubtedly brought improved life expectancy from 15 years ago. Three goals relate directly to health, and all three have marked tangible improvements: the number of maternal, child, HIV/AIDS, and malaria-related deaths are all dropping.

The impact of this is clear - we are living in a world that is living longer, but a growing number of people are living with health issues or disabilities. Yet the global health community does not seem to be taking the steps to address this shift.

The organization I work for, Handicap International, is best known for providing rehabilitation services in conflict or disaster contexts-our start in 1982 was in support of victims of landmines. However, when I visit our teams around the world, those are not the first stories I hear. Instead, it's of people coming to our rehab centers with conditions and impairments as familiar in the U.K. or U.S.: older people with strokes, arthritis, visual and hearing loss, people of all ages with diabetes and cancers, children with cerebral palsy, birth impairments and intellectual disabilities, and people who have been injured in road accidents. 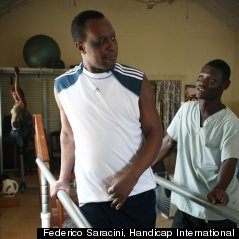 The data also speaks to this: It is estimated that globally every 20 seconds someone loses a leg to diabetes. Put into perspective that is a rate over 360 times higher than landmines or a daily rate exceeding the total number of amputations as a result of the Haiti earthquake.

It is one thing identifying a problem, however, and another thing proposing how the world can prepare and respond for these new, emerging trends. In an already crowded development agenda, new issues are difficult to bring to the fore.

A common reaction I hear when I talk of these trends to anyone outside of Handicap International is sympathetic but unmoved: "We can't start new things until we finish what we've started" seems to be a common sentiment. It shouldn't be either or.

I'm not so unrealistic to think that rehabilitation is a panacea that is going to address all of the challenges of a changing demographic. It won't. It can't. But it will be a piece of the puzzle to addressing a better health situation for an older world population.

We must also seek to break down the many societal barriers those persons with disabilities face to enable a society for all. In fact, approaches such as universal design, while conceptualized with people with disabilities in mind, have been shown to benefit a much wider section of society, including children and older people.

I'm hopeful that the post-2015 agenda will take into consideration health for everyone, across a life course. If it does, more people like John will be able to focus their determination to get back on their roads to recovery.