Last Friday, my husband and I represented our company, Sseko Designs, on an episode of ABC's Shark Tank.

We knew walking into the Tank that our social enterprise based in East Africa might not be the best fit for five all-star billionaire entrepreneurs who are playing by the rules of capitalism and #WINNING. But hey, what's the harm in asking...in front of six million people? 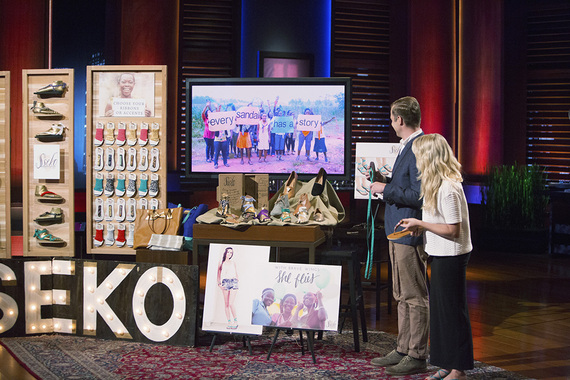 Spoiler alert! We didn't get a deal from the infamous sharks. (Although, we've since raised 100 percent of our investment amount from non-reality TV show investors at the same "crazy" valuation we proposed on the show.)

The entire experience was fascinating, but perhaps most interesting was the feedback we received from the Sharks on how they think social change should be incorporated into a business.

You want to use business to change the world? Then get really rich, really fast. Then you can give your money away to whomever you please.

Poor kids! Homeless people! Get rich and then you can give, give, give all you want. Give shoes! Money! Clothes! Why, you could even build an orphanage!

And while there is nothing intrinsically wrong with traditional philanthropy and charity (there is absolutely a need for charitable organizations in every society) what we're trying to do is fundamentally different. We're trying to use business to solve a problem traditionally left to the charitable sector.

Charitable contributions make up approximately two percent of America's GDP. And it's been at two percent for almost four decades. Consumer spending? Now that represents a whopping 68 percent of our GDP.

We want to help create opportunity for women and girls living in extreme poverty. And we could certainly try to achieve that goal by starting yet another charity. (In fact, I almost did.) But here's the thing: Even though there have been thousands of new charities created over the past several years, the charitable giving pie isn't getting bigger-- it's just dispersing.

So, why would we try to compete for the limited donor dollars that are (hopefully) going towards charitable causes where there are truly no market-based solutions when we could be competing for a piece of a much bigger pie and creating a scalable, long-term solution? The truth is, yes, we need money to create opportunity for women and girls in East Africa. But I'd much rather have the money that you almost spent on those mass-produced sandals manufactured in China than the money you were going to donate to your local domestic violence shelter.

So at Sseko, we don't do charity. We're not philanthropists. We're convinced we can use business to make a dent in the universe for women and girls. But, contrary to the feedback we received from the Sharks, we're not going to wait until we get really, really rich to start making a difference in the world.

Our impact doesn't start when we get rich. It started on day one -- it's baked into the very DNA of our company. We employ women to make beautiful footwear and accessories. And in doing so, they're earning money towards their college degrees so that they can stop the cycle of poverty for themselves, and their families and go on to pursue dreams of their own. We match their savings with scholarships and provide our employees with comprehensive health coverage and social benefit curriculum.

And we do 100 percent of that, not through donor dollars, but through our revenues. Now to be completely fair, we are making intentional decisions that require a little more time for us to hit profitability. But we truly believe that these decisions will lead to the long-term financial and cultural health of our company.

But perhaps most importantly, the bright, driven, passionate women we have the privilege of working with don't want to be recipients of after-you-get-rich-charity. The women we work alongside are able-bodied, brilliant and hungry for real opportunity. They desire to be wage earning, contributing members of mainstream society. 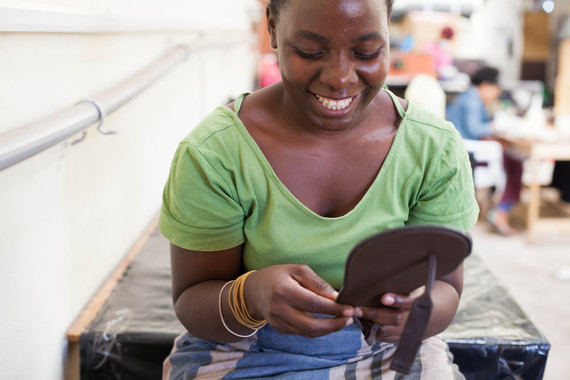 So that's what we're doing. We're in it together. No "giver" and no "receivers." No "donors" and "beneficiaries."

Sseko either sinks or it swims, but we're going to do it together. We're designers and accountants and marketers and quality control experts and supply chain managers and seamstresses -- each of us bringing our best to the table with the hope of building the impossible together.

When Kevin O'Leary offered to give us the investment we were seeking in exchange for half of our company and we turned him down, our entire workshop in Uganda erupted in cheers.

You know what is really energizing? Hearing a Ugandan woman who grew up in extreme poverty say, "We don't need that rich Mizungu (white man) to succeed. We're team Sseko. We'll do it without him."

That's the story I want to be a part of. Sharks or no sharks. We'll keep swimming.