It's been a zany and frenzied year. Ripping out of the starting gate in snowy January for lofty Sundance, then roaring across and around America for months to attend 30-plus film festivals -- big and small, stellar and stinker, weird and restrained -- then jumping across the autumn ocean to old Europe for more festivals, and now camped in a cavernous Amsterdam coffee shop listening to a heavy buzz in my pleasantly oscillating head. Free of my battered, vibrating road-body, with mind again grinning wide, the nearly one year of grueling road-ripping has become a florescent sparkle in my glowing memory. Yes, it has been a humdinger of a bizarre year.

It just occurred to me that maybe, just maybe, a year on this wacky film festival circuit has stomped my four decades long addiction to war journalism. Wait! I just jumped the track. It's necessary to stay focused.

In the States, film festival audiences are heavily gray haired while the filmmakers are much younger, which creates a festival gap. This can result in too many films being an utter bore to the vast majority of the viewers. In Europe the festivals tend to attract a more mixed audience with a significant number of older filmmakers, resulting in less of a gap. In Amsterdam I'm ducking films that beam youthful enthusiasm and those about youth in crises because of horniness. I'm ripe for cinema that looks back in time to something different than naivete and boners.

Screening nearly 300 non-fiction films, the Independent Documentary Festival Amsterdam is the largest and the most prestigious documentary-only film festival in the world. There are lots of films that look back, and from the program I select two that look back to -- well, let's just say old addictions are very hard to break. 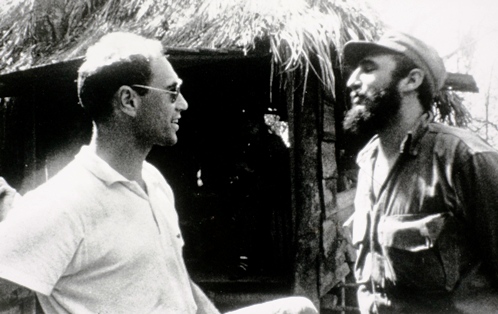 Finding Fidel: The Journey of Erik Durschmied is an intriguing documentary that looks back a half century to when a young and unknown journalist named Erik Durschmied arrived in Cuba and after an arduous trek in the Sierra Maestra Mountains located the rebel's camp and interviewed Fidel Castro.

One of the first journalists to tape interview the charismatic Castro, who at that time was still uneasy in front of the camera, Durschmied's footage was soon seen around the world. This jump started his career as a war journalist that would last for more than 30 years, from the Cuban Revolution to the Gulf War.

With director Bay Weyman and brother James, Erik Durschmied, an Austrian who became a Canadian citizen, returned to Cuba in 2008 for the 50th Anniversary of the Cuban Revolution. Together they retrace the journalist's historical journey as Durschmied interjects personal memories that are intercut with his half century ago interview of Castro. Finding Fidel: The Journey of Erik Durschmied is a travelogue with suspense -- the group was denied visas to shoot in Cuba -- although mostly a reflective memoir that examines a former war journalist's nostalgic return 50 years later to where it all began. Last Chapter journeys back a quarter of a century, when Swedish journalist Pieter Torbiörnsson was covering the war in Nicaraguan and a planted bomb exploded during a press conference killing four and wounding several dozen. Directed by Sista Kapitlet and Torbiörnsson, the documentary records the journalist's return to Nicaragua to investigate exactly who was responsible for the catastrophic bombing.

A detective story with pondering narration, Torbiörnsson feels partially responsible for the bombing since he facilitated the bomber's access to the press conference. Yet, others are guiltier -- those who convinced the unknowing journalist to vouch for the clandestine bomber: Sandinista officials! Ironically, like nearly all the international journalists in Nicaragua at that time, Torbiörnsson was a strong supporter of the Sandinistas.

Peter Torbiörnsson's story of his return to Nicaragua is obviously quite different from Erik Durschmied's return to Cuba. Instead of an engaging journey down memory lane to where a successful career was launched, Torbiörnsson travels to where his career in war journalism was destroyed and the lives of companions were lost. Last Chapter is about the dark side.

Durschmied understands that Fidel Castro used him, an inexperienced cameraman, to deliver a moderate message to the world, a world that hardly knew anything about the man who would soon rule Cuba. Castro is seen in the 1958 interview saying he wants representative democracy and free elections, he will not confiscate private land, and he is not a communist -- all of which turned out to be baloney. And Durschmied realizes that he also used Castro. His interview of the guerrilla leader launched his long and very successful career in war journalism. For Peter Torbiörnsson, understanding that the Sandinistas manipulated him to assist a bomber kill and maim fellow journalists has no upside. It's only dark.

For a quarter century, the Swedish journalist has struggled with uncertainty, depression, and guilt, while many of his former colleagues have shunned him. Acquiring a firmer understanding that members of the Sandinista movement used him -- which he does acquire during his return to Nicaragua -- does not set Torbiörnsson free. There is no happy ending in Last Chapter.

Finding Fidel and Last Chapter both revolve around a critical event during a war in Latin America. Both men were affected strongly yet very differently. So Finding Fidel is warm and reflective, and Eric Durschmied has a pleasant surprise in the old rebel camp. Last Chapter is heavy with remorse and pain, and when Peter Torbiörnsson finally confronts Thomas Borge -- the Sandinista probably most responsible for ordering the slaughter in the press conference -- the results are ungratifying.

The horror of 25 years ago in Nicaragua will live forever in Peter Torbiörnsson, while the fortune 50 years ago in Cuba will never be forgotten by Erik Durschmied. War can change an entire life in a second. In a second life can end. In a second one can be famous. In a second anything can happen. These two excellent documentaries chronicle the high stakes in the roll of the dice called war. It's a crap game that some just can't leave, until they're dead.

As for me, tomorrow at the International Documentary Festival Amsterdam I will watch Armadillo, which is about an entirely different subject. Well, sort of. It's about war, but in a different part of the world.