HELL'S KITCHEN, New York -- When I shook hands with Hillary Clinton after her rally on the West Side, I kindly asked if she would sign my Bernie Sanders book. Clinton didn't answer, of course, and probably didn't even hear me.

However, one of her Secret Service agents did hear me and responded on Clinton's behalf. "She only signs her books," he said. 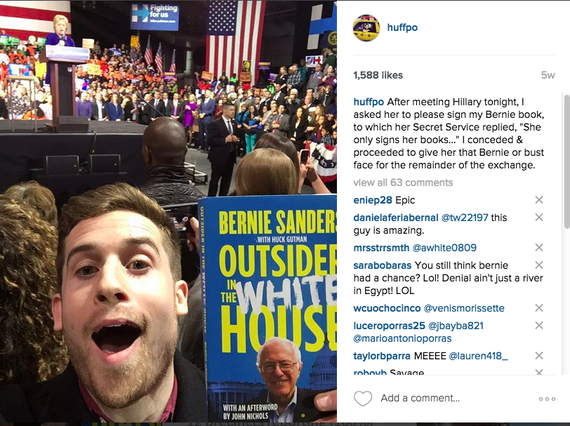 What impressed me most about Clinton's rally, was not the book signing policy, but the esteemed lineup of politicians who gave opening speeches. Included among them were New York City Mayor Bill de Blasio and New York Governor Andrew Cuomo. Clinton's establishment support in this all-important state couldn't be any stronger.

There were fewer than 1,000 people there in the Javits Center celebrating Clinton's "homecoming." Full disclosure: New York is not actually the place of Clinton's birth. She grew up in Illinois, but served as a New York Senator for eight years.

Bernie Sanders, on the other hand, was born and raised in Brooklyn. Yet it was Clinton who opened her speech exclaiming: "Wow! It is so good to be home!"

Apparently, later in the speech, someone spotted me representing Bernie Sanders and made a meme out of it. Video below.

At one point, a peaceful protestor attempted to interrupt Clinton's speech, but the polished politician spoke over him. Nevertheless, the protestor, who was eventually escorted out by Clinton's Secret Service, continued to shout, "I am a young black man and I refuse to be brought to heel," referring to a controversial statement Clinton made in the '90s.

To the best of my knowledge, no mainstream media outlet reported the incident, which struck me as odd because it was easily the single most significant and interesting thing that happened during Clinton's rally. 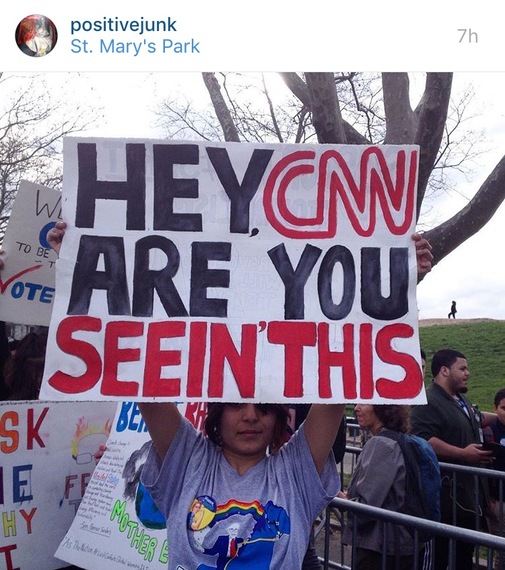 Not a single establishment politician took to the podium to introduce Sanders. Instead, actress Rosario Dawson, rapper Residente and director Spike Lee delivered pump-up speeches, back to back to back, in front of a crowd that grew so large that spectators started climbing trees and fences for a better view. 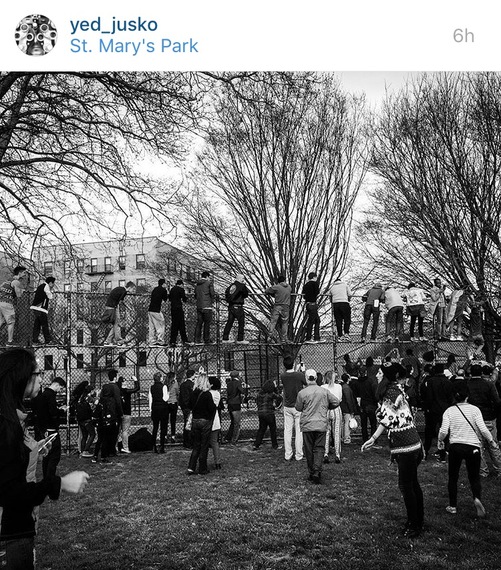 In contrast to Clinton's rally in New York, Sanders' had not only attracted nearly twenty times the people, but the tens of thousands of Sanders supporters also came bearing thousands of homemade signs, puppets and don't forget, free hugs. 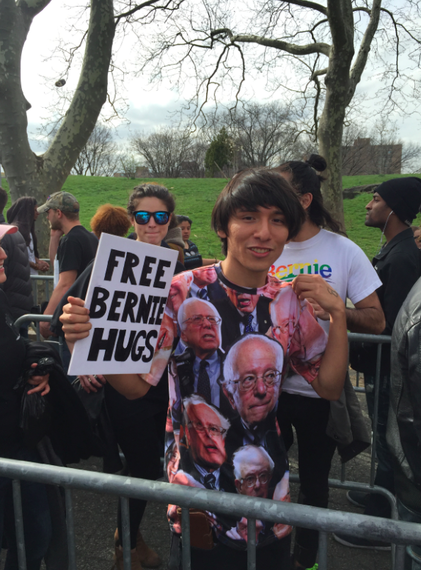 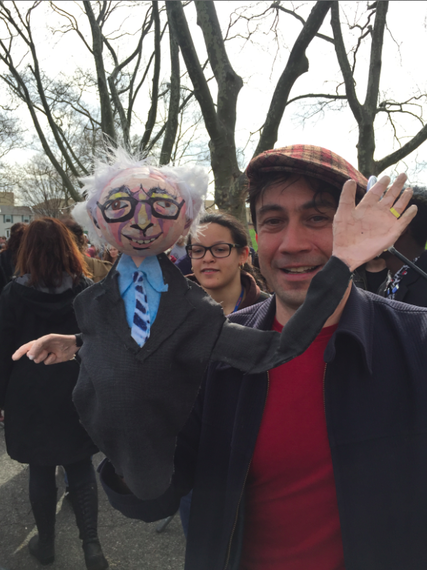 Most of the signs at Clinton's rally were distributed by the campaign itself. I certainly did not see any costumes or fanatical behavior of any sort. 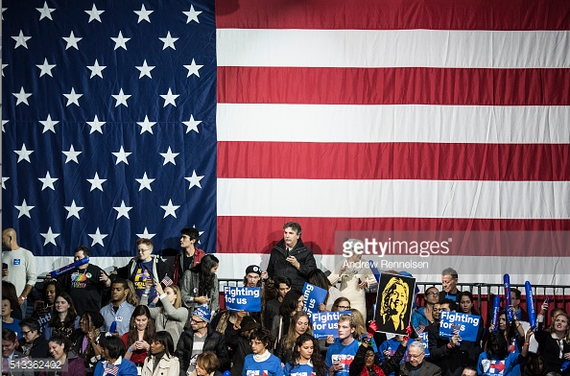 This is not to say that Clinton supporters are not enthusiastic, but the passion gap between them and Sanders supporters is abundantly clear. 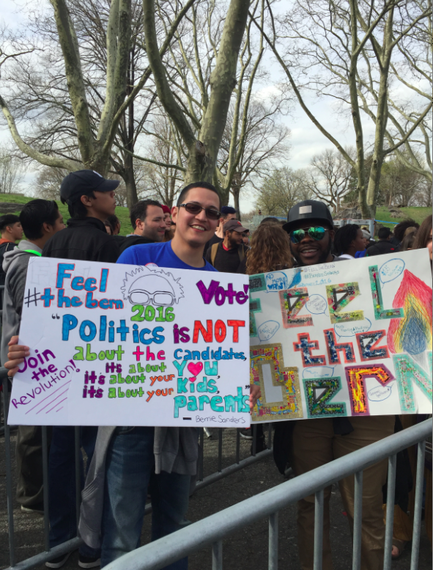 By the time the now hoarse Bernie Sanders finished delivering his speech, some people had been standing on their feet for over 8 hours. Before departing, Sanders did a quick round of handshakes to the folks lucky enough to snag a spot in the front row.

I, fortunately, was one of the folks. However, when I reached out to shake Sanders' hand, he brushed past me. Distracted by so many flashes, and blockaded by Secret Service, Sanders couldn't possibly take every handshake that came his way.

But I had come too far to miss making physical contact with both Democratic candidates for president.

Before Sanders walked away and at the risk of getting tased, I lunged towards him and was able to just barely make contact with his hand as he shook someone else's. 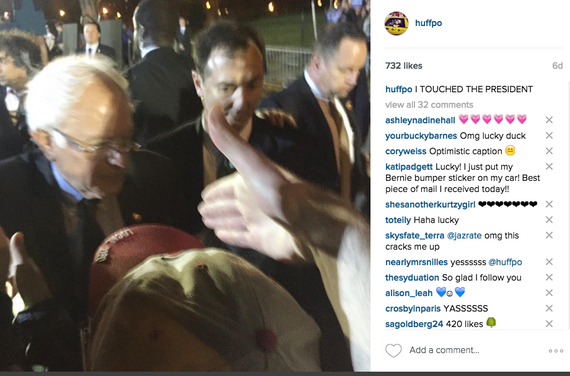 That Sanders rally in the Bronx changed the way I look at politics. It didn't even feel political. It was so full of life and love and hope and togetherness.

Politics is not about winning or losing, although winning is so often the goal.

It's about bringing people together.

What Sanders has done, in organizing a populist movement, a revolution even, transcends the 2016 election. It transcends American politics. 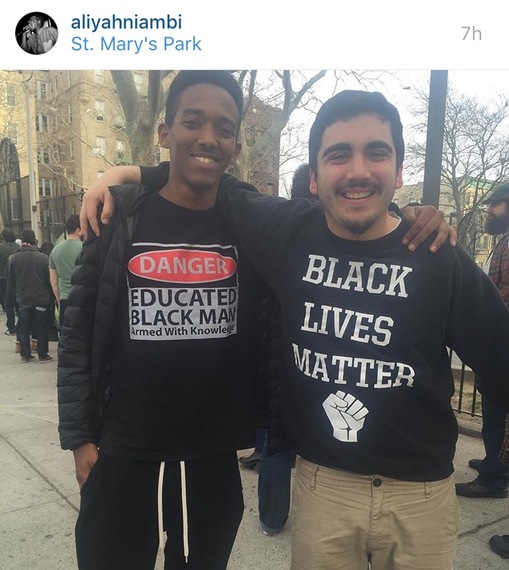 Sanders has given a voice to the voiceless. He has engaged millions who had previously given up on the political process.

One young Sanders supporter, Francisco Donoso, also attended the rally in the Bronx and was kind enough to share his experience with me:

"The Bernie rally in the Bronx was attended by so many different kinds of people, multigenerational and multicultural. As an undocumented immigrant who has grown up in the US, I've never felt like I belonged to any political sphere, but was rather a pawn in politics, as many other immigrants have been in this country. Bernie's campaign is the first time, ever, that I have seen myself and my people represented on that platform in a way that empowers us, recognizes us and fights and speaks for us, not just 'about' us. I feel like I can fight for his election and actually be rewarded for it. Bernie is one of us and his views AND actions prove that he is invested in the people of this great country and not the corporations and deep Wall Street wallets that Hillary and the establishment are so connected with. Looking around the crowds at the rally, you could tell my experience was shared by many. I think a lot of first time voters and first timers like myself are uniting under Bernie."

Another Sanders supporter summed up the rally rather beautifully: "It was an unspoken understanding that we all had, we were all there for each other," she said.

The fate of the 2016 Democratic primary may very well come down to the New York primary and the excitement that these rallies generate.