The recent flood in my hometown Tbilisi, the capital of Georgia, has drawn international attention and thousands of volunteers from across the country. Many have applauded the efforts, especially by young people, to help rebuild the city and support fellow citizens affected by the natural disaster. Indeed, it is admirable to see generations of Georgians united by disaster, stirring up images of Noah's Ark.

What saddens me is the fact that it takes a catastrophe to unite a nation otherwise divided by deep political and social differences.

Some criticized the management of the city zoo for the fact that many animals escaped during the flood, while others blamed former President Mikheil Saakashvili for the poor quality of the infrastructure built under his presidency, specifically Mziuri Park built toward the end of his term.

Not surprisingly, the blame was extended to the current government under President Giorgi Margvelashvili and former Prime Minister Bidzina Ivanishvili. It is worth noting that even Patriarch Ilia II, the head of the Georgian Orthodox Church, believes the devastation to be divine retribution for the Communist persecution of Christians during the Soviet era.

This persecution was tied to of the creation of the zoo itself. "When the Communist regime was established in Georgia, it ordered that all the crosses and bells in churches be melted down and the money be used to build the zoo," he said.

One of the most heartbreaking photographs from the aftermath of the flood is an image of a schoolbook covered in mud. The purple book's title ''Word Building'' is written in bold font. Childhood memories immediately flooded in, as I recalled studying with the same textbook at the newly opened School of Tomorrow in Tbilisi as a second-grader in 1992. Alas, today, very little remains of the 250-student institution. 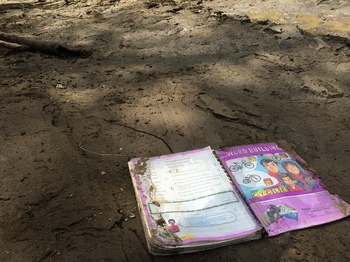 According to Georgian media, just a few days ago an African penguin from the Tbilisi zoo was spotted swimming near a bridge at the international border separating Georgia from neighboring Azerbaijan. It has now been confirmed that the penguin successfully completed the trip to Azerbaijan. (The distance from Tbilisi to the bridge is about 60 kilometers.)

If it takes a village to raise a child, it may be fair to say that it also takes children to rebuild and protect that village from future disasters. Politicians will continue to criticize and blame one another for this and that. But I remain hopeful that instead of continuing to follow in their footsteps, our civilians will come together not only in times of despair and tragedy but remain united as a team throughout times of peace and prosperity.

Ultimately, we cannot forget that underneath the specific agenda of most politicians lies, first and foremost, a personal agenda followed by the well-being and prosperity of the nation as a whole.

Instead of looking to and endlessly criticizing them, perhaps we should rely on one another and invest that energy into our collective safety and prosperity. Easier said than done.

Alas, after reading numerous posts and comments on social media sites penned by fellow Georgians, I cannot help but sense the opposite tendency.