I got hugged by Amma on Tuesday. When Kelly Cutrone of People's Revolution (and star of The City and Kell on Earth and, of course, a Huffington Post blogger ) invited me to meet India's so-called Hugging Saint, for whom she does P.R. pro bono, how could I say no?

According to her website, "for the past 35 years Amma has dedicated her life to the uplifting of suffering humanity through the simplest of gestures -- an embrace. In this intimate manner Amma had blessed and consoled more than 25 million people throughout the world," sometimes offering hugs ("darshan") for over 22 hours straight.

But I should put it out there that Amma is so much more than a hugger. She's first and foremost a humanitarian who, according to press materials, has raised over $48 million to "provide food for the hungry, homes for the homeless and hugs for the lonely." She's also worked and traveled to relieve suffering in post-Katrina New Orleans, post-tsunami Asia, and post-earthquake Haiti. She's not affiliated with any religion, saying the only religion she practices is love.

And she also happens to give a really good hug.

Two friends and I walked into New York's Manhattan Center, where Amma had been hugging for three days. The auditorium was filled with incense, people dressed in white (my friends and I never got that memo), and chanting. I won't lie: I was completely intimidated. I've done meditation retreats before, but those were with hippies and a few Buddhist monks in Vermont, and they were mostly silent. There was a lot more -- auditorily, visually, olfactorily -- to take in here.

Kelly arranged for us to sit down with a Swamiji who works as Amma's North American tour director. He was draped in orange robes, and even whipped out an orange iPhone when it rang. (That was pretty rad.) He told us he met Amma 28 years ago when, as a documentary filmmaker, he approached her about being a subject. During their second meeting, he watched her hug a man with the worst case of leprosy he had ever seen. After Amma kissed an open sore, the Swamiji was convinced that she was the most compassionate person he had ever met.

He also said she typically gets only one hour of sleep per night because there's so much work to be done.

At one point during our conversation, Russell Simmons walked in with a model and a camera crew.

I was led to the front of the line, which I hope I don't pay for in another life, and as I sat two hugs away from Amma's bosom, I got a little choked up. Seeing all the people who had come to Amma for relief from suffering -- some in wheelchairs, some carrying photos of loved ones -- was pretty powerful.

I was then led to kneel down before Amma and I just went for it. I buried my face in her pillowy hug as she chanted something in my ear -- someone later told me the words meant something along the lines "my little one, my daughter" -- for about 10 seconds. It's also worth mentioning that she smells amazing. Like talcum powder mixed with lavender.

Here's how it looked: 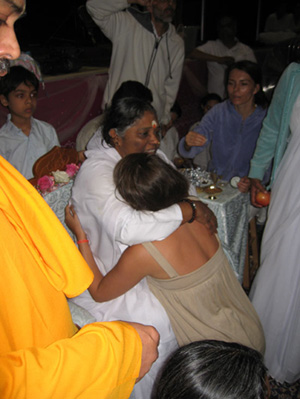 (That's the Swamiji on the left.)

Amma then pulled away from me, smiled and said something like "Ah!" Then one of her assistants handed me a blessed apple and Hershey's Kiss. I ate the apple (which is allowed).

By the way, a little later, on the live stream that was projected in the auditorium, I watched Russell Simmons kneel before Amma for his hug. But first there was a lot of negotiating about the release she had to sign to appear on camera. I would normally insert a snarky comment here, but at the moment I'm too filled with love. Thank you, Amma.