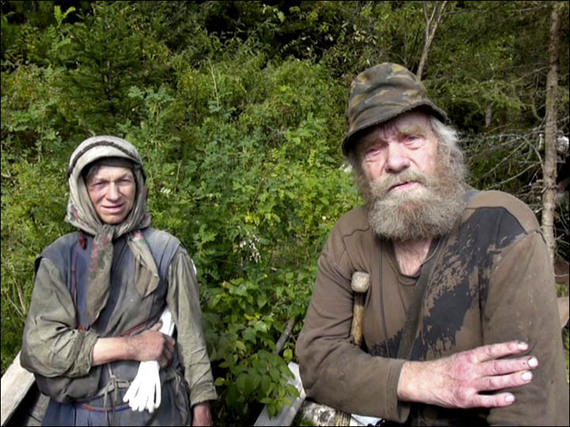 The news about 70-year-old hermit Agafia Lykova, who was airlifted out of the Siberian forest, made headlines recently. More intriguing than being a female hermit is she is the last survivor of a religious family that had no clue World War II had even taken place. Fleeing the religious persecution of the Bolsheviks, the Lykov family disappeared 150 miles into the wilderness in 1936.

Even before they locked themselves away from others, the Lykovs were already outsiders. They clung to a 17th-century religious interpretation of Christianity that broke off from the mainstream. Known as the "Old Believers," when the Lykov family was discovered in 1978, the two daughters spoke in a combination of vocabulary that only remained in existence in their 400-year-old prayer book, early century Russian, and made-up language visitors described as sounding like "cooing."

Agafia, who was born on the reclusive homestead, had not seen anything of modern life except the debris of Russian rockets that fell, and still remain, near their cabin. Until their discovery in 1978 by a team doing an aerial geological survey, the Lykovs hadn't seen other humans for 40 years. Since Agafia, the youngest, was born there, she had never seen anyone outside of her parents, two brothers, and two sisters.

In the documentaries by RT Documentary and Vice, Agafia looks like what you'd expect. Her front teeth are ground down by her diet of nuts, her skin is weathered, her clothes are layers of dull-colored garments. Since the discovery, she's received some assistance from the outside--a dog, chicken, goat, clothes, flour and other foodstuffs.

If the family had been discovered earlier, perhaps her mother would have lived past 1961. The ultimate sacrifice, mother Akulina let herself starve during an extremely lean harvest year so her children could eat.

But, if the Lykovs had not been discovered, perhaps Agafia's three siblings would have survived. All died of pneumonia in 1981 within a short time of each other, perhaps from contact with outsiders. The last family member to pass was the patriarch, a man Agafia gets tears in her eyes talking about in the RT documentary.

Last year Agafia buried another person. Yerofei Sedov. A geologist who first ventured to meet the family in 1978, he later moved into a cabin down the hill from Agafia. Like a pirate caricature, he had a peg leg and a beard as gruff as his personality.

Agafia and her father Karp had prayed for a male companion to help her, but Sedov is who she ended up with. Although he stated he moved there to help out Agafia, his reasons come into question. He was fired from his job for unknown reasons. And because he had lost a leg due to gangrene, Agafia found herself having to help this man while still continuing with her own planting, harvesting, wood chopping, and cloth weaving. She became the ultimate subservient wife without return.

According to Agafia, years ago Sedov threatened her that if she did not move in with him and act as a wife, he would send a letter to the outside world. He told her they would send police to arrest her. Unaware of how the world worked, she became so distraught she contemplated drowning herself. In documentaries, she shared another incident where Sedov approached her in bed when she was sick. Saying she fought him off, and without giving any details, it is hard to know what happened. Her vague words and expression leave people questioning. Whether speaking of her faith or her crops or Sedov, her mouth remains in a slight smile. Not a simpleton smile, but perhaps one that cannot be contained when she has visitors.

With barely hidden motives, Yerofei Sedov told visiting film crews Agafia had been taken advantage of by her father Karp. Agafia denies this, and if documentaries have the ability to reveal their subjects well, most believe the strict, sin-sensitive Agafia.

Yerofei Sedov was not the only one who "committed sins." Agafia mentions another male visitor. He moved in with Agafia for five days and enacted sin on her, according to her. Again, it is not clear what happened, but these incidents clearly made an impact on Agafia.

For nearly 40 years, visitors -- from journalists to tourists to forest rangers --
all seem to be men. Since her sister Natalia's death in 1981, perhaps the only women she has had contact with have been during her 6 short visits to the city. She grew up with no understanding of female health, no experience with boys, and no support of female friends.

Two weeks ago, when Agafia experienced knee pain, she used the two-way radio left in Sodov's cabin to contact the secular world. Diagnosed with decreased cartilage, she has been treated and will return home soon.

Although her story is one of fascinating endurance and strength, it's been widely overlooked that it is also about the fact that a woman can hide in a Siberian forest and men will still seek her out, attempt to violate her, and use her as a servant. That a man moved 100 yards away from a socially sheltered, physically vulnerable woman -- miles away from watchful eyes -- did not seem to concern anyone.

Being from such an ultra-conservative sect, and her family having come from the era when the Bolsheviks had squelched and reversed any feminist ideas that blossomed during the reign of Tsar Nicholas and his faulty yet headstrong wife Alexandra (assassinated in 1918), it is astonishing that Agafia: 1) Speaks of physically fighting off the men's advances and 2) Does not seem to blame herself for their behavior.

Even after all the reports and documentary films, recent articles still refer to Yerofei Sedov as Agafia's "friend." They also refer to Agafia as a religious hermit. But Sedov was much less than that, and Agafia Lykova much more.