When she was 23 Barbara Thomas left her native Detroit and ventured to New York to try her luck in the Big Apple. One of the first things she did--out of naïveté or just plain chutzpah--was march up to the Guggenheim and ask that they put her work in their next show.

"I was told no," says Thomas, laughing now at the idea. "They said that they didn't show anyone 23 or younger."

Truth or lie? Who knows (probably the latter). But one thing's for sure: It seemed to stiffen her resolve to make it as a painter in New York. 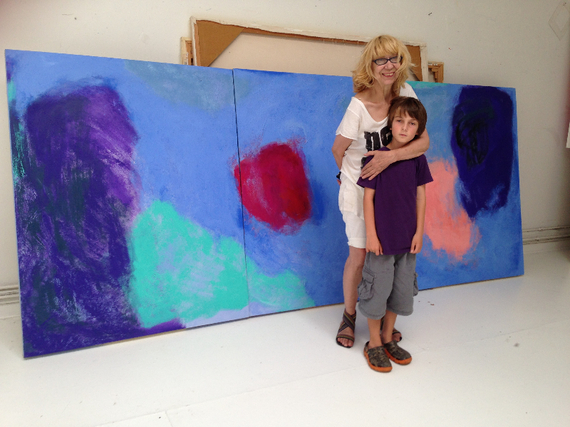 Thomas (above, with a young visitor to her studio) first started selling her paintings when she was 12. They were bought by jazz singers and musicians, who would then invite her over to their houses to watch her work being hung. "I was in awe of them," says Thomas, who also remembers the days of the original Motown music emanating from the Motor City. "They were encouraging and we talked about my work and how an artist could survive. They advised me to take part time jobs and think of myself as a full time artist. That I've done to this day."

So far it's paid off. Thomas has enjoyed one-woman shows in New York, Florida and California. She has also participated in more than a dozen group shows, most recently at Baruch College in New York. And she may be riding the crest of a wave--there is a growing demand for women-themed exhibitions in galleries and museums across the country.

But the road has not always been smooth. Thomas has worked to support herself and her art for more than 30 years, taking jobs as a flower arranger, waitress and substitute teacher. But always, the work came first, even if it meant lean times financially.

"It's taken her a long time to get where she is today," says close friend and independent curator Martha Henry. "It takes real talent and dedication."

In deed, the odds against making it as an artist in the highly competitive world of New York are daunting, especially for a woman. A recent survey found that women were still woefully underrepresented in major museums and galleries across the country. At the Museum of Modern Art in New York, only seven percent of the collections on display last year were by women, even though women make up more than half of all visual artists working today.

"The doors aren't open for a woman," says Thomas, echoing a common complaint. "Financially, you sit in the back seat. You can't make that kind of prejudice go away, but you can continuously try to push the door open."

And that's exactly what she's done, by working.

Thomas paints in series, often using her hand or a cloth to apply the paint to the canvas. It allows more freedom of movement than a brush, she says. Also, she will occasionally add sand to the paint which makes it thicker and gives it a different refraction in the light.

How to describe her work? "She's working with light and color," says Henry. "She's trying to explore how the perception of color changes constantly, how light permeates into color. It's something you can't see right away. It takes time. You've got to live with it."

When not painting her series, Thomas takes a break by creating works on paper with charcoal and pastels. They are much smaller than the bigger works, and they are delicate and beautiful.

Thirty years after being rejected by the Guggenheim, Thomas says she "isn't giving an inch--I'm still doing what I'm doing. I want to keep moving up, to get to a plateau and then move up again. I want to be known as a woman who is succeeding."

For more about Barbara Thomas and her work, go to http://www.barbarathomasbt.com